Jayhawks in dark over next pro foe

Kansas senior guard Travis Releford listens to a tour guide during a tour of the Palace of Versailles on Friday, Aug. 10, 2012, in Versailles, France. 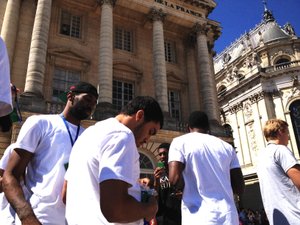 The Kansas men's basketball team toured the Palace of Versailles on Friday, Aug. 10, 2012, in Versailles, France.

“I had lunch with their coaches (Friday), and they’re just putting the team together,” Self said. “They’ve only been together four days now, I think, but it’s pro players from over here in the A and B (French professional) leagues.”

Self said the impression he has is that AMW Team France will be more talented than the Swiss national team (which KU defeated, 79-76 and 83-79, earlier this week) but will have players who haven’t played together nearly as long.

“You could tell talking to the coaches (Friday) that this is a big deal, and they’re taking it serious,” Self said. “I hope our guys do as well. We haven’t played well since we’ve been here. I think there’s a couple reasons for that, but we need to step up and play (today).”

The atmosphere could change as well, as the 3,800-seat stadium is not sold out but should have a much bigger crowd than the two games in Switzerland, which averaged 225 fans.

Self actually has won only one game as head coach during KU’s exhibition trip this week.

During Wednesday’s 83-79 victory over the Swiss national team, Self allowed assistant coach Joe Dooley to be the head man on the sidelines.

Self will coach today’s game before letting assistant Kurtis Townsend take over during the final game Sunday.

“Norm’s been a head coach (at St. John’s) for six years, so he’s called the shots,” Self said, referring to KU assistant coach Norm Roberts. “But these guys haven’t had an opportunity to do so. They need to make their own subs and do some things and do it in a way that I’m in the background.”

Dooley also called the team’s timeouts Wednesday while serving as the mediator with officials.

“We were down three late and ended up winning by four,” Self said, “so he did a good job.”

“Our assistants do a ton of stuff in practice very similar to the way that we did it when I was at Oklahoma State, but they haven’t had any game (head-coaching) experience,” Self said. “This is good for them.”

Self has scheduled a shoot-around from 1 to 2:15 p.m. local time before his team’s game today.

After the run-through, the Jayhawks have planned to go shopping together as a group before relaxing prior to the 8 p.m. local (1 p.m. Central) tipoff.

Could not resist being First!! This great to give the assistants shot at calling their own game and growing the respect of the players.

I wonder if Self has to tape his mouth shut to keep from blurting out advice. When you're used to driving the bus, it's pretty hard to be a passenger.

Kurtis gets the tougher draw.

When I was in Paris with a tour group I had a chance to see the beaches of Normandy instead of Versailles. Even though it was a three and a half hour trip one way and we had a crazy driver, it was well worth it. I would much rather see a place where men sacrificed their lives for freedom than a" royal doghouse" (General Pattons words.)

I believe there's actually a castle near Normany that is right on the coast and is one of the most visited places in France for its beauty.

Excessive opulence more inspiring than total sacrifice. I guess it's always been that way.

Ever been to the Vanderbilt Estate in Asheville? I'm sure it pales in comparison to the Versailles but we have some "Royal Doghouses" of our own. Let them eat cake!

The photo above makes Travis look like Father Christmas!!!

Being a history buff as well as a former teacher, I never get tired of visiting all the great historic sites here in America but I always notice Americans being outnumbered by tourist from around the world. Near where I live there's a Revolutionary War site called "Smith Tavern" that I doubt 95% even know about. I'm betting that is probably more common than not in most countries.