Self, Jayhawks get front-row seats to spit show

Fribourg, Switzerland — Even Kansas University coach Bill Self had trouble describing what he saw from Swiss forward David Ramseier in the second quarter of Kansas’ 79-76 exhibition victory Tuesday. 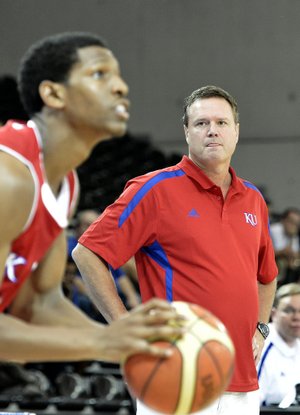 After picking up a technical foul, Ramseier went ballistic, spitting in the faces of two officials before being restrained by his coach and teammates.

“He went nuts. He went absolutely nuts. I’ve never seen that,” Self said. “I saw Bill Romanowski do it in football one time, and I saw Roberto Alomar do it in baseball one time. But this guy went and actually did it twice. He’s going after the official and did it twice.

“He’ll be back (tonight), so it’ll be interesting to see how it all plays out.”

“I’ve seen that stuff on YouTube. I thought he was definitely going to go after the ref and knock him out or something,” KU center Jeff Withey said. “It was crazy. I guess that’s how they do it around here.”

At least one positive came from the KU basketball team’s delayed flight in Washington, D.C.: KU freshman guard Andrew White was able to see with his father, Andrew Sr., and mother, Sheryl.

“My sister (Andrias) was being dropped off back at home. She lives in D.C., and I live about two hours from D.C.,” said White, whose family lives in Chester, Va. “While they were dropping my sister off, they just said they were going to try to get in the airport. They just arrived at my gate.

“I don’t know how they pulled it off, but I credit that to my dad. He’s done some crazy stuff. I just showed up, and he was at the gate.”

White said he was able to introduce his parents to his teammates.

“I was kind of tired, didn’t expect to see my family,” White said. “It was good to go down and talk. It gave me a lot of energy, so it was a good refresher.”

White, who finished with five turnovers, gave it away three times by stepping out of bounds with the basketball.

“The (three-point) arc is a whole lot wider, and every time I stepped out, I feel like it was a playmaking opportunity,” White said. “Two of them, I think, were open shots. One of them, when I was getting in the lane, I had some people open.

“Stepping out of bounds was really disappointing, and coach got on me a lot for it. But we’ll see (today). I shouldn’t have that problem (today).”

Self said a few players impressed him in short stints Tuesday.

“I thought Evan Manning was better than just about any guard we had off the bench in the limited time he had,” Self said. “I thought Travis had a good stretch. I thought Zach Peters was probably the second-best big man in the game for us behind Jeff there, and he was part of the stretch where we played well. I thought Naadir had a good stretch. But overall, we had (28) turnovers.”

28 TO's & a double spitter? Wow, that puts in a not so great perspective. Hopefully they get out of there with all their teeth. You know how we use the word "European" in the country I suppose? "You're a peein" on your cigar there Joe Bob!

I'm almost positive... that your post is the stupidest thing I've ever read.

Ramseier, Romanowski and Alomar all had one thing in common:

During the heat of "battle", someone asked them if they were a Mizzou alum.

nuleaf, you'll like this next one if they allow it to stay on here!

Wonder if we'll hear about a security breach at Dulles now. LOL

A sense of humor means you also know what's NOT funny. Lighten the mood, but my thought is, European citizens are reading these articles to see what our take is on KU's tour and you just peed all over everywhere. Have a little respect for others.