Although he had only been around him for a day, Kansas University offensive line coach Tim Grunhard on Friday gave pretty much the same scouting report as everyone else on newcomer Aslam Sterling.

During Thursday’s opening day of practice, Sterling spent most of the time watching from the sidelines.

“We had to wait until he had his physical,” Grunhard said. “We had to make sure that everything was working properly, and it is. So we’re excited about having him in the mix.”

KU’s biggest offensive lineman went through practice Friday, and Grunhard emphasized size alone would not make him a star.

“He’s gotta catch up with these guys, mentally and physically,” Grunhard said. “Because these guys have been working hard all summer.”

Asked if he had found time to bond with the three transfers from Notre Dame — quarterback Dayne Crist, tight end Mike Ragone and linebacker Anthony McDonald — Grunhard, who also played at Notre Dame, said the four had not spent as much time around each other as one might think.

“We haven’t sung the fight song together yet,” Grunhard joked. “We’ve been trying to learn (the words to KU’s alma mater) ‘The Crimson and the Blue.’”

Grunhard said Pat Lewandowski and Randall Dent, who each recently moved from the defensive line to the offensive line, had shown great energy and effort early in camp.

“Hey, these guys want to play,” Grunhard said of the two guys currently listed with the second string O-line. “I think if you asked Randall Dent or if you asked Lewandowski, ‘Hey, can you go punt the ball for us or return a kick?’ they’d say, ‘Whatever it takes to get on the field.’ Kudos to them.”

Senior receiver D.J. Beshears recently became one of 49 players named to the Paul Hornung Award watch list. The award, which annually honors college football’s most versatile athlete, is in its third year.

KU coach Charlie Weis and various members of his coaching staff will be the featured guests at a preseason barbecue on Aug. 30 outside of Memorial Stadium.

All proceeds raised by the event, which will begin at 7 p.m. and will take place on the hill near the south end zone, will go toward Weis’ Hannah & Friends foundation, which provides a positive living environment for people with special needs.

Band geek alert!! (Sorry Matt, have to point this one out) I'm a Jayhawk is the primary fight song. Crimson and the Blue is the alma mater

LOVE the coverage! Can't wait to see these guys live this year!

You are, obviously, correct. I'll fix that. Thanks!

Kick return yards isn't one of those records see someone set because it means you got plenty of chances to return kickoffs which means your defense gave up a lot of points. That number should go down significantly based on the kickoffs being moved up to the 35 alone, but I don't see this defense giving up 40+ points per game for their average either. You combine those two factors, and DJ should hopefully cut his return yardage number down to about 600 yards this season. I'd also be happy if he had 0 because I'm not a big fan of his return style. He does way too much east-west running trying to find a lane instead of running straight ahead and it costs KU field position every time. I hope Clint Bowen is working with DJ on becoming being more north-south in his return style because if he does that, I bet DJ could average at least 5 more yards per return along with actually returning a couple of kicks for TD's over the course of a season. 20 yards per return for someone with DJ's athletic ability is terrible and either he needs to learn how to return kicks or someone else needs to take his place.

You're right about one thing – the opportunities will be a lot different. More punt returns (avg under 10 yds), fewer KO returns (avg over 15 yds) as well as touchbacks.

I don't fault going for the big play all the time on a team with hardly any other way to score.

I heard this new guy is actually 360, not 340. No, I haven't seen a bigger player come through KU. It would be interesting to find out who was/is the biggest guy to come through Lawrence.

I believe Mangino pushed 4 bills if not over, but if this kid has good technique he will be a hell of an offensive linemen.

"The Gravedigger" Gilbert Brown went about 340 I believe.

final thought of the poor gunner who has to face Randall Dent returning a punt.....

Im all for it

No pics of Sterling yet? With the headline given, I expected to see at least one pic.

They had a picture of him on JayhawkSlant.

Thanks, Matt! Just his mere presence is going to tremendously help -- and provide great practice for the D-Line once KU's practices get more physical (if they aren't already). If I recall correctly, he'll be competing for our right tackle spot? Someone get this man a cheeseburger! Rock Chalk!

this is going to be a season to remember. it will entertaining if nothing else. ROCK CHALK!

here's the picture of Sterling, courtesy of JayhawkSlant 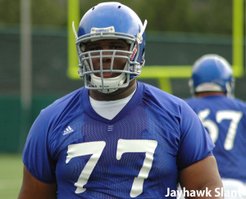 LOL we fans are totally hungry for news when we click through for a story that says "dude showed up. dude is big" (that's about it) and we're thankful for it.