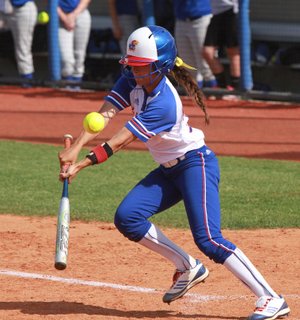 Kansas' Elsa Moyer slaps a single in the Jayhawks' first game of a doubleheader with UMKC on Wednesday, April 25, 2012, at Arrocha Ballpark.

Alicia Pille won both games — as a starter in the opener and as a reliever in the nightcap — as Kansas University softball swept a nonconference doubleheader with UMKC, 3-1 and 3-2, on Wednesday at Arroch Ballpark.

In Game One, Pille allowed one earned run off five hits over the full even innings. She was staked to a 2-0 lead in the first inning by a two-run homer by fellow freshman Maddie Stein.

Maggie Hull went 3-for-3 with a home run and three RBIs.