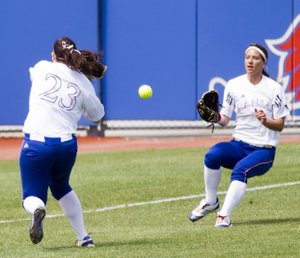 A ball drops between Mariah Montgomery (23) and Maggie Hull during their game against Iowa State Saturday, April 21, 2012, at Arrocha Ballpark.

Stein hit the first two home runs of her college career to help KU to an 8-3 lead by the fourth inning, but Iowa State scored seven runs in the last two innings to win by one.

A single, an error and a walk loaded the bases in the top of the fifth inning for Iowa State’s Erica Miller, who hit a two-run double to cut the Jayhawk lead to three, 8-5. Freshman pitcher Alicia Pille entered the game and gave up back-to-back singles, cutting the lead to one, 8-7.

Pille took the loss after entering the game in a save situation with Kansas ahead 8-5 in the fifth inning.