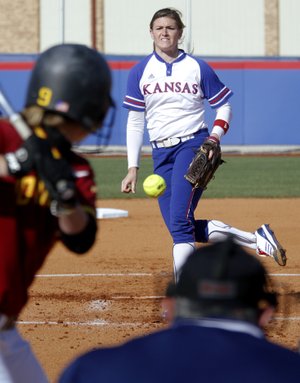 Kansas University used a bizarre seven-run sixth inning and another solid outing by Alicia Pille to beat Iowa State, 8-2, in the opening game of a three-game Big 12 softball series with Iowa State on Friday at Arrocha Ballpark.

KU led, 2-1, heading into the bottom of the sixth.

The Jayhawks (27-15 overall, 4-12 Big 12) benefited from a substitution error on a double-play call, giving Maddie Stein another opportunity at the plate. She delivered an RBI single to score one of four runs KU plated after the ruling on the field.

Pille (14-8) became the first KU freshman to win 14 since Kassie Humphreys in 2004. She allowed both earned runs off six hits over seven full innings, with three strikeouts and five walks.