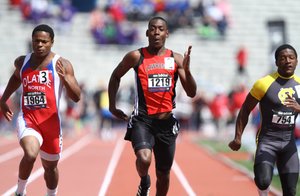 Former Kansas University All-American Scott Russell — who has decided to retire from track and field this summer after what he hopes will be his second appearance in the Olympic Games — opted for nostalgia Friday at his final Kansas Relays.

“The last time was 1999 at the NCAAs,” said the 33-year-old Russell, who won his ninth Relays javelin title with a heave of 264 feet, 5 inches. KU sophomore Johann Swanepoel was second in 244-5.

“I figured if I was going to end it at the Kansas Relays, I might as well do it in the pink and blues,” he added.

KU track switched from pink and blue to crimson and blue in 2000 and has worn those colors since.

“I still can’t believe they haven’t made them,” he said of adidas. “With Baylor wearing neon green now, maybe they’ll see a picture and think of the history and culture behind the pink and blues. There’s a lot of guys that would love to see it. Maybe some of the throwers will throw in a good word. I know a lot of the alumni think it’s kind of cool with the history of them — Al Oerter, Wes Santee, Jim Ryun — the names that have worn it. It’s something I’m pretty proud of where I’m at. I’m proud of wearing pink shorts.”

Russell, who was born and raised in Windsor, Ontario, and placed 10th in the 2008 Olympics for his native Canada, currently teaches at Basehor-Linwood Middle School. He wore B-L’s colors in the form of a purple and white hat Friday.

Turns out it was a ‘violet’ hat in honor of his young daughter, Violet. He wore a black Canadian national team T-shirt as well.

“There’s no pressure, none,” Russell said of qualifying for the 2012 Olympics. He threw an Olympic B standard distance Friday, thus needs just one more B toss in coming months to qualify for the Games.

“I wish I had time to be here when the KU throwers are throwing, an opportunity to give insight to the younger generation of kids, let them experience what this is supposed to be about.

“It’s all about the pressure, pressure, pressure. They don’t realize at some point you have to love what you are doing and enjoy it for what it is. I got caught up in that when I was a young professional: ‘I’m a professional; it’s about money. It’s about this and that.’ I never embraced doing the sport because I loved the sport. When I realized that it didn’t matter anymore, that I’m doing it because I love it, it’s when I had my best performances the last couple years.

“Hopefully things will continue. I’m 33. I’ve beaten myself up a lot of years training (18 years). I’ve got a team of people that I’m thankful to work with,” he added of coaches, chiropractors, doctors, massage therapists as well as a wife who understands the demands of track and field. “It’s amazing what you can do when you have so much support.”

Question is, why do you read this site?

You mention the shorts, which is the basis of the story and no photo...bravo!!! Oh well, I guess this just means that I join a long list of other bloggers that have now let their frustration out on this site.

By the way, what is the history and tradition behind the pink shorts? Would like to hear the story from anyone who knows it - thanks!

I honestly don't know the exact history, but we've always worn them. They have always looked like more of a faded red than a pink and they have always popped in a crowd,Iike what Scott says about the Baylor ones. The recent change was obviously to stardardize to the university branding.

Goes back to 1951 and a 60 yd race where Kansas sprinter Jack Greenwood thought he won the close race but was officially placed as 3rd. Those days the judges used their own vision instead of a photograph or other electronic optics to judge the finish.

Bill Easton claimed having Greenwood in an outside lane and wearing a common blue w/ crimson trim uniform made him harder to view. Shortly after that Easton ordered the bright pink shorts so his competitors would be easily seen.

I apologize that my comment has nothing to do with this article - but, hey KU football is finally getting some national attention - everyone seen this article on Yahoo yet ??

Team so bad it has to practice celebrating New coach Charlie Weis knew he had his work cut out at Kansas, but he couldn't have imagined this.

Hopefully our guys will use this as motivation.....

When I was at KU, a buddy of mine who was on the track team, gave me an old pair of his pink/blue shoes. I wore them (without socks) for work (delivering furniture for old Thompson Furniture on Mass St.), running, biking, fishing...for several years. Then they began to smell a bit, so I left em out in the rain to give em a good soaking, then left em out in the sun to dry. That really helped. Anyway, I think I just figured out why i never had a girlfriend. Good to know it wasn't because I was a drunken fool. It's gotta be the shoes!