Kansas University’s 14th appearance in the men’s basketball NCAA Final Four cost the city nearly $180,000 in expenses to oversee the downtown parties that ensued — and no one at Lawrence City Hall minds a bit.

“There were costs for sure, but there was a tremendous benefit for the community,” City Manager David Corliss said. “There is no question in my mind that the community reaps a benefit that is multiple times larger than what it costs us.”

The city is expecting tax revenues from sales made at restaurants, bars, grocery stores, T-shirt shops and elsewhere to more than offset those expenses, but such tax revenue reports from the state won’t be available for another month or more. But in 2008, when the Jayhawks won the National Championship, City Hall had a good tax collection year. The city’s drink tax revenues in 2008 jumped by $270,000 for the year. The city’s sales tax collections increased by nearly $782,000, although it is impossible to know how much of that is directly related to Final Four-fueled spending.

Four city departments — Police, Fire and Medical, Parks and Recreation and Public Works — incurred the bulk of expenses related to public safety and clean-up of the three large gatherings that occurred downtown following KU’s Elite Eight victory and its two games in the Final Four.

Corliss said the various duties of managing the large crowds were a significant undertaking for many city employees.

“I very much appreciate their extra hours of work,” Corliss said. “While some may not particularly look forward to the after-hours work, they did it with smiles on their faces because they recognized it was a good time for Lawrence.”

Here’s a look at several expenses:

• Personnel costs: $147,772 in additional wages. Of that, $111,218 was paid to police officers who worked additional shifts. Fire and Medical employees received $25,782, although about $12,000 of that will be reimbursed by Kansas University to compensate the city for staffing the watch parties at Allen Fieldhouse. Parks and Recreation wages totaled an extra $5,874, while Public Works checked in at $4,898.

• Additional landfill charges to get rid of all the trash from the downtown parties: $1,105.

Doesn't seem like that much when you break it down...and KU shouldn't have to pay back a dollar, let alone twelve thousand of 'em.

Worth every penny! ...... Better start budgeting for next year! RCJH!

I guess they are padding their numbers:

I look at Vehicle Costs such as Fuel: $5,515. If those are business/police cars you are talking about $.50/mile. I'm guessing if Buses are involved then you might double that, but really, somewhere between 5,000 and 10,000 miles were driven in direct relation to the final four?

I guess I don't understand why Parks and Recreation generate additional expenses, did they do something to the parks that they didn't do usually (mow the lawn, I'd say trash, but that is a different number).

Finally, police officers receiving an additional $111k. Let's do some math here. An average police officer makes $33,000 in Lawrence, KS, which is about 15.86/hour. Rounding up to $16 and paying time and half, to reach $24/hour. That would mean approximately 4625 additional hours were generated. Working 10 additional Tournament days that would mean 462 additional hours per day. 8 hours per day means that youare paying approximately 57 officers per day in overtime for 10 days.

I would be very surprised if there were 57 officers working on any day in lawrence, but I do think that the numbers here don't make any sense. 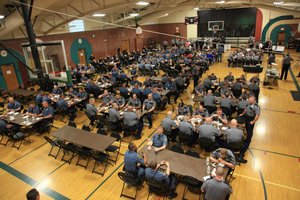 I guess if you say it was for 2 days for just the final four weekend that would be 57*4 gets you pretty close to the 200 sitting in the room.

I work for a private organization that often pays overtime to its security guards for special events and one of the costs that we include in the accounting of those costs are the fringe benefits that the guards accrue due to the additional hours.

By focusing solely on the earned wages side, you're ignoring other expenses that organizations need to account for to remain GAAP compliant.

Let me just say that, based on my experience, for the number of police officers involved and the size of the celebration, a 100K+ in charges is extremely reasonable.

My corporation incurs comparable expenses because, like the Lawrence city officials said, these events are net revenue generators.

Finally, can one put a price on allowing tens of thousands of Kansas fans to celebrate safely in an uncontrolled environment (by which I mean there were no entrance restrictions) without any major incidents?

I believe that they would need to be compliant with GAGAS and the corresponding SASs in a Government institution.

As mentioned, my calculations actually validated that 200 additional officers were needed, I guess I'm more surprised that there were 200 officers present.

I'm actually surprised they would get fringe benefits for moonlighting their services.

I'm betting there were maybe a hundred, if that. What a crock. Government accounting and spending has gone nuts in this country.

Was this bill submitted to the GSA?

LOL @ somebody who doesn't know how to account for expenses according to generally accepted accounting principles.

I'm surprised you are making fun of someone who is making some type of estimate based on some reasonable math. However, you appear to cite GAAP as the method that a Government agency would use in their accounting practices. I'd ask who should be laughed at more?

20/ hour is more like a regular hourly rate for officers.... OT would then be in the neighborhood of 30 to 40/hour... Maybe more depending on tenure and rank.

The cost for this weekend was probably still higher than those of Lexington Kentucky.

A burning couch, what the couch probably cost $200.

A burning car, in KY, probably $1000, unless it was made for bootlegging or meth deliveries.

Oh there was the guy who lost his foot in a shooting, so that might put their cost higher due to surgery bills, since he did go to a hospital and not the back yard picnic table and the use of a rusty hack saw.

Oh well all of it was worth it. What a ride, oh what a sweet sweet ride.

Sounds like a lot of $, and as pointed out above, it seems a stretch. But as government budgets go now-a-days, that amount's only a drop in the bucket. Just consider it money spent in public relations. It could be categorized as advertising for tourism (Home of the University of Kansas - Jayhawks, and Allen Field House. And home of the soon to be displayed "original basketball rules.") Or to show the nation Lawrence/KU does things in a peaceable manner, unlike their counterpart in Kenstinky. Do wonder how much Lexington spent, if anything, to control their public rioting/celebrating?

From the amount above one also has to realize how much the security alone costs when a president takes a trip to any city, anywhere in the US, or especially to another country. When Obama was here in Honolulu last year for that 3 day Pacific conference whatzamajigy, numerous streets were blocked off and policemen were located all around the areas he went to. And that didn't include all the Secret Service protection in his entourage.

The extra cop cost was worthless. My bud and I were threatened with a gun from a bunch of punks after the NC game. I was suckered punched to the ground and they broke my friends arm. A dozen cops show up but they can't competently apprehend this group of punk asses.

So add the cost of out of pocket surgery. Thanks Lawrence and PD.

No the surgery will not be done in the town of Larry so. It will incur a very expensive out of pocket service rate that should have been a restitution charge for the two pieces of trash that did this that Lawrence PD did not pursue properly.

"In the future, everything will become too expensive to allow anything to happen and humanity will be priced out of existence. --jaybate

That time is now. I'm going to go home and sit in the dark. Wait, my wife says that is why credit cards were invented. Never mind. Party!

First there was chattel slavery.

Then there was wage slavery.

Now there is interest slavery.

And it is real and legal and reduces a people to servitude not for themselves, but for their masters, just as chattel slavery was and did.

There is no greater freedom in contemporary society than to be debt free, or to operate on borrowed money that you never have to repay.

Perhaps the most important secret to all great private oligarchic wealth perpetuation is operating with debt that must never be repaid, while at the same time lending to those that have to repay. It is a straddle only feasible with private ownership of central bank with the reserve currency secured by public taxation. It has the highest short and long term probability of solvency, minimum yield and profit maximization yet developed by private oligarchy. What perpetuates the private oligarchy is that it tightly controls the means of unleashing IRS judicial force and military force on debtors to coerce debt service collection and impose taking of desirable collateral.

Or so a wise business man once made clear to me.

I mean, looking at the photos, it appeared so crowded that the bike guys would have had to be walking.

Still no overturned cars, shattered storefront windows, fires, looting, murders or mayhem and everybody left with both their feet attached.

I guess Lawrence, Kansas just doesn't know how to party!!! :)