Monday, the Jayhawks again began to look to the future when Kellen Ash, a 6-foot-3, 194-pound linebacker from Parkway South High in Ballwin, Mo., outside of St. Louis, orally committed to Kansas.

As a junior, Ash finished with 87 tackles, including 20 for loss, and was named all-conference, all-metro and all-state. 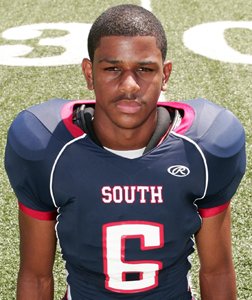 KU linebackers coach DeMontie Cross played a big role in landing Ash, who also drew interest from Ball State, Cincinnati, Illinois, Kansas State and Missouri. Head coach Charlie Weis and defensive coordinator Dave Campo helped seal the deal a couple of weeks ago when Ash and his family made an unofficial visit. Ash told Jon Kirby of JayhawkSlant.com that the early attention he received from KU made the Jayhawks the favorite from the beginning.

“They were the first to offer so I paid a lot of attention to them,” Ash told Kirby. “I like how they take care of their players. I feel like they can help me improve. I feel like all my hard work has paid off. I’m not going to slow down now. I have to keep getting better for the next level.”

Bring em on! This year I just want to be competative no more 40 point blowouts. I just want to see progress plain and simple. Respect thats all i am asking for year 1 and 2...year 3 a bowl game.

Agreed... 5 wins is a very reasonable expectation. We have 3 "gimmes" with the non-conference opponents we have and I think it is safe to say we should be able to improve enough to win 2-3 games in conference.

Nice. Good to see us getting a kid from the STL area.

Meh...Until he finishes this season, red shirts, shirts his freshman year, plays special teams and a little junk time as a sophomore, all along eating and lifting until he is a 6'3" 235lb monster his junior year.

Wait, how many red-shirts are you giving this kid?

Rivals says this kid had 37 TFL and 19 sacks last year. Man, I hope rivals is right.

Those are terrific numbers for a pretty ordinary size high school linebacker. Makes me think he must have some smarts to know where to be and some speed to take him there. His picture shows there is plenty of room for size and strength to make quantum jumps each of the next four or five years.

High school stats are misleading... Was he playing teams like Rockhurst or Missouri School for the Visually Impaired?

Either way 19 sacks would be amazing!

Good news on the recruting front is always welcomed. Congratulations to Weis and the rest of the coaching staff.

I trust coach, who knows what he will play but I bet this kid will play.

Wha', those shiny new tiger uni's didn't sway him to the SEC? Nice addition. Spring game on the 28th. That's also a good time to trial run your tailgating for the fall.

Sounds like he could end up a safety for us. Undersized for a linebacker and I can't see him bulking up enough for a big 12 linebacker.

Exactly what I was thinking. It sounds like he might Be pretty speedy, so I think that looks like a great frame for safety if he can deliver a hit.