Living the life: Ex-KU players — some pursuing dreams of their own — help at Self fantasy camp

In back, From left, Kansas coaches Bill Self, Norm Roberts and Joe Dooley watch as players scramble for a loose ball during a scrimmage on the first day of the Bill Self Basketball Experience fantasy camp, Thursday, April 12, 2012, at Allen Fieldhouse.

Brady Morningstar would classify his first year in professional basketball as a resounding success.

“It was wonderful. I really enjoyed it,” said Morningstar, a 6-foot-4 former Kansas University guard, who averaged 9.6 points a game for the (23-27) Tulsa 66ers, whose NBA Development League season concluded on Saturday. 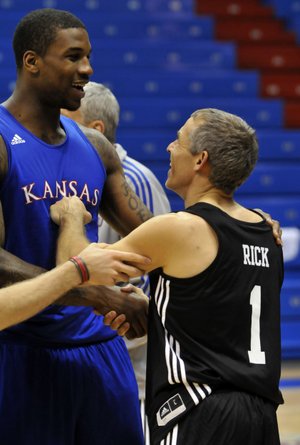 “It’s all about improving as a player there, not really winning games is what they were telling us. I improved there, and I’m ready for next year,” added Morningstar, whose squad did not advance to the playoffs.

Morningstar competed in a Bill Self Basketball Experience fantasy camp game as a teammate of Tyshawn Taylor, Conner Teahan and Wayne Simien (as well as campers between 35-60 years old) and opponent of Thomas Robinson, Jordan Juenemann and Billy Thomas on Thursday night in Allen Fieldhouse. Morningstar’s team fell, 56-49.

“Toward the first of the year I played a whole bunch, then we got some guys back from (NBA) training camp. As a rookie unless you are averaging 30 (points) a game, you’ve got to give way to older guys like I did here at Kansas,” said Morningstar, who started 20 of 50 games for the 66ers, good for 27.7 minutes a game.

“I don’t know if I’m on track for the NBA. I think I’m on track to keep playing ball the way I like to play ball,” Morningstar said. “I’m not setting my NBA sights too high. I’m giving myself a chance. A lot of guys are trying to do what I do, so I’m not going to say I’m going to make it and nobody else will.

“There were a record number of call-ups this year — 50 they said (from NBADL rosters),” the former Free State High standout added. “Unfortunately I wasn’t one of them. A couple of my teammates were, but that’s why you have next year and the year after that and year after that ... to prove yourself.”

“Wayne had a couple threes that just didn’t go down. Teahan didn’t guard the way he needed to. I’ve got to be honest ... Brady Morningstar was playing that NBA defense — none,” Roberts said with a laugh. “It really hurt us.”

Morningstar said the campers, who paid $4,995 ($2,995 for Williams Fund members) for a weekend of basketball in Lawrence, were certain to have a great time.

“I think it’s great for them to see how spoiled we are for a couple days and see how we do things around Kansas basketball,” Morningstar said.

Of the camp, which continues with a batch of games today and Saturday, Roberts said: “I think it’s great. The only thing we worry about is we don’t need any of the older guys taking charges on Thomas Robinson at halfcourt. You have to be careful with that. I think it’s a great deal. You will have some guys be very, very competitive and other guys just want to have a good time.”

Roberts, who worked on Self’s first KU staff, then went to St. John’s as head coach for six years and took a year off before working as an assistant at Florida this past season, said he’s received a warm welcome back at KU.

“I’ve seen people I’d not seen in a while. Everybody’s been real nice,” said Roberts, on the job since Wednesday.

“We’ll be out not this weekend but next weekend. We get to evaluate again in April. It’s great they brought the (April evaluation) period back,” Roberts said of the NCAA. “You can get out and see players.”

Tourney in Olathe this year: The Jayhawk Invitational will be held April 27-29 in Olathe, Shawnee and Gardner this year. It had been held in Lawrence the past 11 years.

“Thanks to tremendous support and growth the Jayhawk has experienced over the years, the tournament will move to a new home in the Kansas City South Metro area in order to stay in line with some of the changes coming to grassroots events,” read a statement on the official tourney website. “The Jayhawk will still feature the same top-notch teams, facilities and exposure. In addition to all of the great things teams have come to expect from the Jayhawk Invitational, the new location in suburban Kansas City gives much better access to the facilities, additional lodging, dining, entertainment and shopping opportunities that the city can provide.”