'Beyond the Phog' excerpt: Stephen Vinson on Moulaye Niang and the Oregon Duck 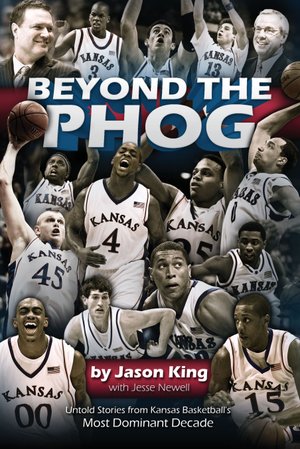 The following is an excerpt from "Beyond the Phog - Untold Stories from Kansas Basketball's Most Dominant Decade." Compiled by Jason King of Yahoo! Sports and Lawrence Journal-World sportswriter Jesse Newell, the 400-page book includes interviews with 40 players and coaches from the most successful era in Jayhawks history. "Beyond the Phog" will be available in stores Sept. 30. KUSports.com will run excerpts from the book throughout the next few weeks.

MOULAYE AND THE OREGON DUCK

One of my favorite Coach Williams stories involves Moulaye Niang.

We were playing Oregon and we were ranked No. 2 and they were No. 3 with guys like Luke Ridnour and Luke Jackson. They were very good. We were playing them in Portland so we could have a home game for Aaron and Mike. At one point, Moulaye was finally going to get his chance to play. Oregon had just gone on a little bit of a run and we were getting beat. Coach Williams called timeout. He was going to put Moulaye in the game for his first real action against a good team.

During the timeout, their mascot, the Oregon Duck, came out in one of those crazy spandex suits and was doing a dunking show. The fans were going crazy. We knew something was going on in the background because of the reaction. This guy was doing, like, three flips and dunking the ball with a big mat underneath him. All the while, Coach Williams was drawing up a play.

As the Oregon mascot was jumping off the trampoline, you could see Moulaye’s eyes following the Duck. And he was watching the mascot right as Coach Williams was telling him what play to run. So he’s telling Moulaye what he’s supposed to do on the play, and he looks up at Moulaye, and Moulaye’s eyes are following this Oregon Duck through the air.

Coach Williams literally grabbed him by the chest, pulled him out of his chair and put Michael Lee in at the power-forward position. That was the birth of Michael Lee getting to play. Mike never got to play before then.

I don’t know if you remember the game or not – we lost – but Mike had a really good game. That was his Cal game, in other words, if you wanted to equate it for something to me. That was the game that he gained more trust from Coach Williams for him to play the rest of the year and the rest of his career.

But it started with Moulaye not paying attention because he wanted to see the Oregon Duck. We would give Mike Lee a difficult time about it. He probably would have found another way to play eventually, but it was funny. You don’t put a 6-3 guy in at power forward unless you’re desperate.