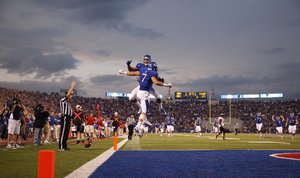 When the Yellow Jackets do pass, they rely on as difficult a receiver to defend as any on KU’s schedule, and don’t forget, Oklahoma State preseason All-American Justin Blackmon is on the schedule.

If Georgia Tech wideout Stephen Hill decides to make himself eligible for the NFL draft after this, his junior season, he could become the third Tech receiver chosen in the first round in a seven-year span, following Calvin Johnson (2007) and Demaryius Thomas (2010).

Junior quarterback Tevin Washington’s off to a strong start, but Hill’s the loudest talent on an offense that so far ranks near the top in the nation in several categories. Tech is tied for second with 56 points per game, third with 629 total yards a game, sixth with 339.5 rushing yards per game, first in passing efficiency (no interceptions, 22.3 yards per pass attempt), No. 3 in third-down conversion percentage (70.8) and tied for first in red-zone offense (10 for 10, 10 rushing touchdowns).

In last season’s 28-25 KU upset of Georgia Tech at Memorial Stadium, Hill caught a 40-yard TD pass and a two-point conversion for the game’s final eight points. Defenses must pay so much attention to the run against Tech that Hill is left to abuse single-coverage.

It will take another tidy, monster day from the Kansas offense Saturday in Atlanta to compete. As is the case with Georgia Tech, the Jayhawks run the ball to open up the pass and have a member of the passing game who ranks high in a national statistical category. That would be quarterback Jordan Webb, who is fourth in the nation in passing efficiency, three spots behind Baylor’s Robert Griffin III.

Webb, who showed the ability to scramble in Saturday’s come-from-behind, 45-42 upset victory against Northern Illinois, has completed 70 percent of his passes, averages 10.7 yards per attempt and has thrown six touchdown passes without getting intercepted.

“His scramble throws were impressive,” said KU offensive coordinator and chief Webb tutor Chuck Long. “He was not a great technician at throwing on the run (last year). He really worked hard on that in the offseason.”

The emotional edge swings from a KU team driven to show it should not have been the underdog against NIU, to Georgia Tech, a team seeking to avenge last season’s loss. Tough, tough game for KU.

You say the GT receiver did a 25 foot high jump? Without a pole? If he can also do a 300 foot long jump they should just use him for kick returns.

My article reads that it was the Long jump. That is a different field event.

BTW, I think writers should admit when they have errors, everyone has errors and it's only human.

Every game this year will be a tough test because KU is not very good.

Exactly in what way was Ga. Tech not better than last year?

One of the biggest factors in this game is playing on the road. other than the Reesing years (mostly 2007), we've struggled mightly on the road. Since this team seems to have it's "swag" going, it will be interesting to see how and if the road games affect them as much.

And the defense has forced NO turnovers in each of the first two games. Thanks for the input from Atlanta.

While you think it is safe to say that GT will open up the passing section of their playbook, we have to look at the coach and the personnel that they have, not to mention the offensive schemes they run. Their coach is a triple option guy who leans on that heavily. While they have passing plays built in, it is likely not something that they spend a lot of time on, and certainly not something that you can put into the playbook successfully in one week. I expect this to be a quick game with lots of running between the teams with passing mixed in sparingly to play off both our strengths. Should be a good test though for this team and hopefully we can bring home a win.

Man, 113th nationally in pass defense---like they said in "Waterboy, we suck!"

It will be interesting to see how our offense will fare against their defense. Also, how we do for the first time on the road. I just saw yesterday that we are a 15-point underdog. No surprise there.

When you get little to no pressure on the QB, you tend to have the 113th ranked pass defense. This game is going to be just like the game last year.....difficult. But, I like our offense's ability to keep us in the game better than the team we had last year. We have the ability to have the kryptonite of any high scoring offense. We have a time consuming offense that can keep our defense rested and their offense off the field!

It's tough to get pressure on the QB when he only has to do a 3 step drop and hit the first receiver he sees. Our D backs are going to have to get physical and play up on the receivers and rely on the safeties to play over the top (tough to do against GT though because of all the play fakes).

Exactly, no team is going to get that good of pressure if the QB can just throw a screen pass and they rack up at least 6 yards a play.. and thats what happens with our DB's 10 yards away from the line of scrimmage.

It should be safe to say that KU is by far the toughest opponent GT has faced so far this year.

Dagger, I was thinking the same thing, though their numbers so far still look pretty impressive.

Kind of a lame attempt at channeling ahperse. To say there is not any improvement implies that longtimehawk means, like, 80 years, you are blind and deaf, and those flowers are on your grave which you have one foot in.

Even ahperse will admit there has been improvement.

Or was that sarcasm. Surely I'm the fool here, right?

I hope you're joking longtimehawk. Have you watched them play yet because I've been seriously impressed with our young crop of running backs, our team speed, our O-line, our focus, special teams, etc. Our defense is awful but I think we can sneak up and upset some people with this team. Turner Gill has made a "believer" out of me.

Gotta go with mikendal and dagger to some degree.

I don't think we're stopping GTech any better that NiLL, but if you don't turn it over to them, they can really only score so many points. Probably in the forties. So if we can keep up with them offensively, (and if WCar. and MidTen, can each score 21, I think we can) it should be an interesting finish.

No reason this game can't be exactly like the Nill game, even though the offenses are different styles. We played the option well last year, and are better equipped to stop it this year, but it's an away game, so that cancels out.

Other areas of improvement:

in no particular order.

BTW do we have injury updates other than Williams?

Let's not get ahead of ourselves... The Offense has not faced a good Defense yet and it is easy to look fast vs two teams from small conferences.

Anyone who thinks that because GTech gave up 21 pts their D is not good should probably look at the facts. In the first game they were up 28-0 in the first Qtr and fumbled a punt giving W Car the ball 1st and Goal, and later up 42-14 Tech had a kick blocked and returned for a TD as the Half ended. Really their D gave up one TD.

VS Mid Ten they Tech was up 42-7 so you would assume that it was 3rd team Defense at that point.

Why Kansas will win:

1] Dominate the game, time of possession and field position with potent running attack. 2] Score early and play with a lead. 3] Ignore home crowd and focus on opponent...not playing in a dome. 4] Cut down penalties, turnovers and missed assignments. 5] Utilize the pass at most opportune moments.

Why Kansas will lose:

1] Let the home crowd rattle them. 2] Turnovers, penalties, poor tackling. 3] Lack of pressure on the quarterback 4] Be content to be respectable. 5] Try to do too much, too fast, too soon.

I feel that, yes, Kansas absolutely has a chance to win this game but we better use the first 1 thru 5, not the second 1 thru 5.

I think there are a couple of things that give me hope about this weekend.

1) We beat them last year, with many that perceive our team has improved and GT has not improved since last year. 2) GT is more of a run team than a pass team (not saying they won't throw the ball), but if they are a run first type of team, it seems like we have been somewhat decent against the run (which has surprised me). 3) We are due for a turnover or two this game. 4) Hopefully, it will allow us to go over after the quarterback since they run more of an option.

5) We are in the Big XII...wait are we still...I get confused...nevermind that would matter for the game.

Why KU will win:

I agree but think it could come from the different direction, that is that they have been trying to run the ball predominantly, but for turnovers have fallen behind and now in the late third period are starting to air it out. Can we withstand the late surge??? I think we can and will. So, the question seems be if we force a team to be a one-dimensional offense, that being the passing attack, can we still slow them down enough to win? I think so. What I hope that we do is force them to make a large number of passes. Short passes. Make them execute and my guess is that will lead to a pick or two. If we can make them make 30or 40 short passes I believe this will be in our favor. Play it the way we played McNeese State only better with wrinkles. Take some risk and if we get into a scoring contest one turnover is a 14 point edge.

I agree. Run first, worry about their response after we are up a couple of scores.

Yes, I forgot to mention Webb. He looks like an All Big XII quarterback out there, scrambling, making plays down field. He is only a red-shirt Sophomore but he out dueled a Senior quarterback with some weapons that is a projected mid-round draft pick.

This game is so pivotal in the rebuilding of this program. If KU can steal this game in Atlanta, it will be another fantastic recruiting foothold for the off-season.