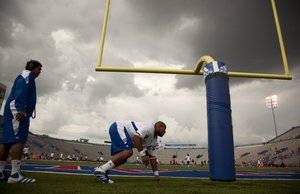 KU receiver D.J. Beshears said he wasn't worried that his final TD would be overturned

The last thing Northern Illinois wanted to do was give red-hot Kansas University quarterback Jordan Webb time to throw the football.

Not on a fourth-and-goal call from the six-yard line with 14 seconds to play and the Huskies leading, 42-38, Saturday night at KU’s Memorial Stadium.

“We had a blitz called,” Huskies coach Dave Doeren said of all-out pursuit of Webb, who calmly fired a bullet pass to D.J. Beshears for a game-winning touchdown strike with :09 remaining in KU’s 45-42 victory.

“I knew it was a make-or-break play. We just didn’t want the guy to stand back there and have time to run around, which he’d been doing on some downs. The kid did a great job of staying alive. We tried to bring some pressure right up the middle. They picked it up. When the ball was thrown, we had tight coverage. The guy made a good catch.”

Doeren, a former KU assistant coach, was peppered with questions about Webb’s last completion on a night the KU sophomore hit 21 of 30 passes for 281 yards and three touchdowns.

“We tried to be aggressive with the last call to get a pass rush,” Doeren said. “They did a better job of picking it up than we did rushing. I thought we had a chance of sacking him with it. Obviously, coach Niemann (Jay, defensive coordinator) did, or we wouldn’t have called it. Obviously, you don’t call a play for it not to work. Obviously those guys did a nice job of protecting him.”

NIU after the ensuing kickoff was left with just one play to answer KU’s late TD strike up the middle. Senior Chandler Harnish’s deep bomb fell incomplete on a first-and-10 call from the NIU 31.

“It kills you,” Harnish said of not having time to work with, “because you know the way we were playing all night we were going to go right down the field, and we were going to get a chance to kick a field goal or score a touchdown for the win.

We were very confident. It hurts to not have that opportunity,” added Harnish, who hit 27 of 33 passes for 315 yards and two TDs and rushed for 89 yards off 11 carries and scored three TDs.

“The way our offense was rolling, I had all the confidence in the world we’d put up points. You never expect your defense to give up 45 points in a game. It was a shoot-out kind of game. The defense was playing their butts off. They (Jayhawks) had the ball 36 minutes (to NIU’s 23). It’s hard for them (NIU defenders) to stay fresh.”

NIU players and coaches were told after the game about former Northern Illinois head coach Jerry Kill, who suffered a violent seizure at the end of Minnesota’s 28-21 home loss to New Mexico State. Kill, who was head coach at Northern Illinois last year and is in his first coach at Minnesota, was listed in stable condition at a hospital after being transported there by ambulance. He was to undergo further tests Saturday night as a precaution.

“I just found out in the locker room. We just wish him and his family the very best,” Doeren said. “He’s very near and dear to this program. We’ll be praying for him.”

“I heard after the game. It’s good to hear he’s OK from the situation he just went through,” said defensive back Demetrius Stone. “It’s always scary to hear about something like that. It’s a blessing for him to be OK.”

Northern Illinois (1-1) will meet Wisconsin at 2:30 p.m. Saturday at Soldier Field in Chicago.

Give me a break. This is starting to look like ksufans.com with all the gloating about beating such a ridiculously inferior team.

A win against a team like NIU should be a footnote in the season, nothing more. Get over it, move on, and pay attention to what actually matters.

Man you are miserable! Please go back to whatever you were doing before you started poisoning this board a month ago. You are clearly not a fan.

If you WERE a KU fan you would know that this program struggled in every possible way last year at this time, and have improved by leaps and bounds. You would know that almost no one even picked them to beat this supposedly "inferior" team, and this is not really an "inferior" team. You would know how incredibly young this team is, and that they have tremendous upside, yet they are going to make mistakes like all young teams do. If you were an actual fan you would be excited about the upside, and the possibility of what might happen when these young guys gain more experience and confidence. You would focus on criticizing the areas that clearly still need improvement (The defense, special teams, etc.), instead of dismissing the program and their fans in broad strokes.

Please either post reasonable arguments or do us all a favor and crawl back under your PAC rock.

atl, this is just is just another burst of negative blather from the banned account poster formerly known as KSA 21-3503. You know, the Kansas statutory refererence to indecent liberties with a child.

Really, what else would you expect?

NP-hopefully everyone else recognizes "it" as well.

NIU was anywhere from a 5.5 to 7 points favorite in last evening's game.

Each game actually matters to a squad that is supposed to go 1-11. Each game matters to the fan base who support the Hawks. It is called building a program and getting better. NIU was 11-1 last year. NIU was supposed to win this game. How do you justify calling them a ridiculously inferior team?

Ignore folks who don't appreciate a win against a good team.

Where did you find the extra win and hide the other two losses?

A 10-3 season was good enough without manufacturing embellishments.

NIU had a good year in a middling conference.

NIU was 11-3 last year, with a Bowl win over Fresno State. They DOMINATED the MAC last year, winning by an average of 31 ppg in their 8 conf wins. They have a great QB who has a decent shot of playing in the League next year.

This was a GREAT win over a really good team!

Great win over a good team

Fun with adjectives and verbs - from ESPN's story of the game: "JaCory Shepherd's 20-yard reception on third-and-10 a few minutes later kept Kansas' drive alive and Darrian Miller, one of several F L E E T freshmen who have E N L I V E N E D what used to be a P O N D E R O U S offense, made it 21-14 with an 18-yard dash around right end."

This was another big win. A confidence booster. The defense needs a lot of work but at least there is reason to hope. NIU will win a lot of FB games this year. This is a win to be proud of. I, for one, am proud as hell for this band of Jayhawks. Looks like GT is going to have its hands full this weekend. Go Hawks. You are starting to excite the fan base.

This was outstanding execution. The third down conversion rate was phenomenal, 2 for 2 on critical fourth downs, ball security (except for one fluke fumble), only one punt but it was a good one. That they led us in turnover margin, seemed to score at will, that we got down by two tds, that the refs called holding on us four times negating two long td runs, and we still won is amazing. What a way to keep the fans in their seats, Coach! It is a good thing Coach Kill wasn't at this game.

KU overcame a lot in this game. A 14 point first half deficit. Two TDs called back by holding penalties, a fumble. The only good break was the NIU catch at the 1-yard line that was overturned by replay review. The guys showed a lot of grit in their comeback to win.

Definitely a huge step forward for these guys. The offense will be something for all teams to contend with, but we do have some gaping holes in our defense, which our opponents will exploit. Defense problems seem to be more programmatic than athleticism...we made good tackles, and have good speed, just our guys were never in the right place. We do need to get more pressure on the QBs...that's the first step. Terrific poise by Webb today, and some seriously wicked power by Sims also.

I thought Harnish was a lot cocky but he can back it up because he is good---NFL good. I just thought the whole Northern Illinois team was whooping it up when they went ahead by two TDs. It's okay to be confident but to celebrate like they had already put the game away in the second quarter? I just thought that could come back and haunt them---and, it did. It was a great win for KU. I wish I was there. I have a friend that went to the game and she said it was a great crowd atmosphere---that obviously helped the Jayhawks.