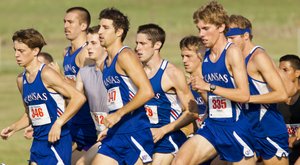 Zarda was sure to give them instructions.

“Make sure you get the ‘G,’” he jokingly told the cameraman, of the logo on his bottle of Gatorade.

It was that good of a day for the Kansas men’s cross country team. KU won the men’s 6K event with six runners in the top 12, led by Zarda’s first-place finish.

It was the seventh straight year the men won the Timmons event.

From the beginning of the race, Kansas had a pack of runners leading the field and sustained it for the first couple of miles. By then, the runners had enough of a presence in front for an easy victory, winning the meet by 26 points.

For Zarda, the race verified that he was in the shape he had wanted. For the team, it showed that the young runners were good enough to win a meet without a majority of the top runners competing.

Assistant coach Michael Whittlesey said the men’s team got the outcome it wanted.

“We wanted to sit back and put the victory in the hands of the younger guys,” Whittlesey said.

Saturday was a great example of running as a team, Zarda said. Being the individual race winner was a great feeling, too.

“Hopefully this is not the last one,” Zarda said.

The same joy was not present on the women’s side.

The KU women finished second overall in the 5K, losing to Oral Roberts, which had the top three runners.

Four Kansas runners finished in the top 10. Junior Allie Marquis led the Jayhawks with a fourth-place finish, but admitted it was not the best race. Oral Roberts started faster than Kansas expected.

“I think that mentally, that kind of struck us because we weren’t thinking that this is going to be one of those races,” Marquis said. “We thought we were going to take it right away.”

It was only the first meet of the season, and Marquis said she used it get back her confidence that she lost in track. Whittlesey said he saw the confidence of the runners diminish when they didn’t respond to Oral Roberts taking off in the middle of the race.

Finishing fourth was a bit of a confidence booster for Marquis, but the second-place team finish was not the result the runners and coaches wanted.

“We have a long way to go,” Marquis said.