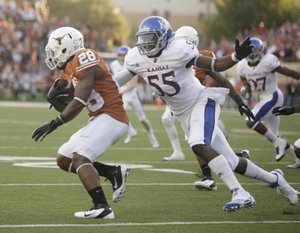 • Another sorry trip to Austin

“I thought he tackled well tonight, and I thought he showed some toughness,” KU defensive coordinator Vic Shealy said. “I definitely think there are some areas he’s improved.”

But it wasn’t just the six solo tackles and nine assists that made Terry stand out. It was his resolve.

“He got a little bit dinged there,” Shealy said. “But to the kid’s credit, if he was looking for a way out, he could’ve (checked out there), but he came back in a series or two later and, to me, he wanted to play tonight. For a young kid to not do that, that’s improvement in itself.”

KU senior Steven Johnson led the Jayhawks with 18 tackles. It marked a career-high for Johnson and was the most by a Jayhawk since 2005.

Linebacker Isaac Wright, who played more tonight than he had all season, finished with a career-high 12 tackles. Fellow junior Tunde Bakare also recorded a career-high 11 tackles.

Despite becoming used to being on the wrong end of such lopsided blowouts, the KU coaching staff doesn’t believe its players have quit.

“I’m not ready to say our kids didn’t battle,” Shealy said. “I think they did do that. Maybe we didn’t make enough plays, at times, to limit the number of points on the board. They’re disappointed, but they have not given in.”

Junior safety Bradley McDougald credits the coaches for that.

“They’re doing a great job of keeping us together,” he said. “I know guys on the offensive side and defensive side are just going to try to keep getting better. That’s the only thing we can do. We’re having a bad stretch, but teams do, universities do, we just have to work through it.”

For the second week in a row, the Jayhawks won Saturday’s opening coin toss. However, for the first time all season, KU deferred its choice to the second half instead of electing to receive the opening kick. ... Red-shirt freshman tight end Trent Smiley recorded the first reception of his career in the fourth quarter. ... Junior linebacker/defensive end Toben Opurum’s sack in the third quarter was his third of the season. ... Junior cornerback Greg Brown’s interception in the end zone in the second quarter was his first of the season and the second of his career. ... Sophomore defensive tackle Shane Smith made the first start of his career.

QUIT- verb (used with object)quitquittedquitting 1. to stop 2. to give up or leave

What part of the above definition does the coaching staff and players not understand? Their actions on the field clearly reflect quitting.

In fairness to two or three guys I probably should have stated nearly everyone has quit. Stephen Johnson Is still playing. Wish we had more kids with his heart.

I hate the comments, if we had "heart", it sounds so stupid.

If we had a coach that could actually teach talent, we might be in some games.

If I was a KU player I would start telling everyone who would listen that I did in fact QUIT and did so after the second game of the season... That is the only acceptable excuse for how they have played the rest of the season.

If the coaching staff and the players don't see the team quitting, on what basis does anyone else have to make such an accusation?

Are the players discouraged and frustrated? Of course. They're competitors. They desperately want to win. They care deeply, and that's why I'm sure it hurts deeply to lose week after week. I certainly don't think the issue is lack of heart.

I hope that either SZ is negotiating the buyout of Turner Gill. I'm assuming that he can get it below the $6 million that is owed him.

I hope at least that SZ has decided to fire someone on the defensive side of the ball and is ready to make some sort of change.

With the problems the offense is having, I believe that it would be appropriate to actually have someone on that side fired as well. Since TG is responsble for both, he should be the one that should exit.

He clearly can't coach and he is getting more and more predictable on the offense and defense. Turner Gill do us all a favor and go back to MAC where you were 20-30. At least there you would have a record someone would appreciate. 3-9 followed by 2-7 (so far) isn't bad...it's horrible. And let's be honest one of those wins was against a D2 team and the other was a lucky last second win against a .500 team.

Why would he be able to get it below $6 million? If it were you, and you had a guaranteed $6 million, wouldn't you expect the whole amount? Getting a new coach is going to cost us a ton of money. At this point, I don't see how there is any other option. This team SUCKS!!!

You can always negotiate.

Accepting a resignation rather than being fired would be one example.

You should only have to pay 100% of the remaining contract value if TG doesn't want to coach anywhere else for the next 3 years.

They didn't quit - it just pitted our 2-star Texas leftovers against their 5-star Texas brethren. The outcome was pre-ordained.

our coaches are pathetic!

Having watched the KU football for 50 years, I have to say that we continue to redefine the pathetic nature of our football program. In fact that mediocrity, has slipped down into all of our sports. How long will we simply accept the fact that one of the greatest universities in the country simply cannot get it done. Our psyche has been damaged, and soon that damage will be irreparable. Clearly, if things don't change the cancer will eventually reach our sacred basketball program. Bill Self has said he does not want to coach at a non-BCS university.

One of the reasons Nebraska got into the Big 10 was the overall excellence of its athletic department. We should strive, honestly strive for that kind of excellence, with our academic quality, we would then be prime candidates for any conference. Right now, we must all pray that the Big 12 does not fall apart, or that by some miracle before it does, we get the spine and backbone to be something more than the league doormat.

I bleed crimson and blue. Unfortunately, now I am just bleeding.

I like Turner Gill. I want him to succeed. We hear that his players like him. If they do, they must genuinely play hard and play smart. If they do not, before the end of the year show real resolve, then I think there is no other alternative, but to try, try again.

When you are the worst defense in the country, and in the Texas game nearly the worst offense, how can anyone say that progress is being made, or that a change would make us worse? How can you be worse than the worst?

Keeston Terry would be better at the WR position. He was burned bad in the KSU game. I am glad to see him come back with a good game against the Longhorns. But, honestly, he would be better on the other side of the ball. Definitely, could help us there.

I think the entire team should spend a few weeks next summer at Bill Snyder's football camp. Perhaps then they might really show some "improvement".

Ya and they might just get some real coaching!!!

The KU football program was in shambles the year prior to Gill taking over. Gill only has one class he recruited playing and they are largely Freshmen. Gill deserves at least one more year to see if his recruiting will begin to bear fruit on the field. It is all about recruiting and I think Gill can recruit. As I recall, when Bob stoops took over the OU program, he had to endure a couple of frustrating years. KU will never improve if we fire a coach every two to four years.

On average, fire or replace a coach every two to four years is exactly what we've been doing for the last 40 plus years.

Not questioning the effort, but let's be honest here. It's easy for guys to have 18 and 15 tackles when your defense is on the field for 45 minutes.

Not suggesting the outcome would be different, but this one is totally on the offense. There were some games this year that the defense would have given up 70 or 80 if they had been on the field that long.

Matt did BEast just invite Houston and SMU, nice move on their part.