College Station, Texas — Missouri quarterback James Franklin had the worst game of his short career last week, with four turnovers in the second half a loss to No. 3 Oklahoma State. 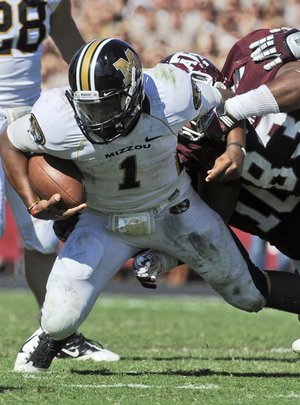 He made up for it on Saturday, throwing two touchdown passes, including the game-winner in overtime, and running for two more scores to lead the Tigers to a 38-31 win over No. 16 Texas A&M.

The winning score came on an 11-yard throw to Marcus Lucas.

Franklin didn't feel like had a great day passing, but he made a perfect throw when it counted most.

"We definitely wanted to run the ball, (but) once we had to get some yardage we went to the pass," Franklin said of the winning score. "We were getting the one-on-one coverage and it worked out."

Texas A&M got the ball after the score, but Ryan Tannehill's pass on fourth down was deflected.

"There was nothing easy about it," Missouri coach Gary Pinkel said of the win. "These kind of games you just have to fight and fight. A lot of players did a lot of good things in critical situations and I'm very proud of them."

The Tigers had a chance to win it in regulation, but a 46-yard field goal attempt sailed wide right as time expired.

Missouri (4-4, 2-3 Big 12) got the ball when Jacquies Smith caused a fumble by Tannehill, which was recovered by Dominique Hamilton.

It was the fifth 100-yard game for Josey and his second in a row.

Missouri has won two straight over the Aggies and unlike the rest of the Big 12 schools, the Tigers could face them again next year. Missouri is expected to soon join Texas A&M in a move to the Southeastern Conference.

Missouri took its first lead of the second half on the 11-yard touchdown run by Josey. To get that drive going, Josey bounced to the outside and dashed down the sideline for 43 yards before being dragged down from behind.

The Tigers went for it on fourth-and-1 from the Texas A&M 43 early in the fourth quarter and Franklin's run was short. Missouri made up for it when Tannehill was hit as he threw a pass which was intercepted by Randy Ponder.

Ponder returned it 45 yards and Franklin cut A&M's lead to 28-24 when he scored on an 8-yard run three plays later.

Pinkel was proud of his team's defensive improvement in the second half.

"We got out of drives. I think we were a little bit more aggressive in the secondary," he said. "We got a lot of balls batted down, we got some turnovers and we forced fourth down punts."

Tannehill threw for three touchdowns in the first half, but the Aggies managed only a field goal after that to lose their third game this season after leading by double digits at halftime.

Texas A&M coach Mike Sherman doesn't have an easy answer for why his team has struggled after halftime in its three losses.

Both teams lost fumbles in the third quarter. Texas A&M's Ryan Swope fumbled after a catch, but Missouri gave it back three plays later when Josey coughed it up. The Aggies didn't capitalize on that error and neither team scored in the quarter.

Tannehill hit Cyrus Gray on a short pass and he ran into the corner of the end zone for a 12-yard touchdown to tie the game at 14 early in the second quarter. Missouri's offense stalled on the next drive and they had to punt. The punt was shanked and it went just 22 yards, giving A&M the ball at the Missouri 41.

The Aggies took advantage of the short field when Tannehill found Swope for a 6-yard touchdown pass take a 21-14 lead in the second quarter.

Texas A&M pushed its advantage to 28-14 when Tannehill scored on a 3-yard touchdown run with about three minutes left in the second quarter.

The Tigers had a first down from the Texas A&M 11 late in the second quarter, but the offense stalled and they settled for a 26-yard field goal to make it 28-17 at halftime.

Franklin broke four tackles on a nifty 20-yard run on third-and-1 to give Missouri a 7-0 lead on the team's second drive of the game.

Tannehill's first touchdown pass was a 2-yard strike to Michael Lamothe that tied it at 7-all later in the first quarter.

Eric Waters caught a pass from Franklin and two Texas A&M defenders missed tackles as he dashed 42 yards for a touchdown to put Missouri back on top 14-7 with two seconds left in the first quarter.