Kansas offensive lineman Jeremiah Hatch is taken off the field on a stretcher in the first half of Kansas’ game against Oklahoma on Saturday, Oct. 15, 2011. Hatch returned to the Kansas sideline late in the second half. 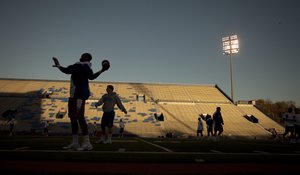 • A turn for the better: KU loses again, but shows gain

The senior was assisted by several KU trainers before being strapped into a stretcher and lifted onto a cart.

Play was delayed nine minutes to attend to Hatch, who was taken to Lawrence Memorial Hospital for evaluation.

Hatch returned to the KU sideline in street clothes during the fourth quarter.

“He’s fine. He’s now able to move all his limbs and everything,” KU coach Turner Gill said. “They still want to evaluate him in the next 24 hours and kind of see what happens here in the next few days. But I’m glad to see that he is OK, as far as able to move his limbs, because initially, he was not able to move anything.”

The Oklahoma game was Hatch’s 41st start at KU.

Professional boxer Victor Ortiz spoke to the KU football team Friday right after a team meal. His message was a familiar one: Believe.

“He just talked about how he was an underdog in many situations, and he came out on top,” KU cornerback Tyler Patmon said, “how nobody believed in him, but he knew he believed in himself. So it was a great message for this game.”

Ortiz was already in town Friday as a guest performer at Late Night in the Phog.

Opurum gets work on special teams

Toben Opurum played on special teams for the first time all year.

“We’ve got guys that weren’t able to go, so they stuck me in there,” Opurum said.

“You’ve always got to prepare like a starter, no matter if that’s on offense, defense or special teams, so I was able to step in there and do a pretty good job with that.”

Opurum said that KU special-teams coach Aaron Stamn suggested the idea to him.

The junior — who had been working with the punt team since the spring — recorded a tackle on an OU punt return in the first quarter.

KU running back Darrian Miller’s 66 rushing yards were a career high. His previous best was 63 rushing yards against McNeese State in the season opener. ... For the second game in a row, the Jayhawks lost the opening coin toss. Oklahoma chose to receive ... Temperature at kickoff was 68 degrees, under clear skies with winds out of the south at 9 mph.

Glad to hear that Hatch is okay. I missed a little bit of the fourth quarter, but up to that point the announcers hadn't given any upate on his condition. Did they ever mention him again after the injury?

I also can't help but wonder if the KU rushing attack might have done a little better in the second half if Hatch had been in there. Maybe that could have made a difference in keeping the game a little closer. But all in all, I feel a lot more encouraged about this team than I did last week.

Love from Texas Big Hatch! We were all praying for you and we are glad you are ok.

I'll tell you biggunz what I tell my annoying dog, "Get lost"!

Relieved to hear he is okay.

Announcer said repeatedly they would update his status but never did.

Thankfully, it sounds like he will be ok. This was a huge blow to KU. First, he is a leader and one of the best linemen we have. Just losing him was a blow. Then two guys had to move over and play positions they have not been playing and practicing all that much. Finally, a very inexperienced guy is put in at left tackle, one of the most important O line positions.

Does KU win the game with Hatch? Not likely. But they would have been more competitive. Perhaps the score is 41-24 or something, but I do think the KU offense stays on the field more producing more first downs and another score. They would have helped the defense stay off the field and perhaps limit an OU score.

Hey biggunz, so all it takes to have success in D1 football is good fans??? Are you sure about that?

KU could have had at least two scoring drives, and the fans would have been into the game it the fourth quarter. If the score was say 30-27 going into the 4th quarter, OU would have felt the pressure because they can't lose to a Kansas and still get a BCS CHampionship game.

Although, I think our talented running backs are being held back by this coaching staff, and I'm not sure how they think that will help them grow.

I also don't understand why they didn't run a quick passing play in the wildcat when Christian Matthews was taking the snaps. Doing things like that would free it up for triple options off those plays with 3 options of speed. Speed kills, even against a speedy defense because they can get themselves to far out of a play and not be able to make a play until 40 yards down field.

If Kansas would have scored two TDs in the 3rd quarter, that would have been a rocking stadium in the 4th quarter.

The coaching staff needs to let these kids do what they do best and put them in a position to have success. Then, and only when that happens, could the players be blamed if they're not giving the effort. I saw effort from the defense last night. They need to keep giving that kind of effort and by the end of this season, this defense could be a top 40 defense in the country(statistically) but they would get the ball back for our offense more.

There are some subtle changes that can be made on the way TG is handling things right now and it could make for big improvements in both attitude among the fans and players(particularly the fans that are able to be at the home games every home game).

I'm for selling out next week, don't give K-State fans a big part of the stadium to take up. Home Field Advantage. I think KU on paper is more talented, faster, and stronger than K-State is, if our coaches let our kids play and do what they do best.