A look at ‘Late Night’ through the years 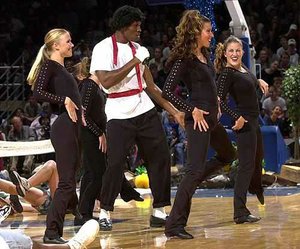 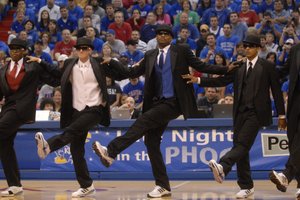 Complete coverage of Late Night in the Phog throughout the years.

Dressed in gold from head to toe, Bill “Vanilla Ice” Self provided arguably the coolest moment at the 2010 Late Night in the Phog in Allen Fieldhouse.

“Yo, Allen Fieldhouse, what’s up tonight?” Self, Kansas University’s basketball coach, bellowed into the microphone to begin the proceedings.

The answer? Some wild and crazy stuff, typical of the previous 25 season-opening Late Nights.

Self’s outfit, in his words “a takeoff on cheap silk,” drew the most laughs of last year’s three-hour show that concluded with a scrimmage highlighted by Marcus Morris’ 14 points and eight rebounds and Tyshawn Taylor’s nine points and two assists.

“I’m glad coach did that,” current KU senior Taylor said of modeling sunglasses, a shiny chain and blue KU cap, worn backwards. “I can talk about that at practice sometime.”

Emcee was former KU and NBA power forward Scot Pollard, who showed up wearing a tuxedo, white shirt and bow tie. Pollard ripped off his coat and ripped apart his shirt, revealing a black fake-tuxedo shirt. 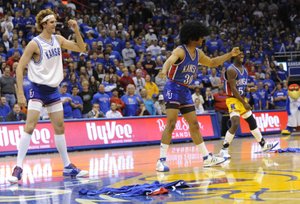 Jeff Withey, left, Xavier Henry, center, and Elijah Johnson dance during a freshman skit at the 2009 Late Night in the Phog. 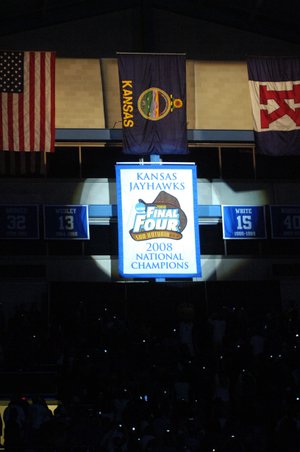 The Jayhawk's 2008 National Championship banner is unveiled Friday, Oct. 17, 2008 during Late Night in the Phog at Allen Fieldhouse.

KU unveiled its national championship banner to the delight of the fans. The thunderous ovation during the banner presentation had to be one of the loudest moments in fieldhouse lore.

Players were carted to the fieldhouse in a Corvette, Infiniti, Mercedes-Benz, Lexus, BMW, Hummer, Avalanche and stretch limousine onto a Red Carpet for interviews with “Survivor” winner and KU grad Danni Boatwright. 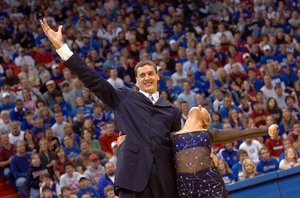 Sasha Kaun and his dance partner Andrea Hill bow to the crowd following the men's basketball team skits at Late Night at Allen Fieldhouse in 2006.

The junior class of Jeremy Case, Sasha Kaun, C.J. Giles, Darnell Jackson, Russell Robinson and Rodrick Stewart “waltzed” their way to an American Idol dance competition victory over the Jayhawk sophomores, who “tangoed,” and freshmen, who twirled to the “swing” in front of judges Self, Danny Manning and Aaron Miles.

For the first time ever, the festivities started at 6:30 p.m. instead of 10 or so according to new NCAA rules. 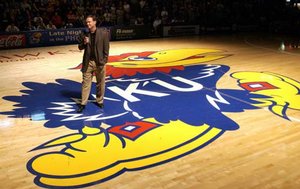 Kansas University men's basketball coach Bill Self greets KU fans during during his first Late Night in the Phog Friday at Allen Fieldhouse in 2003.

Self received a thunderous ovation after a showing of a highlight video of the coach’s introductory press conference.

“I have been in some loud places,” former Illinois coach Self said, “but that place got pretty loud there for a bit. That was a little bit overwhelming.”

The fans also rocked the building when the 1988 title team, led by coach Larry Brown, was introduced. 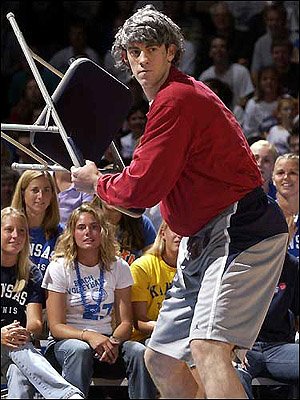 Williams said he couldn’t hear anything because of a faulty fieldhouse sound system. Late Night had a patriotic theme coming a month after the horrific events of Sept. 11, 2001. The sound system was improved by the next October, by the way. 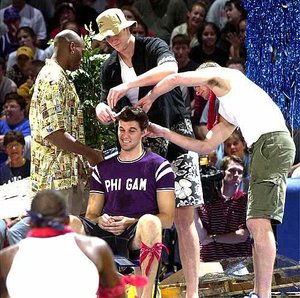 Drew Gooden sat in a canoe with John Crider as the canoe was pulley-ed across the fieldhouse floor. Jeff Carey, who showed with a wavy head of hair instead of his trademark crewcut, had teammates shave his head under the south goal. The canoe bit was funny, but took longer than expected to shave Carey’s moptop.

Big men Eric Chenowith and Carey played electric guitar as Collison sang vocals for the Limp Bizkit song, “Faith.”  They were joined by a drummer in the KU band.

The theme was “Night at the Naismiths” — an awards show in which guest judges rated acts and presented not an Oscar, but a “Naismith’’ to the winners.

A transfer from LSU, Lester Earl wore a black leather jacket in a spoof of 1950s music. Earl had some vicious dunks, as did Gregory and Paul Pierce in a pre-scrimmage dunk-athon. Also, Ryan Robertson had a big role in a skit as host of the game show, “The Price Is Right.” 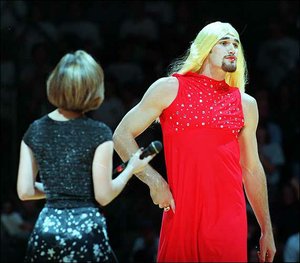 Scott Pollard showed up in drag to Late Night and proposed to his girlfriend, Mindy Camp, in 1996.

“Revlon Vixen” was the eccentric player’s color of choice.

That’s the night Pollard proposed marriage to his girlfriend, who accepted, by the way.

Now a color analyst for the Big Ten network, Mason has said one of his favorite moments at KU involved the reception he received at that Late Night. Earlier that day KU had won a football game during a 10-2 season.

Fans dressed as their favorite TV sitcom characters before the scrimmage. The Lone Ranger, Silver, Tonto, Gilligan’s Ginger and Granny Clampett all were on hand. This Late Night marked the debut of freshmen Jacque Vaughn, Pollard, B.J. Williams and Nick Proud, as well as Cal transfer Jerod Haase. Proud didn’t last long at KU, but the other guys were part of many victories.

Nobody has had more fun at Late Night than 7-foot-2 giant Greg Ostertag, who showed up in a Frankenstein monster outfit. Roy Williams’ entrance was followed by a ribbon-cutting ceremony for the new fieldhouse floor. Even though Late Night was televised, the TV show drew poor reviews.

Williams decided Late Night would be better suited on a Friday night, not Monday, the first day KU could practice in accordance with NCAA rules. Controversial move at the time, but a smart one, made so he could bring recruits to town for the made-for-recruiting event.

The fans responded, packing the building.

More than 13,000 fans showed to see the Jayhawks dance and scrimmage after a long Sunday of pro football, including a Chiefs’ home game against Detroit. During the scrimmage, current San Francisco coach Rex Walters scored 16 points and amazed the crowd with some violent dunks.

A $5 admission fee was charged to pay for two bands, who performed on a massive sound stage. Maddox, Rick Calloway, Freeman West and Jeff Gueldner lip-synched the song, “Simply Irresistible,” which was big-time funny because of a truly huge sound stage in the north end zone.

A lot of fans came to see the bands, evidenced by the smell of marijuana during the concert portion of the show.

Suffice it to say, admission was never charged again and no bands besides the KU pep band ever played at Late Night again. 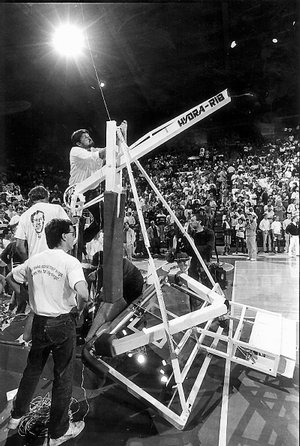 Workers had to replace the backboard after Alonzo Jamison's violent dunk during the 1988 Late Night.

Williams’ first Late Night — it was called “Later With Roy Williams” — drew 10,000 fans. Alonzo Jamison brought down the backboard on a pre-scrimmage dunk, thrilling the attendees, but delaying the proceedings. After the new goal was in place, Milt Newton led the Blue team to a 36-35 victory as he scored 16 points. 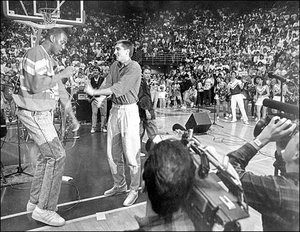 Current KU assistant coach Manning and teammate Scooter Barry sang The Temptations’ song: “My Girl.” The normally reserved Manning was willing to grab center stage prior to his senior season. KU went on to win the national title.

KU’s inaugural “Late Night With Larry Brown” was not a big deal.

“It was fabulous. I was thrilled with the students,” Brown said of the fans who showed at 12:01 on a Tuesday morning.

Many of the students wore T-shirts that read, “Late Night With Larry Brown. Starring the 1985-86 Kansas basketball team … all the way to Dallas.”

That KU team prophetically did reach the Final Four in Dallas. Current Jayhawk coach Self was a grad assistant on that team.

I always thought the Dating Game skit with Ostertag was one of the best Late Night moments. But, it's not mentioned here.

GARY - might want to proof read the historical stuff instead of just copy/paste.

Pollard no longer with the Indiana Pacers. ; )

"That’s the night Pollard, who is now with the Indiana Pacers, proposed marriage to his girlfriend, who accepted, by the way."

Does anyone have a link to watch Late Night online tonight? I'm studying abroad in Italy until early December, and I'm looking for a way to watch it. The only source I've found so far is the kuathletics.com stream that you have to pay for