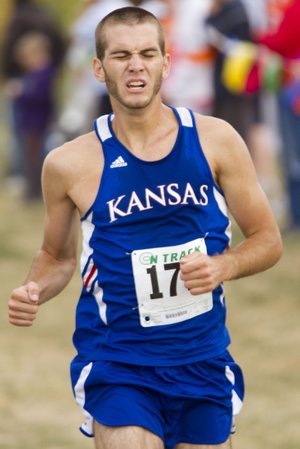 The team scores of the Haskell Indian Nations University Invite didn’t have Kansas University listed on Saturday, but that’s not a bad thing.

The Jayhawks participated, but it was for some less-experienced runners to have a chance to excel during a windy day on a flat course.

“It’s nice for us to come out here and compete against guys like this,” freshman Brendan Soucie said.

The men’s team had four runners, mostly middle-distance track runners, who all finished in the top 16. The purpose was so they could learn how to dictate a race from the front, assistant coach Michael Whittlesey said.

“Rather than getting them on a plane and flying somewhere where the competition is really at the high level,” he said, “it’s a much better meet where they can see the front of the race and compete very well.”

Soucie finished in fourth place in 26:21 after finishing in 12th place in the same meet last year. Sean Proehl finished sixth, Ben Wilson eighth and Colin Jokisch 16th. With the Big 12 Championships looming, this could be the last race of the season for some of those runners.

The KU women only had two runners and each ran for different reasons. Devin Wiegers is getting more action because she is a senior, while red-shirt freshman Madison Moser is recovering from an injury and needs to get back in the flow of competition.

Both the men and the women didn’t place because they each had fewer than five runners.

The Jayhawks will head to Madison, Wis., next week for the Wisconsin ADIDAS Invitational.

Haskell, the host team, finished fourth out of 10 teams on the women’s side and seventh out of eight on the men’s side. Talisa Budder finished sixth overall on in the women’s 5K with a 19:46. Thomas Zunie finished with a 27:17 in the 8K for a 12th-place finish.