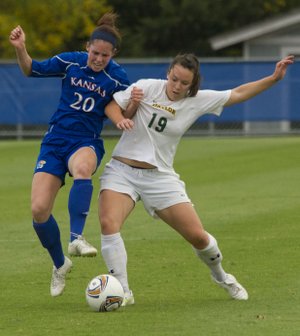 Despite a goal by junior Whitney Berry in the 71st minute, Kansas University’s soccer team fell to Baylor, 3-1, on Friday at the Jayhawk Soccer Complex.

The wind created a challenge in the attacking portion of the field, as both teams had just five shots on goal.

Trailing, 3-0, Berry put the Jayhawks on the scoreboard with a penalty kick during the 71st minute after a Baylor foul in the box.

The midfielder put her fifth score of the season into the lower left corner, under BU’s diving goalkeeper. Berry’s goal brought her career point total to 51 as she moved into a tie for fifth all-time at KU.

Berry accounted for half of the Kansas offense, collecting six attempts, half of which were on frame. Sophomore Amy Grow and freshman Jamie Fletcher each had two shots.

Kansas will travel to Creighton for a 1 p.m. match on Sunday.