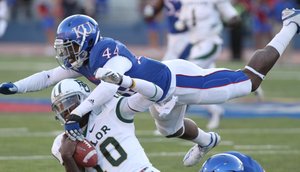 ... That's awsome... can someone please get Mike Stoops on the phone.

Why wouldnt we? We took a chance on Gill. Time for the next "Chance".

Maybe someday we'll get serious about our football program and look for a serious coach. Hell, just bring Mangino back.

Agree!!! His first game out they exploded for a blow out victory. MIKE Stoops is NOT BOB Stoops people.

“The way this game played out and ended, it made it one of the best times of my life.”

Note: This is not what you want opponents saying after visiting your stadium.

Just part of what has made the Big 12 the top football conference.

And there's one person to thank for all this...Turner Gill! You absolutely....SUCK!!!

Chuck Long's play calling, Vic Shealy's schemes, Jordan Webb's inability to make good decisions, the receivers who can't catch a cold, the defense's inability to tackle are also major factors in KU's lack of performance. Please place blame on everyone who deserves it and not just Gill. If it was just Gill and everyone else was doing their job right, KU would've beaten Texas Tech, ISU, and Baylor because Gill is not calling the plays or on the field failing to execute the plays. I'm not saying don't blame Gill because he is responsible for a lot of the issues with KU football, but not all of them. There is plenty of blame to pass around to everyone who deserves it.

Its Gills responsibility to ensure his coaches and players are executing as planned, and to make changes if they are not. Gill doesnt adjust to sh!t. Therefore, Gill is ultimately at fault.

I take it you didn't read the next to last sentence where I said Gill deserves his fair share of the blame but there are many other at fault as well and not just him.

You can't have the best time of your life if the team you beat isn't something you respect or care about.

The article doesn't mention how KU left Baylor scoreless for two quarters, and 3 points in another quarter, and how great we would have felt had we won the game. It's almost like this is a Baylor site. KUSports.com must have its fans pegged as wanting to hear about Baylor celebrations more than anything else. Weird.

Brent Venables would be a viable option as a head coach somewhere--but he's a hot head and a KSU grad. That's enough for me to pass on him being the next HC @ KU. Zenger absolutely has to get somebody w/ head coaching experience on the next run.

Main reason - most likely - that Baylor won was due to a blown pas interferance call in the 4th quarter with 30 seconds left. That call would have at least givne the KU field goal kicker a chance to make it and seal the game.

That unfortuantely is football.

Just some names...most not feasible. Some impossible.

KU football needs to get stronger fast. Within the next five years we'll be looking down the barrell of conference realignment again and no matter the tradition of KU basketball--we could be left in the abyss to rot into nothingness....competing against WSU, Creighton, NW Mo State, and the likes.

Zenger needs to act after this year. Sorry Gill. This is big business now. I hate that.

Ha ha ha would love to see John Gruden or Bill Cowher, can you imagine the animation on the side lines. Players would certainly learn how to win with either of those two. Too bad it won't happen but love the thought!!!!!

Remember, Gill won at Buffalo... For those of you who dont know, Buffalo is literally a wasteland and Gill's ability to create a winning program there speaks volumes about his coaching ability. When at Buffalo, he took over a squad that was 8-49 under their previous head coach. His first season they won 2 games, second season they went 5-7 and third season they went 7-5. Yes right now the future looks bad, however, this team was not exactly stacked when Gill took over and I think that you must give a coach atleast 3 years before you judge him. Firing turner Gill is not the right move and will do nothing but set this program back another 2 years.

Ok at KU Gill won 3 games his first season (and lost to a non FBS school) in his 2nd season he has still only won 2 games and he took over a program that in the last 3 years before his arival was 25-13. Gill will most likely lose the last 2 games of the season making us actually worse than last year. at buffalo he had one winning season 8-5 but the year after that his team fell off the map again. And remember that was in the MAC. Losing 5 games in the MAC does not make you good. What other confrence in America can you lose 4 or 5 games and still win the confrence championship? Get real he isn't fit to coach at this level get him out of here.

Sorry for the bad news, but I can tell you that Brent Venables is not going to be seriously interested in the KU job. He's been approached for equivalent, if not more attractive, head coaching jobs and passed already. He's got a great gig where he is now making a big enough paycheck, and when he goes it'll be to take over a program with a more optimistic future. He may return to take over K-state- not that I'd qualify that as a job with a higher profile per se-- (but it's where he played and coached) that is if Bill Snyder can talk him into it. Considering how close they are, I could see it, but chances of him wanting to take over our mess are slim, I think. He's an awesome coach and recruiter though...

What if we offered him 2 million? He's worth a shot.

you're right, definitely worth a shot. i think he would be in the mix of potential candidates (as he was for the Miami vacancy last year, from what i understand, although it's true that when push comes to shove most schools get nervous and opt for the finalist with successfull HC experience (see T. Gill) over maybe a better and more energetic top assistant coach candidate (what i think happened at Miami with their hire). Anyway, a HC offer at well over a $million a year is going to be attractive, with the downside being, and this is the big sticking point- what happens in two years if you can't turn things around? you're out of a job... (see, also, T. Gill)

All of you that are calling for Gills job are just rediculous. First off as some have pointed out, you have got to give a coach at least 3 years to field a team, and that usually is true when you are given a team! Their was no team when he came, and he is having to build from the bottom up. And for those of you that want to say that the previous teams were 25-13, you are correct, but that coach is not here and neither is the AD who put us in this situation. Also don't forget those of you who wanted Manginos head on a platter now want Gills as well!?!? And seriously what coach is going to take this job even if we could afford a good one?? We are paying Mangino a huge amount, and we are paying Gill a large amount as well. Even if we could get a "Great" Coach, we could never pay him anyway!

Word is Ole Miss is after Leach, shouldn't we at least ask Venables if he's interested?

Yea, lets bring in another coach that is tough to make up for the weak Gill then we can fire him in 2 years for not going to a bowl game and being too mean to the players. Then we can hire a players coach with good morals then we can fire him 2 years later. You are so smart, why would anybody turn down such a stress free job with such a supportive and loyal fan base.

Wow an improved Baylor team over last years that spanked KU barely comes away with a win because of some questionable calls and they are acting like they have never won a game before. I wonder how many KU fans thought before the game, we should win this one.