Teammates Justin Wesley (4) and Thomas Robinson slap hands after a Robinson converted a bucket and a foul against Fort Hays State during the first half on Tuesday, Nov. 8, 2011 at Allen Fieldhouse. 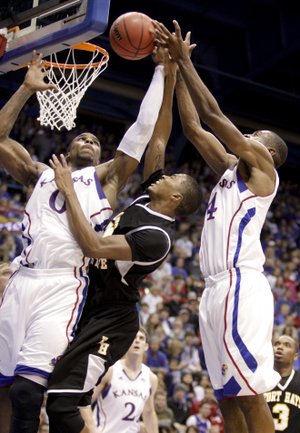 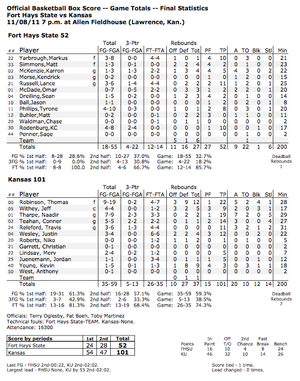 Tuesday night, during Kansas University’s 101-52 exhibition victory against Fort Hays State University, all of the Tigers’ eyes were on KU junior Thomas Robinson.

“He’s a heck of a player,” Great Bend native Matt Simmons said. “He’s great, obviously. We’ve known that for years. It’s exciting playing against someone of that caliber, and it just made me better today, playing against him.”

It also proved to be pretty painful. From start to finish, Robinson, who missed KU’s preseason opener last week because he was nursing an injury, tossed his 6-foot-10, 237-pound body into any and all FHSU players who were sent his way. Sometimes the Tigers’ defenders retreated. Other times, they stood their ground and wound up hitting the floor, whether because of Robinson’s raw power or powerful speed.

“If you’re just not used to playing against that kind of athleticism, it surprises you at the beginning,” Simmons said. “But it’s just basketball, when it comes down to it. You still gotta move your feet and play straight up and try not to foul.”

For the most part, FHSU’s players did that. In finishing with 22 points, 12 rebounds and four blocks, Robinson made just seven trips to the free-throw line in 28 minutes.

Asked if Robinson showed any ill effects of his injury, Fort Hays coach Mark Johnson was in good-enough spirits to crack a joke.

“He really didn’t,” Johnson said. “Maybe our guys need to get injured like that.”

The match-up with Robinson was the second for FHSU’s 11th-year head coach. The first came two years ago, when Robinson was a freshman. In addition to the obvious upgrades Robinson had made to his already-chiseled frame, Johnson said he thought Robinson had improved tremendously.

“He looks like a different player than when we were here two years ago,” Johnson said. “His body looks even bouncier, and his confidence level, more than anything … he’s just so confident now and wants the ball and expects great things. That’s what makes great players. He has the confidence to be a great player.”

“I think they’re pretty similar,” Dreiling said. “I mean, the scores were similar. They’re both good teams, both Big 12 teams. We just gotta get a lot better.”

Added Simmons, who finished with two points, four rebounds and four fouls in 23 minutes: “They’re both extremely physical and extremely athletic, and they’re both going to be battling, just like every other team in the Big 12. It’s gonna be a heck of a show.”

Comparing the two teams: One is in the upper strata of the Big XII and the other will finish in the bottom half of the Big XII. KU outperformed the purple-headed step child and we had two starters on the bench. Additionally, our walkons were playing significant minutes and even made cameo appearances in the first half.

All in all there is no comparison between KU and the other school.

Correct. Give this team a little more practice time together and game experience, and there shuld be a vast improvement between now and tournament time. Shades of the 2009 team, when they lost badly to Michigan State in the regular season, and then, almost (should have) beat them in the NCAA tourney. Just wish we would play Kenstinky about two to three weeks later this season, instead of the second game.

Glad your getting healthy T-Rob. With your height stabilizing at 6'10 for two articles in a row now, you should start feeling even better.

Good to hear about Robinson! My body has gotten bouncier over the years, too. And jigglier. Nice to learn I have some good company!