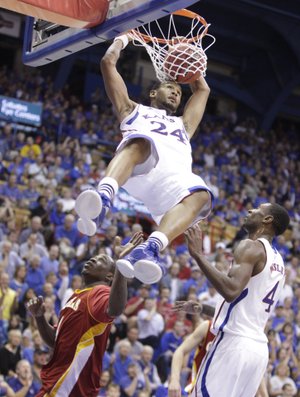 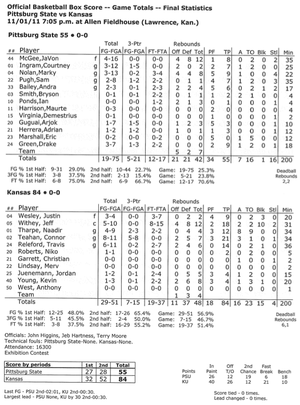 It might have been known that the Kansas University men’s basketball program would be without starters Elijah Johnson (suspension), Thomas Robinson (injury) and Tyshawn Taylor (suspension) for its exhibition opener against Pittsburg State on Tuesday. But that didn’t change the way the Gorillas approached the game.

“For me as a coach, it was prepare for Tyshawn, Elijah and Robinson,” second-year PSU coach Kevin Muff said after KU’s 84-55 victory. “I thought they were playing, so most of our preparation was centered around them, especially Thomas.”

If anything, Kansas’ being without three of its most high-profile players was a disappointment for the Div. II team making its ninth appearance all-time against KU.

“For me, it was,” said junior forward JaVon McGee, who finished with eight points and 12 rebounds in 35 minutes. “We thought Robinson was gonna play because some of us looked on Twitter, and he said he was gonna come back for this week. So we still prepared the same way. We didn’t find out until minutes before the game that he wasn’t going to play, so it was kind of a damper, for me. I wish I could’ve seen what I could’ve done against him.”

Added senior guard Drake Green: “As a player, you do want to go against the top prospect-type guys from a high major D-I. At the same time, whether they were playing or not, we still had to go in with the mind-set that we were gonna give it our best effort.”

For more than 25 minutes, Pitt State’s best effort looked as if it might make things interesting. But, with KU leading by six, senior Conner Teahan drained his fourth of five three-pointers at the 14:05 mark of the second half and sparked a 12-4 Kansas run that opened the door for the rout.

In addition to being impressed with KU’s less-heralded players, Muff said he was proud of his own team, particularly McGee.

“I thought JaVon had a heck of a game inside and did a good job trying to attack the basket and make some plays,” Muff said.

The Kansas City, Mo., native made just four of 16 shots, but relentlessly went after the rim and KU’s big men. The biggest obstacle between McGee and a big night was KU center Jeff Withey, who finished with 10 blocks, including two on McGee on one possession.

“I wasn’t expecting him to keep blocking my shot like that,” McGee said. “I thought I was gonna get a few calls, but, you know, that’s home-court advantage.”

Asked if he ever had faced a better shot-blocker, McGee smiled.

“Yeah, my freshman year. We played KU here, so I played against somebody better than him,” said McGee, referring to former KU center Cole Aldrich. “Other than that, probably not.”

Though not the kind of game it could have been had Johnson, Robinson and Taylor suited up, Muff praised Kansas coach Bill Self for having his players ready.

Muff, who played at Kansas State in the mid-1980s, made his first trip to Allen Fieldhouse since the 1985-86 season. Aside from a little different look, the old barn was pretty much as Muff remembered it.

“I just remember how loud it got,” he said. “And that hasn’t changed. ... It’s just a great environment and a great place to play basketball.”

A 20 point win for our team was a phenomenal start.

Jeff, despite rough edges, and Conner, were amazingly improved.

Conner played and shot as I always thought he could.

Nadiir running a team whistle to whistle and recovering from a bunch of Pillsbury PTs a d getting a W was inspiring.

They won with defense, feeding Jeff and a good shooting, especially from Conner.

TRel was in a thankless role of gluing lessers. Travis is going to be Brady, Tyrel and BRush. Self is going to use his athleticism to cover for everyone else's deficiencies.

Frankly, I was very proud of the team for fighting through inexperience, a bad first half and absent leaders to get a solid win.

Here's food for thought.......how many techs do you think Bill Self will get this year? The way I see it.....there will be times when he feels he needs to inspire his team. It's easy to be calm and mild mannered when you're stacked and have a top 5 team, but THIS KU team does not "immediately" qualify as that early this year.

This team will be tested early against quality opponents.....I just hope we don't become a bubble team. Remember, we have to play Texas twice, OSU twice, Baylor twice.......much toughter this year than years past.

Jaybate, you might want to look at that score again. It was beyond a 20-pt win.

Thx. But it was a typo on my phone's flea sized key board.

Why do you have such a passive alias? :-)

Why is TRob wearing a long sleeve shirt along with that vest? It was hotter than hell in there last night. The guy be very cold blooded.

I'm excited about Naadir Tharpe. He definitely made some bonehead turnovers, but he also showed flashes of greatness. He's no Aaron Miles, but he has the skills to do a lot of things that Miles used to do. Plus there's a good chance that he will be at KU for four years. He is one of those guys that will make all of his teammates better once he gets the feel for the college game.

I'm also really excited about Withey and Teahen. Connor has the confidence now to go along with his incredible three point shot. I hope that confidence follows him throughout the regular season...he will be the nail in the coffin for many opponents.

Kevin Young is lanky as all get out. He didn't really impress me much last night, but with Danny Manning coaching him up, I think he could be a solid role player at some point this season.

Lastly, I always see people on this board saying things like "Bill Self doesn't allow his players to play through mistakes. If they screw up they get benched automatically. Self should let freshman make mistakes without the fear of getting pulled, etc..." Well, you can eat those words, because Naadir made plenty of mistakes last night and got to play a ton of minutes, even though there were more experienced guys on the bench that could've filled in at PG.

Tharpe is the real deal in next year he will run the point like he has been there for 4 years already he will be one of the kids everyone says is he still there I thought he was a Sr. last year

How would one go about watching the replay of the game from last night?

Yes, please, someone, do tell.

You gotta set your DVR. And...tag the next show, so you get the whole thing. I forgot and missed the last 7-8 minutes.

I am glad to see players that will not normally get to play, get some game action. It is only exhibition, but it does help. I think this team will be pretty good. I think EJ is a stud. If Conner shoots like that Humphries kid shot it for Florida a few years ago, we could be something special. I hope he is up to the task. With everyone believing in him he should be fine. Go Jayhawks!

It appears to me that Tharpe is going to turn into a lot of fan's favorite. I felt better after last night's contest. I think we are going to be fine. However, I don't predict that we will gain any games on Kentucky this year.

Does any one know how long Tysawn and Eljahs suspensions are for.

They are only out for the two exhibition games.

Proud for CT. Now, he's got to do it when the wins count.