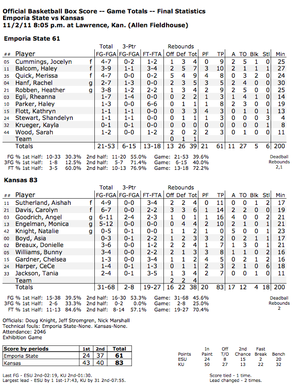 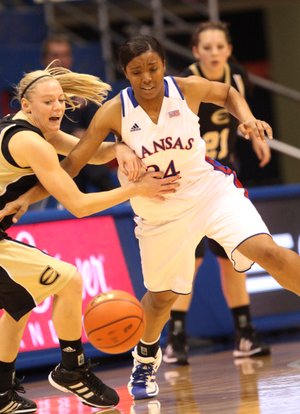 Since arriving at Kansas University, junior Angel Goodrich has been known for her ability to set things up.

The point guard did that and more Wednesday night at Allen Fieldhouse in leading the KU women’s basketball team to an 83-61 exhibition victory over Emporia State.

She is still looking for open teammates, but Goodrich said her role has changed this year, too. Now the Jayhawks are relying on her to be more of a scorer.

With that in mind, she has spent hours in the gym on her own, getting shots up. That helped the KU captain score 16 points in just 21 minutes against the Hornets.

“I feel like I’ve improved on my shot, and I’m really glad that it shows,” Goodrich said after hitting six of her 11 attempts, including two three-pointers in four tries.

What made the evening even better for Kansas, coach Bonnie Henrickson said, was Goodrich’s ability to get the offense going from a play-making standpoint.

“I thought her decisions were really, really good,” the coach said.

Even though Henrickson is asking Goodrich (four assists) to put up more shots, the coach sees her floor general reading the defense and attacking with the option that will be best for KU.

In the opening minutes of the first half, what Kansas needed was an up-tempo pace. Junior forward Carolyn Davis said Goodrich made that happen.

“It’s on the point guards to do that, and she takes that role seriously,” Davis said after a 14-point outing.

With the athleticism to beat ESU down the floor, make or miss, Davis said, Goodrich was going full-speed in transition.

“She gets frustrated when no one is running. It’s one of those things like we know if we run in transition, we’ll get an open layup, we’ll get an open shot,” Davis said. “That’s great for us. It sets the tempo, and it pushes everyone to play harder.”

Kansas outscored the Hornets 22-2 in transition. Goodrich was pleased to get the season started in that fashion.

“That’s what we want to do is set the tone, come out, start on the right foot,” she said.

There weren’t many problems for KU on a night that featured double-figure scoring from four of its five starters — in addition to Goodrich and Davis, senior forward Aishah Sutherland put up 11, and junior guard Monica Engelman added 10.

But one area that didn’t sit well with Henrickson was rebounding. The Jayhawks were outrebounded by Emporia, 39-38, and they surrendered 15 second-chance points.

“When the shot went up, we stopped working,” the coach said. “We stood up and watched.”

The game was never close outside of the first few minutes. Emporia State freshman forward Merissa Quick scored on an offensive rebound to give ESU a brief 4-3 advantage with less than 18 minutes to go in the first half.

The Jayhawks, though, took the ball down the floor, and Goodrich scored in the lane to put KU up 5-4.

Less than two minutes later, Hornets junior guard Jocelyn Cummings hit a runner off the glass to tie the game at 6, but Goodrich answered again with a layup and drew the foul. Following the first media timeout, the junior point guard converted a free throw to give Kansas the lead for good with 15:53 to go in the first half.

It was clear Goodrich — who scored eight of her team’s first nine points, including a three-pointer on the Jayhawks’ first possession — wasn’t interested in playing a close game in the exhibition.

Her speed and vision in the open floor, plus her deft ability to find her teammates with flawless passes, helped KU steadily grow its lead, which ballooned to 20 near the eight-minute mark, with a backcourt steal and lay-in by CeCe Harper that gave KU a 33-13 lead with 7:35 to go in the half.

ESU missed a number of shots within five to 10 feet in the opening minutes, likely the result of KU’s interior length, with Davis and Sutherland giving the visiting Hornets trouble.

On the other end of the floor, Kansas took an assertive approach, going to the paint and rim whenever it could. That led to plenty of whistles on ESU, and the Jayhawks scored 11 of their first-half points at the charity stripe, where they only misfired on two freebies.

Despite going the final 5:11 of the first half without a field goal, Kansas led 43-24 at the break, with Davis and Goodrich (12 points apiece) combining to match the Hornets’ scoring output by themselves.

Lions reunion: Wednesday’s exhibition marked a hardwood reunion for local Lawrence High products Tania Jackson of KU and Haley Parker of the Hornets, both sophomores. With the 6-2 Jackson playing in the paint and the 5-8 Parker on the perimeter, the former Lions teammates didn’t go head-to-head too often, but they did dive after the same loose ball near mid-court early in the second half. Parker had the scoring edge in the LHS alumni showdown, finishing with eight points and two assists in 19 minutes. Jackson scored seven points and grabbed four rebounds in 11 minutes.

Freshman five: All five of the Jayhawks’ freshman took the floor in the exhibition victory. Natalie Knight started at guard for KU, and though she missed all five of her shot attempts from the floor, she had a team-best five assists.

Donielle Breaux, Asia Boyd, Catherine “Bunny” Williams and Chelsea Gardner all played in the first half off the bench. They combined to score 22 points. Williams led the freshmen with eight points on 3-of-4 shooting.

Next up: At 2 p.m. Sunday, Kansas will play host to Pittsburg State in its exhibition finale.

Im sorry that only 3 people care about you .

I like the "Zombie Yourself" ad at the top of the page. Nice!

I hope Angel finally gets to play a full season. She deserves some good luck. I like this team to improve a lot if she stays healthy.

Angel lead in scoring, Carolyn went 6-7, We got off to a 33-13 start then looked lethargic from there. To be expected in a school night exhibition. All the freshmen played more minutes than they will later in the season. Plus ESU is an above average D-2 team playing in the field house. They were scrapping hard to keep this one close. Way to take care of business ladies.

As the majority of commenters have said, this promises to be an exciting year. I wish I lived close enough to Lawrence to take in more than one game a year.

I hope the non-conference doesn't prove to be another tease like it has so many times in the past, but I have a feeling it will. KU was picked to finish 7th by the coaches in the league, but at least they're ahead of KSU (9th) and MU (10th). I don't think KU is playing a very difficult non-conference schedule so hopefully KU can carry that confidence into Big 12 play and finish higher than predicted this season and actually make the NCAA tournament. If KU misses the NCAA tournament again this year, Bonnie absolutely must go because this is the 3rd most visible sport and KU has been horrendous since the late 90's.

Texashawk, I share your hope (and that of others) that this will be a banner year. In part, my motivation for hoping for the team's success is selfish. If they do well, I get to see more of them on television. Last year, as in other recent years, injuries were a major factor in the won loss record. I hope Ms. Goodrich and all of the team stays healthy.

You really should. As a close follower of KU women's hoops for the past ten years I can tell you that this is the most experienced and talented team we've had in years. Plus we finally have "big-12" size at all positions -PG. But Angel makes up for it with her "special" passing ability. She is a little baller...worth the price of admission alone. If the defense can improve in Big XII play I see them finally breaking thru and making the tourney.

The KU woman basketball team played a good game against Emporia state! This is a good way to start the season! This will be a great year for the lady Jayhawks! Go Lady Hawks!

The KU woman basketball team played a good game against Emporia state! This is a good way to start the season! This will be a great year for the lady Jayhawks! Go Lady Hawks!