Miami Heat guard Mario Chalmers (15) looks to shoot against the Chicago Bulls defense during the first quarter of Game 5 of the NBA basketball Eastern Conference finals Thursday, May 26, 2011, in Chicago. 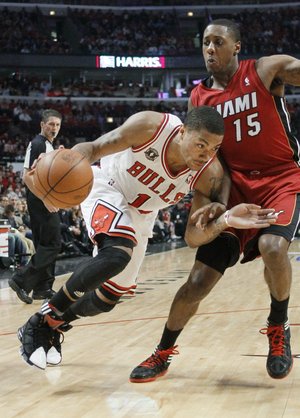 Miami — Mario Chalmers, whose Kansas Jayhawks defeated Derrick Rose’s Memphis Tigers in the 2008 NCAA championship game, did not gloat after once again emerging victorious against Rose, this time in the 2011 NBA Eastern Conference finals.

“I just told him to keep his head up and keep working,” Chalmers told the South Florida Sun-Sentinel in the wake of his Miami Heat’s 83-80 series clinching victory over Chicago Bulls.

“He had a great series,” Chalmers added of a series won by Miami, four games to one.

Chalmers hit the crucial three-point shot that forced overtime in KU’s 75-68 victory over Memphis in ’08 in San Antonio.

That’s the game in which KU battled back from a nine-point deficit with two minutes left in regulation.

Thursday, Chalmers knocked down a key three-pointer in the third quarter. A reserve guard, he watched from the bench as the Bulls blew a 12-point lead in the final three minutes.

He was asked to pinpoint the common thread between the KU comeback and the Miami comeback.

“Just big plays being made,” Chalmers said. “Our defense picked it up, and we were hitting big shots. “(We were) refusing to accept defeat. That’s the main thing.”

“I expect that from them,” Chalmers said of stellar play in crunch time. “They always turn it on when the game is on the line, especially D-Wade. I’ve been with him my whole NBA career and I’ve seen him do some amazing stuff. I wasn’t shocked at all.”

Game One of the NBA Finals between the Heat and Dallas Mavericks is set for 8 p.m., Tuesday in Miami. Chalmers’ role?

“I just try to that spark off the bench. I try to change the game and make it easier for everybody else out there,” Chalmers said.

According to his Mario V Chalmers Foundation Website, the third-annual National Championship Golf Classic will be Aug. 5 at Alvamar.

The Associated Press contributed to this report.

Oh, come on! I love Chalmers and all but HE didn't one-up anybody. The Heat upended the Bulls. PLEASE don't try to make it sound like Mario outplayed the freaking NBA MVP, because that ain't how it happened.

My thoughts exactly. Is unfounded bragging becoming the norm for a growing number of Jayhawks? (Maybe it is the Morris Effect).

My thoughts exactly. Is unfounded bragging becoming the norm for a growing number of Jayhawks? (Maybe it is the Morris Effect).

No bragging was done by Mario in this article. The headline was from the author or editor (no quote marks) There is no quote from Mario bragging about anything in this article. The only quote from Mario about his own play was “I just try to that spark off the bench. I try to change the game and make it easier for everybody else out there,” That in no way can be construed as bragging. Cussack118's comment appeared to be calling out the author/editor for trying to make it look like Mario outplayed Rose. He was not calling out Mario.

Yes, thank you. I was no way indicting Chalmers here, who said or did nothing wrong. Rather, LJW overplayed this "angle."

Mario had a pretty good game coming off the bench in game four. But yeah, to read this article sounds like he took Rose out behind the woodshed.

That series began and ended the minute Boozer put on a Chicago uniform. Korver was pretty sad too. I liked Pippen putting Noah in the same sentence as Boozer for the reason the Bulls lost. Does Pippen have a forty-five IQ?

Yeah, 14.4 million dollar guy who gets routinely picked on in a pick and roll vs. a 3.5 million dollar guy who played his ass off picking up slack for Korver and Boozer. If I played with those guys I'd be pissed off enough to get technicals too. Noah, as big a dbag as he can be, cares about winning. Boozer is a paycheck player that only plays in contract years. To him the playoffs are something to be done with as fast as possible so he can get on to vacation time.

In reference to Boozer, I am reminded of Ron White, "There's a lot of quit in that boy..."

Its just an angle for a story. Calm down. As you notice, the article itself says nothing about MC upending the Bulls or Rose all by himself. It is just an interesting common thread that is supposed to attract readers. That's what Headlines are for!!!

Uh, I think everyone is calm. It's just a stupid non-story story. Call it intellectually dishonest if you prefer.

this is an example of a bunch of LJW staffers bored to tears looking to write about something we will find interesting. Make up stories about Daniels, you'll get more hits:

Probably not a very good headline but still shows Mario's class! I like that among these big-headed millionaires and we don't often see it!

mario...and class....is that the same class he was showing his rookie year in the NBA when he got caught with the wacky tobaccy.

I hear your point but Mario is a stand up guy who did not point to Beasley who was the one smoking. The NBA failed to take drug tests to identify the guilty so this was simply guilt by association.

Facts need to be complete to give a true picture. Did I leave anything out?

News flash every KU basketball player with the exception of maybe juenuman(sp) smokes pot. Been that way for some time now, but what does that have to do with marios class as a person? Btw nothing was found in the room just the smell of pot was detected. The players(beasley, rio, and darrell) got in trouble for violating rookie camp rules, which was having girls in their room.

You're tellin' me Tyrel Reed is a pothead? Please...

He is not a millionaire.

MC had a key foul during the Bulls run earlier.

Wow, isn't that so true!

SO freaking true! That was about the only common thread I saw. Its hilarious to think that at this point free throw shooting has cost Derrick Rose a National Championship and a shot at an NBA Championship. If I was him thats all I would work on in the offseason.

Didn't read the article. Didn't need to. With all the national attention the rose v chalmers match up has gotten I feel I know everything ;)

Chlamers taking his talents to South Beach. That is beautiful.

Ah, the dog days of summer. So many of us show up hear all month to see the story that Daniels has enrolled in KU and then hear about the practice sessions preparing for a huge game in MSG in November.

The paper has to put something up and cannot assume we have all read of or seen the games in the NBA.

Mario is still my favorite player at KU since he was a freshman. If you look at plus/minus for the Miami Heat during the playoffs Mario is tied for third on the team with +65 while the starter, Mike Bibby is second to last with -30. Mario is a decent defender, a good passer and has shot well. He deserves the same credit for the series wins as any other player. It is a team game.

Look, I love Chalmers, and he is a great spark off the bench, but....

You do realize how poor a state +/- is to determine a players game, right? If a player starts the game and defends Steve Nash, it is tougher to have a high + than if you come off the bench and get time against Aaron Brooks.

The top two guys on that list were getting huge bonuses when Boozer was in the game.

Check out this article to see just how bad Boozer was:

Not saying +/- is a useless stat, but you have to understand those guys are not guarding the same people all the time.

It should say, "how poor a stat," need a damn post edit.

Can I please hijack this thread and start an original (not a google'd list) but a true yo mamma joke list right now? Only originals apply.

Yo mamma so freaky that Marilyn Manson said to yo mamma, "Hey... stop.... lets do something normal, like... watch TV wrapped in pork and spandex.... and eat some orange and vampire blood flavored silicone."

The NBA is a waste of time. Let's talk about something relevant.

Just saw The Hangover 2: Spoilers on the way so skip this post if you care.

1] Not quite as good as 1 [Copied plot outline right down the line..only not as well] 2] Best Actor - The Monkey 3] Second Best Actor - Mike Tyson 4] Third Best Actor - The guy who played Eddie in the first movie. {Honorable mention - the Silent Monk] 5] A lot more genitilia shown in this one. 6] A lot more Allen in this one. 7] Justin Bartha had about three lines and got a free trip to Cambodia!! 8] Stu's fiancee a lot hotter in this one but kept her clothes on. 9] Movie did no favors for Bangkok tourism. 10] The final sequence of the night's activities on the cellphone are almost disturbing and ten times grosser than the original photos.

I bought The Hangover DVD the day it came out. I'll wait till this one hits the $5.00 bin.

[PS Still, there where enough scenes whereby I laughed my a$$ off that you all should go see it and judge for yourself.

Hangover 2 is incredible, Mario is mediocre, Rose is only going to get better, Lebron will never be Jordan, D Wade has puffed up like Bonds or Sosa and MacGuire...anyone else notice - it's freakish to me - but i don't want to presume he's a juice head, speaking of steroid freaks, the LJW just reported that Aquib Talib was a mistress of the Govenator.

Hangover 2 was exactly what I expected; good for quite a few laughs, but ultimately not as good as the original. Mario plays his role very well and that is why he was one of the only players that stayed on the team after Lebron came. Rose isn't a bad free throw shooter, he has just missed some HUGE ones.(He shot 86% from the line this year, which is one of the best marks in the NBA) Deandre Daniels is going to wait until everyone has given up waiting and then just send out a mass text to all the news outlets at like 4 in the morning one random day this summer telling his choice. Also, the Lebron/Jordan comparisons need to stop NOW. Lebron has comparable stats and may very well end up with superior stats by the time his career is over, but until he starts winning titles at a record pace and taking over games in the Finals, he will never be the WINNER that Jordan was. As much as it pains me to say it, without the rings, Lebron will be just like Wilt. That is, an unbelievably incredible talent who filled up the stat sheet but ultimately didn't win nearly as much as he should have with his talent. (Love Wilt, but he should have won more than two titles, especially with some of the teams he had)

The mention of chipmunk Wade is interesting. I was wondering the same thing why he is all puffed up. Not a pretty sight.

what a cheesey headline. there was no mono y mono between Chalmers and Rose. please don't insult the readers

Chalmers name had to be in the title people. Calm down. Why can't you just be proud a Jayhawk is doing well in the nba. Would you have even read it if the title was "bulls lost" or "heat wins"? Its just a fun little coincidence.