Virginia Commonwealth head coach Shaka Smart talks with media members during a press conference on Saturday, March 26, 2011 at the Alamodome in San Antonio. 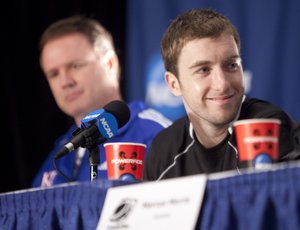 Kansas will take on Virginia Commonwealth in an Elite Eight matchup Sunday, March 27, 2011.

San Antonio — Maybe they learned from the way Richmond handled things when the Spiders took their turn at toppling Kansas University on Friday night and failed.

Maybe, because of their label as a mid-major, they’re more comfortable this way.

Maybe it’s just who they are.

Regardless, during Saturday’s media session at the Alamodome, the Virginia Commonwealth Rams were open and accepting about their role as big-time underdogs in today’s 1:20 p.m. matchup with top-seeded Kansas.

“One of my sisters showed me something where it said Kansas now has a 44 percent chance of winning the national championship, and we have a 0.9 percent chance,” VCU coach Shaka Smart said. “So it’s kind of like the movie ‘Dumb and Dumber,’ ‘So you’re saying we’ve got a chance.’”

VCU was a perfect picture of team unity in how it responded to questions about the Rams’ underdog status.

“There might be pressure for Kansas,” VCU point guard Joey Rodriguez said. “They came in thinking they were supposed to win a national championship. We weren’t even supposed to be in the tournament, let alone the Elite Eight. If we lose, we still had a great season. If they lose, it might be disappointing to them.”

Asked what opened his eyes most about the Jayhawks, VCU senior Brandon Rozzell said: “What doesn’t impress you is the question. From the starting five to about six guys on the bench, they’re amazing. They’re big, they’re physical, they’re strong. They can shoot the three, they can take you off the dribble. Anything you ask for in a great team, they have. So we’re gonna have to come out and play our best basketball if we want to win.”

That VCU is in this position is rather remarkable. Because the NCAA Tournament expanded from 65 to 68 teams this season, the Rams already have played one more game than the other teams still alive. Tossed into one of four play-in games that kicked off the tournament, 11th-seeded VCU rocked USC by 13, then knocked off No. 6 Georgetown and No. 3 Purdue by 18 before outlasting Florida State, 72-71 in overtime, two nights ago.

With the emotional ups and downs of losing in the conference tournament and wondering if they’d be left out of the Big Dance to preparing to play KU in the Elite Eight, it would be easy to question if this team had anything left in the tank. The answer, from all corners of the VCU locker room, was an emphatic yes.

“Concerns send you home at this point,” Smart said. “Excuses send you home. The teams advancing in the NCAA Tournament, they don’t look at the glass half empty. They don’t look at the roadblocks on the way. We’ve got a tall task on our hands. But if we sit back and think about being fatigued or having played an extra game or how much time we’ve spent or how much time we’ve slept, that’s the quickest way to go home. And we don’t want to go home. We want to advance.”

Added Rozzell: “We are built for this.”

Said junior Bradford Burgess: “Our strength and conditioning coach, Daniel Roose, he’s just crazy. He just pushes us so hard, even harder than we think we can go. That’s what makes us go. When other teams think they can’t go anymore, we’re still foot-on-the-gas, still going.”

The question of fatigue enters the conversation with most teams at this time year. But Rodriguez insists that it will not be a problem for the Rams tonight. Asked why, Rodriguez said, “Just try to remember when you were 20.”

This is a very solid team.

Tomorrow, we must play all out for forty minutes....

Yeah, own the statsheet...got it

Religion, science, and politics taught us long ago. Any thing truly wise is worth writing down and repeating.

I played baseball in the same athletic conference as Kenyon College, Shaka Smart's alma mater. There was no athletic scholarships and while we enjoyed the competition, academics always came first. Although Kenyon College is well known for its nationally ranked swimming program and where actor Paul Newman studied, it was able to lure Smart away from scholarship offers from both Harvard and Yale.

Smart has a graduate diploma, is an exceptionally intelligent man, and is a great teacher of the game of basketball. While the game should be relatively easy, i am still glad that Smart won't get a week to prepare his team for the Jayhawks.

Are you the cycling Kansas Bob who writes climbing articles?

Thats another guy. However, there were a lot of fine cyclists at Oberlin, even though the most popular sport was Ultimate Frisbee, not a recognized conference sport but very popular on the college club circuit.

After the tremendous job Self and the other coaches did to prepare the team for Richmond, I would imagine that it is Smart that is glad that Self does not get a week to prepare for VCU.

The commentary is always that we can take the opponent on the dribble, shoot the three... This is good, but we play shut down D that takes an opponent out of their game and rebound like maniacs.

I have a feeling the City of Richmond is going to hate Kansas after today.

Remember the bumper stickers.............."Virginia is for Lovers" We don't hate folks over here, especially over a game of basketball! Richmond is hotter than the fire in April 1865 after the guys returned to the Siegel Center which you guys call a "crackerbox" I think. I loved reading the (Kansas) posts the day or two before the game showing the 15-20 point spreads in KU's favor. Every post showed this huge point spread, it was sickening. Careful with that kind of confidence. Old VCU alum 1977

Remember the bumper stickers.............."Virginia is for Lovers" We don't hate folks over here, especially over a game of basketball! Richmond is hotter than the fire in April 1865 after the guys returned to the Siegel Center which you guys call a "crackerbox" I think. I loved reading the (Kansas) posts the day or two before the game showing the 15-20 point spreads in KU's favor. Every post showed this huge point spread, it was sickening. Careful with that kind of confidence. Old VCU alum 1977

I like Coach Smart merely for his "Dumb and Dumber" allusion. Well played, sir.

Great line. Here's a youtube link to the movie scene:

Dumb and Dumber 'There's a Chance' by Vi Cross

To me, the VCU strategy is a simple one. Pack it inside and try to make us beat them with outside jump shots. They will try very hard to get under the skin of the twins, hoping to draw emotional fouls. TR is a big key. I don't see anyone on the VCU roster than can handle him on the boards. And Travis.....be ready. I'm super confident that if called on, he can play the type of lock down "D" the VCU kids have never seen in their lives.

VCU's confidence in its own endurance is worth a tremendous amount.

John Wooden always said that convincing his team that it was the best conditioned team in the country was crucial to being a champion.

Fatigue makes cowards of us all.

Great conditioning makes us confident and think nothing of scaling mountains others seek to avoid.

The strategic choice is simple. If Self and his players believe they are in as good of condition as VCU, then they must turn this into a war of conditioning that lets KU's greater number of good players and deeper bench prevail.

If Self and his players believe they are carrying too much Hudy-weight to be in the kind of cardio-pulmonary condition VCU is in, then they must turn this into a war of strength.

Of course, the most certain way to break VCU's back is to prove to them that they are not the better conditioned team. Prove this to them and they will break immediately.

Fatigue makes cowards of us all.

Shaka Smart has wisely identified and had his players communicate conditioning as VCU's possible edge against KU.

It is its only likely edge, except for a possible MUA at the 3.

KU's players are carrying a lot of Hudy-weight.

This can mean that they are very strong, but not capable of avoiding fatigue at a relentless fast pace for 40 minutes.

KU has to choose.

Or war of conditioning.

My approach would be this: use a long bench, get physical, apply more pressure on defense than VCU has ever experienced (which is what Self defense is), and run as long as they want to; then slow it down when they want to.

Take what they give us.

Make them do it all.

Own the perimeter second.

Attack from every where.

Just go out and play Kansas Basketball and all will be well.

I've always been curious if teams like VCU and Richmond would share their scouting reports on KU. With VCU having basically 2 days to prepare, I wonder if they called in a favor to their cross-town rivals.

I can't believe how the Selection Committee Screwed every #1 Seed this year.

Who would even want to watch a national televised game between VCU and Butler in November, December, or January? No network would want to see a match up like that.

I can't believe the Referees gave to more fouls, more favorable calls to VCU. To a FILL IN TEAM. This Team will not be in the Tournament in the Next 20 years. It will be nothing more than a memory.

IF VCU wins both games Will they Get an ASTERISK BY there name as as FILL IN TEAM?