KU seniors Patrick Watkins, Holton, left, and Jay Ryan, of Garden City, can’t contain their disappointment at Johnny’s Tavern, 401 N. Second St., during Sunday’s game against Virginia Commonwealth University. Kansas fans filled local bars to take in the game between No. 1-seed KU and No. 11-seed VCU, but the mood soured early as the Rams dominated the game. KU lost 71-61.

Fans Robin Carver and Dwight Clarkson were among the thousands in Lawrence let down by KU’s loss to VCU. The two shared their thoughts on the end of what had been a successful season.

Jayhawk fans Chris Dunagan, James Koop and Esther Koop, and Matt Meyer talk about why they ventured to downtown Lawrence to watch Sunday’s Elight Eight game in the NCCA Tournament. 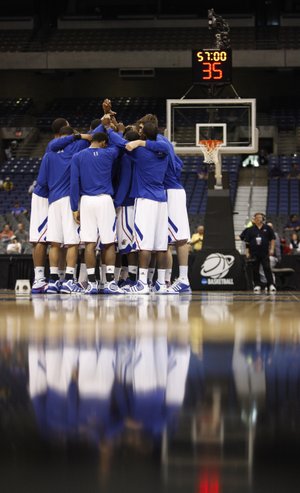 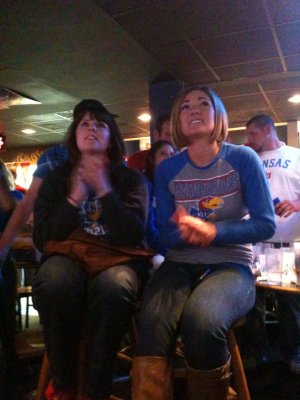 Snow showers only dampened the mood of Jayhawk fans who poured out onto Massachusetts Street Sunday after Kansas University’s heartbreaking loss to Virginia Commonwealth University.

He was among a trio of KU seniors who were on their way home after watching the game at Quinton’s, 615 Mass.

“We were ranked No. 1, and it was ours to lose,” said DeBoest, who was among the thousands of Jayhawk fans in Lawrence stunned by KU’s 71-61 loss.

DeBoest’s friend Mary Suellentrop said the seniors were hoping to bookend their college years with NCAA titles. They were freshmen when KU won the 2008 National Championship.

“We were looking for a freshman/senior win. We thought it was our year,” Suellentrop said.

The mood was just as bleak for the fans leaving Buffalo Wild Wings, 1012 Mass.

“We keep saying next year, but then we keep blowing it,” her friend Robin Carver said.

“That’s how much we support our team,” Carver said.

“I can hear the sales going down the drain,” Smith said as the crowd shuffled out the door. But it was more than just money.

“We want to see them win just as bad as everyone else does,” he said.

Earlier in the day the spirit was much more jovial at the restaurant. Nearly four hours before tipoff, fans began staking out seats for the big game.

Among the first to arrive was James Koop, who came from Blue Springs, Mo., with his family.

Along with a full wardrobe of crimson and blue, Koop proudly displayed a Jayhawk tattoo on his calf.

“It’s KU, one of the best teams in the nation,” Koop said. “We are winning this.”

The restaurant was full by 11 a.m. An hour before the game, the bar replayed the final five minutes of KU’s 2008 championship game against Memphis.

Matt Meyer had been at the restaurant since 9:45 a.m. and was ready for a win.

“I’m feeling pretty confident. The team is kind of on a mission right now,” he said.

“I really feel good about this bracket,” Wilkerson said.

He was wearing the store’s biggest seller — thanks to actor Charlie Sheen — a T-shirt that read “Winning! Duh.” Next to the catchphrase was a Jayhawk.

Wilkerson had hoped the next big seller would have been the Final Four shirts in Jayhawk colors that were already at the store, but not yet for sale.

“We’ll start selling them as soon as they win,” he said.

By half-time, the atmosphere had turned a “little grim” at Free State Brewing Company, 636 Mass.

Joy Harris was among the couple dozen people perched around the bar watching the game.

“I’m a little anxious. But I still have hope,” she said just as KU was starting to mount a comeback in the second half.

The hope dwindled in the final minutes of the game as VCU once again established a healthy lead. As the seconds ticked down, fans at Buffalo Wild Wings began heading outside into the snowy weather.

“We gave it away,” Dwight Clarkson said with a shrug.

When you are ready to think about next year, this story from the NY Times, combined with the very real possibility of an NBA lock-out next year, might cheer you up regarding what the twins are thinking.

If this happens there's going to be a bunch of ticked off Kentucky Freshmen who are riding the pine!

Boo hooo! This just means that those of us covering OT so that loyal KU fans can watch the game, get drunk and party... won't have to cover any more. The kids from Virginia just wanted it more... and you can't ride your rep forever. Sometime you have to earn it.

You can have your mule for spring planting.

Kentucky vs North Carolina. Kind of like watching Kansas State vs Missouri only at a much higher level. Great season Jayhawks. Last loss is always tough. Can't wait until next year!

To all the players - Thanks for a fantastic season. Off day (really off) today, but you've been great to watch all year.

Twins, Josh, Tyshawn - Come back next year - You'll be a lock for the Championships.

Coach Self - Couldn't think of another Coach I'd rather have in Lawrence.

Another troll comment below by strikeweso. I always suspected strikeweso, but now he's made it perfectly clear: he's been trolling us for a couple years at least, staying just on the edge of a "possible fan". Today he's made it too easy, no true KU fan would react this way; he's a troll. Well I guess we can confirm he isn't a Tar Heel or UK guy.

Don't ever think it's a lock. Before the game w/VCU, I already was thinking who we might be playing in the championship. I couldn't imagine us losing to VCU or Butler. But I won't be fooled again. If there is a way to lose..we seem to find it.

Thanks for nothing Reed. You should have called in sick today, we'd be in the Final 4 if you had.

What a really dumb thing to say. Thanks for nothing?! ? After Tyrel has thrilled us for four wonderful years with his corner shots and runs at the basket?! Talk about someone who leaves his heart and soul on the floor every game. Thanks Tyrel for choosing KU . . . we look forward to hearing even more great things about you as you move on with your life. Rock Chalk!

Thanks Pho. Couldn't have said it better myself. Unless you are someone who played college ball and won the NCAA championship all 4 of your years, quit bitching! I'm sick of listening to people complain on these posts who have probably never played a sport in their life. Grow up. Our Jayhawks are just awesome! Tyrel, Brady and Mario, thanks for all the wonderful memories! I know our disappointment doesn't even begin to match how disappointed I know all of your are. We still love you guys! Can't wait until next year! Marcus and Markieff, sure hope you come back!

Strike, you are my hero!

Man, what's your problem with Tyrel? He kick your a$$ all over the place in high school?

STRIKE---THIS IS ABOUT THE DUMBEST POST I HAVE EVER SEEN. YOU CLEARLY DO NOT UNDERSTAND BASKETBALL.

great season boys proud of u its just a game its heartbreaking when u loose thats why we call it march madness.there is only one winner.it would b just as heartbreaking it we would have lose the first game or the championship game it was a great ride compare to last year its fun to watch the jayhawks self your a great coach keep being the best recruiter their are a lot of division 1 schools that would like to b a great basketball team like ours every year final four next year!

Better recruiters than Self:

Kinda odd to talk about recruiting when maybe 2 more shots made a nd a few more free throws would have won it for us.

Well Kenneth..I was responding to a post. If that bothers you..too f'ing bad. Why don't you MOVE ON?

Ok, so Strikewso is FIRED, anybody else?

Our terrible freethrow shooting came back to roost! This loss was unacceptable, worse, than Northern Iowa last season. Bill Self hwas got to get his teams prepared better. An 11 seed beat the 1 seed for the right for the Final Four. This loss is on Bill Self!

wow, how long have you been a Div I coach for? You sure do seem to know all about coaching! You are out of your mind. We have a great team and a great coach. No one is perfect and we just had a bad day. We can't win every single year, sorry, but that would get boring. VCU played a great game, and their 3's were falling from everywhere, and we couldn't get anything to fall. It happens. it sucks that it happened today, but it did. Grow up please and quit criticizing something you know nothing about.

u hit it right on about saying they were hitting it from everywhere and we just had a unkansas like day at the wrong time. But no matter what Jayhawks for Life.

I thought this team was unstoppable, I really thought we would pull through. All the cards fell into our favor during this tournament, maybe just a little too much. Here's to next year. GO HAWKS!

Thanks for the great ride, guys! Once again, a stellar season. Best wishes to the seniors . . . Mario, Brady, and Tyrel, you will be missed! And, I look forward to seeing which way the ball bounces next year with the rest of the team. You can't beat KU basketball. Also, thanks, as always, to Coach Self and the rest of the coaching staff . . . it's been a tough year and you made us proud.

The pressure got to us. The 08 team was able to come out like gangbusters and win, especially against Carolina. Dont know the remedy for this. We still had an incredible season, but another banner sure would have been sweet.

that would be a great Final Four!

VCU is loose, the school and kids are terrific. Shaka is smart and the guys have incredible endurance. We don't have 5 kids waiting for an NBA call though. Good job though after messing with the U of R players the other night. The guys know each other, the schools are only 5-6 miles apart!