Lawrence police plan ahead for Final Four weekend, ready for a party in the streets

In this April 7, 2008 file photo, an estimated 40,000 people celebrate on Massachusetts Street in downtown Lawrence after the Kansas Jayhawks defeated the Memphis Tigers to win the 2008 NCAA National Championship title. 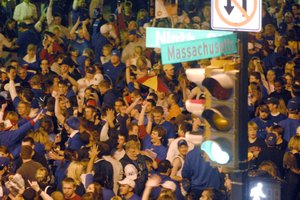 Lawrence Police Chief Tarik Khatib said the city has been planning for weeks, especially for how to manage big crowds during Final Four weekend.

“We want KU to win obviously, but then all the activity takes place in the background as far as making sure we have a very safe environment,” Khatib said.

In 2008, after the Jayhawks defeated the Memphis Tigers in overtime to win the national title, an estimated 40,000 people celebrated on Massachusetts Street. Two nights before that win, a large crowd partied downtown when KU defeated North Carolina to advance to the title game.

No major incidents were reported as part of the 2008 celebrations, and officers were generally friendly with the crowd.

“We don’t want to be so friendly that we’re oblivious to everything that’s going on, but we can be interactive and create a safe environment and try to catch things before they happen,” Khatib said.

Police have been working with downtown bars in recent weeks requesting they serve drinks in plastic cups instead of bottles, which can cause more damage if they’re thrown or if they break.

Mike Milne, general manager of It’s Brothers Bar and Grill, 1105 Mass., said he has stocked up on extra plastic cups in preparation for a Final Four party.

“We’re going to abide by it and try to make their job easier,” he said.

At their meeting Tuesday evening, Lawrence city commissioners will debate a temporary ordinance to prohibit anyone carrying glass bottles or other containers on downtown streets and sidewalks effective Saturday, April 2, through Tuesday, April 5.

Khatib said officers from other area agencies will be available next week to help handle a large celebration.

“Let’s celebrate safely. You don’t have to be inebriated to have a good time,” he said.

While Khatib said the department is not encouraging people to congregate downtown if KU wins Sunday, he said extra officers, including some from Overland Park, will be on duty in case a crowd gathers to celebrate.

A civilized celebration is KEY!!!

Everybody can hit the bernie, inebriated or Not!!!

Let's not count our celebrations and parades before they hatch.

This story is not only premature, it provides bulletin board ammunition for the rams.

I don't think it's too great as bulletin board material. They said they've been planning for weeks on a "just in case" basis.

I'm still upset about the "can ban".

I didn't get to join the party in 2008, but IF we were to win it all this year, when and where does the partty officially start? I mean, are people allowed to go meet up w/ their bus at the Fieldhouse? Where would the team be landing and arriving in Lawrence? Will the whole team hold a parade/rally the next day or day of return to Lawrence? I guess I'll have to call their office, but just curious if anyone remembered any public activities attended by the entire team or part of the team somewhere in Lawrence. curious. thanks.

The parade in 08 was a few days after the win. They will announce it. As far as the party starting, well, it started about 5 am the morning of the game. ;)

Thanks KU sports for the jinx, Don't you think you could wait another 48 hours to post this. You people are slime.

I stand by my words. They could not wait until we actually made it to the final 4. The heading said nothing about if KU made it but assumed they would be there. This shows a complete lack of respect to VCU and has already made it back to the VCU team. Yes VCU has the headline in their locker room. This will not be a easy game and KU sports is giving them additional motivation. I call that slime sorry. All they had to include in the headline is "If KU wins" but now their team has already clipped out the header. Anything can happen in basketball..Bradley, N Iowa, Bucknell, so dont tell me that extra motivation does not help and this site has just handed them that motivation., Thanks

Motivation comes in all forms...that being said why dont you go troll home to your mildcat boards.

I was on campus in 88 during the euphoric outpouring that filled Jayhawk Boulevard. There was minor damage (to trees, mostly), be we were relatively well-behaved. In 2008, friends and I raced from AFH to Mass Street and enjoyed the can't-stop-smiling celebration for several hours. I noticed the dozens of law enforcement officers along the street and was impressed at their friendly, forgiving interaction with crazed (and drunk) fans. I really appreciated them that night.

One of the friends with me came from soccer-crazed Brazil via the University of Indiana. He was amazed at how well-behaved we all were ... he witnessed significant destruction in Bloomington in 2002 after a Final Four win, and again after the championship game loss. Bloomington and IU are very similar to Lawrence and KU in size and attitude, so it made our fun-but-respectable celebration look exceptionally civilized by comparison. Made me proud.

'88 left Kemper after waving bye bye to Billy Tubbs, headed to team hotel hung around front drive way with several hundred fans, including Dave Robisch. While Larry had his lucky Michigan bus driver take the team up the back entrance. '85 held around Dallas Reunion arena after Archie hurt his knee, Danny was freshman and didn't get many touches. Heart break city. '08 Where dreams may come.

If we are fortunate (luck is when hard work meets opportunity) to win three more games, here is where to meet up and party. Near the end of the game where.ever you are, stand and chant in reverence the Chant. Take a moment of silent prayer of thanks for all the players, coaches, "moms" and folks that helped build our tradition. Some famous many that are not. Smile in appreciation for the players and banners to come. Go outside, follow your heart to the lights and big guns, and join the celebration across jayhawk nation.In other words the party and celebration will be easy to find as where you are, it is there deep in your heart. bring it.

Come on, a jinx, really?? Calling people slime?? Come on, this web site deserves better. No such thing as a jinx, our guys just need to take care of business tomorrow.

I was unaware this article said anything about when KU beats VCU, but rather was about the preparations that the Lawrence police are making to handle the crowds on Mass. in the event that KU does reach the Final Four which wouldn't exactly be the most shocking thing to ever happen.

So everything went very well without major incidents in 2008 so what does the liberal Lawrence council decide... "Lets make a new law!"

Typical liberals... Fix something that isn't broken until it breaks.

Sounds like the Police at least get it... good job folks!

Classy - turn an experience that unites Jayhawk fans into something divisive and silly. I guess that's why your game analysis is so insightful: "let's just win!"

"While Khatib said the department is not encouraging people to congregate downtown if KU wins Sunday, he said extra officers, including some from Overland Park, will be on duty in case a crowd gathers to celebrate."

ARE YOU KIDDING ME... give KU fans (mainly students) a little more credit than that.. we wont be down celebrating on the streets if we win sunday... we are better than that.. we expect to make it to the final four... its when we win the final four game that we will be down taking over mass street... BE READY FOR TWO OF THE GREATEST PARTIES OF ALL TIME!! REPEAT OF 2008!! and if the city was smart they would allow open containers on mass during the final four and championship games.. cuz its going to happen anyways...

we wont be down celebrating on the streets if we win sunday...< That's not true. In 2008, after defeating Davidson, many, many people went flooding into the streets in celebration. Obviously, there were significantly less people than against UNC and Memphis, but still—we still walked the roads.

Anyway. Maybe recycling bins can be placed block by block for all the extra cans and plastic that will be undoubtedly be used in case KU wins.

Couldn't this article have waited to run until tomorrow's paper? Look how stupid it looks in retrospect...

I said this yesterday. They used this as motivation. Thanks alot George! You could not have waited 48 hours to post your !$!$ article. It sucked anyway. Go to hell I will never read another article from you every again!