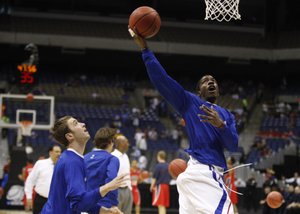 “I just wanted to come off the bench and use my energy and go after every ball, and it happened to go in my favor tonight,” Robinson said.

“I think coming out and defending first of all gives us a lot of energy, and then on the offensive end we were hitting shots,” Morningstar said.

KU held Richmond to 33.8 percent shooting for the game. The Spiders hit four of 26 threes.

“I thought our guys for the most part followed the scout report great. Our ball screen defense was good,” KU coach Bill Self said. “And they usually can score behind their ball screens or behind their dribble handoffs, and that wasn’t the case tonight. Our goal was to take away layups and threes, and they got the one back or maybe two. And that was late.

“Our scout team is pretty good. And I think that was a big reason why our guys felt comfortable with their actions. Preparation was good in large part due to our scout team.”

“That's coach Pitino’s opinion. And, not to be disrespectful or anything, but we're still playing,” Markieff said. “And we have killer instinct. We definitely want to try to beat everybody like we did today. When we got them down early, we kept them down.”

KU went more than 10 minutes the first half without a Morris twin scoring, yet built a 20-point lead.

“I thought Thomas (Robinson) was great,” Self said. “Markieff struggled basically the whole night and got two quick ones (fouls) early and took him out of it and wasn’t a major factor offensively. But Marcus is still going to be the guy most teams key on to stop. He can pass, and Markieff can pass, and Thomas was effective and Josh (Selby) made the two threes (back to back in first half). Tyrel (Reed) and Brady combined for four the first half. That was a great start for us when we see the ball go in the hole. I thought Tyshawn (Taylor) was great. I thought his dribble penetration set up a lot of things for us.”

Close call in the hall

Self was asked if it was “somewhat odd” that, in a big football stadium, both teams entered the court through the same hallway. The Jayhawks and Spiders barked at each other before the game when Richmond’s players were blocking the Jayhawks’ way to the court.

“Maybe. I don’t know,” Self said. “Those are things I don’t really think about a lot of that stuff. Maybe a little odd, but certainly not a big deal. There was nothing. And my guys said, ‘Coach, that was nothing.’ I thought both teams played with great respect for each other tonight.”

KU senior Reed now has 132 victories in a KU uniform and on Sunday can tie Duke’s Shane Battier as winningest four-year college player of all-time. Battier won 133 games from 1998-2001. Reed, who has lost just 16 games in four years, has tied four Kentucky players (Scott Padgett and Wayne Turner, 1995-98; Jeff Sheppard and Allen Edwards, 1996-99) for second on the all-time win list.

KU spent the second-most money of any public university on basketball recruiting last year, Bloomberg.com reports. Kentucky spent $434,095 in fiscal 2010. KU was second with $419,228, and Florida third with $326,306, according to expense reports from 53 schools obtained through open-records requests. Private schools such as Duke aren’t required to divulge the information. Wisconsin spent the least ($57,397) on recruiting of public universities in the six biggest conferences cited: the Big Ten, Big 12, Big East, Southeastern, Atlantic Coast and Pac-10.

KU, 35-2, has tied for second-most season victories in school history. ... Kansas advanced to the Elite Eight for the 20th time in school history. ... KU is 19-8 in the Sweet 16 and 27-8 as a No. 1 seed. ... Kansas has won 11 straight games. ... Morningstar scored a team-high 18 points, which was one off his season-high of 19 at Nebraska on Feb. 5. It was his ninth game of the season in double-figures and the 16th time he had done so in his career. It was the second time of his career to lead KU in scoring. ... Morningstar’s seven made field goals tied his career high, also done vs. Coppin State on Nov. 28, 2008. ... Taylor dished seven assists to up his season total to 161 and tie Sherron Collins (2010) and Russell Robinson (2007) for 21st place on the KU single season list. ... Taylor had a career-high tying two blocked shots. He has done it two other times including against Colorado State this season. ... Kansas, which averages a nation-best 17.9 assists, dished 20 assists against Richmond. It was the 13th time this season the Jayhawks had 20 or more dimes.

Just about everything Pitino says makes him look like a fool. He's a great, legendary coach, but really has no business analyzing these games. I understand why CBS invited him to be on their panel, but he's been wrong more than he's been right. That being said, I hope he picks VCU.

I think Pitino should worry about the killer instinct of his own team. That's why he is doing commentary and not coaching. F.O.E.!

Rick Pitino's judgement... hummmm, he picked a crazy blonde over his own wife once. Guess that pick didn't turn out so bad.

Didn't he also guarantee there would be two Big East teams in the Final Four? Man, his brackets must be horrible...

But on the subject of CBS, re: Tyrel's winning accomplishments, I noticed that at the beginning of the OSU v UK game CBS put up a graphic and the announcer proclaimed that one of OSU's seniors had won 127 games in his career and was "the winningest active player in college basketball." What BS. I'm sure it was just laziness on their part. I imagine them thinking, "127 wins? that's like an average of more than 30 a season, that's gotta be the most!" Sorry guys, KU has had some consistent success, too.

Thanks for the bulletin board material, Pitino. Too bad your team isn't around anymore so KU could drop 150 on you again.