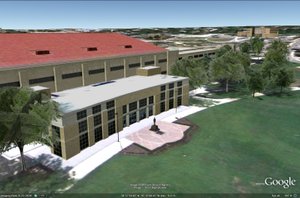 And as the gates open, he fell to his knees and he knew he had arrived.

I believe these programers should have the hallowed and at times haunting chant of "Rooooooocccckkkkk Chhhhhhaaaalllkkkkkk JaaaaaaaayyyyyyHaaaaaaawwwwk K U!" being played as the doors open to the field house and don't stop until one leaves it and the doors close behind them.

When he knew he was there he looked up from his knees and saw a a sign through the bright light that read, "Pay heed, to all that enter; Be aware of The Phog!" and a tear ran from his eye.

You got the words wrong! It says "BEWARE of the Phog", not "be aware". Goodness! In other words, "Be afraid of the Phog" not, "Notice the Phog".

Sorry about that, just a typo, but I think you still got the point. If we were all perfect then what fun would message boards be?

Little wonder that the Jayhawk Nation overflows with followers. Just imagine, all those Lawrence kids who once garnered the golden offering of entering The Phog 10 times per season at a buck per session! Backdrop for an exciting documentary.

well this explains why google earth centers on Lawrence as the default when you open it. if you open it up and just zoom in you get to Lawrence. :)

True! Even further, McClendon lived at Meadowbrook Apartments - ergo, not only Lawrence, but Meadowbrook is the center of the known universe. My wife worked there when photographers from Google came in and asked "Can we climb around on some of the rooftops and take pictures?" A hefty Rock Chalk to McClendon & Co. on including the absolute best hardwood haven in college basketball in more detailed form.

You very well could have come up with the solution that fits all variables.

Build a small high security "structure" that is epic, inside the fieldhouse (I'm thinking a very small version of the Parthenon).

Now there's two smithsonian buildings a prospective thief has to deal with along with tons of security cameras & security officers, some of which are already employed there anyway.

Perhaps only 10 can fit to see the document at a time.

But since the Fieldhouse was originally supposed to be named after Naismith, & Lawrence was his first choice for a Basketball Hall of Fame, you have the perfect solution:

Hopefully there will be a public forum on this topic at some point.

Will google earth take us into the locker rooms?

As a totally silly aside -- He paid too much for his tickets. As recently as the late 70s, students in K-12 could purchase a six-game KUBB (KU Basketball Booster) ticket for $1. Non-sellout games that weren't part of the KUBB six pack, we youngsters could buy single game GA tickets for $1. Many years, K-State was the only sellout, and that was several times by the K-State pep band and cheerleaders taking up seats in OUR arena. Seriously.

In other words, current and future students, enjoy this and don't ever take AFH for granted.

I'm glad they haven't updated Columbia, nothing worth seeing there anyway.

Soon, even our colons will be on Google Earth.

There will have to be some serious discussions going on when the guys in that Google van drop by for those pics.

OK, I zoomed down on it, had the 3d button checked but couldn't get inside the building. What gives?

Jaybate we've already seen inside your brain on KUSports.com.

READ the article! It says, very clearly, "Next week Google Earth WILL open the doors on its virtual Allen Fieldhouse....." NEXT WEEK. Not today.

Thanks, but I was confused because the buildings next door you can get inside. I have a reputation for not reading completely!