Keegan: What a sweet day for KU athletics

Kansas took down Illinois on Sunday, March 20, 2011 in Tulsa, Okla. to advance to the Sweet Sixteen. 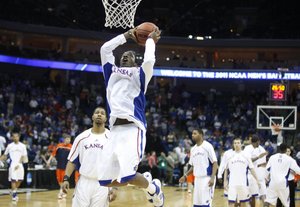 Kansas coach Bill Self talks to reporters following the Jayhawks' 73-59 victory over Illinois on March 20, 2011.

Tulsa, Okla. — Of all the players in college basketball and all the games shown on television this year from which he could choose, Kansas University guard Elijah Johnson probably watched more minutes played by Illinois’ senior Demetri McCamey than anyone.

Johnson’s familiarity with McCamey’s game paid off big-time Sunday at the BOK Center, where KU knocked off Illinois, 73-59, and advanced to the Sweet 16.

Two nights after watching the rugged, 6-foot-3, 200-pound guard torch UNLV for 17 points and seven assists on 7-of-13 shooting, Kansas held McCamey to six points on 2-of-9 shooting in 36 minutes. His final bucket came on a layup with 2:15 to play and Kansas leading 66-51.

“That was the key for us. Definitely defensively,” said junior guard Tyshawn Taylor, who drew the defensive assignment from the jump. “Cut the head off, and the rest of the body follows. He’s the key to their team, and that’s what we had to do.”

Early on, Taylor used length and quickness to frustrate McCamey and keep him from being much of a factor. But two first-half fouls sent Taylor to the bench. That’s when Johnson got his shot to pick up where Taylor left off.

“Tyshawn did a great job on him to start, and then he got in foul trouble, and I told him, ‘Just because you’re in foul trouble ... he’s gotta deal with another problem,’” Johnson said.

That problem was Johnson, who hit McCamey with a dose of toughness that added to the toll Taylor’s quickness, length and athleticism already had taken.

Johnson first checked in with 14:19 remaining in the first half. He didn’t check out until the clock showed 1:50. Even then, Johnson only sat for 40 seconds, checking back in at the 1:10 mark to finish the half.

“I watched him a whole lot this year, every chance I got,” Johnson said of McCamey. “I just watched him and learned. He’s good. He can teach you just from watching him on TV. So when I heard that I was going to get a chance to play him, I was so psyched about it. I was looking forward to it.”

Although Johnson and Taylor were given the bulk of the credit for slowing down the Illini’s leading scorer, McCamey said the credit belonged elsewhere.

“I don’t think it was just two guys,” McCamey said. “Their whole team played great defense, and they collapsed on me every time I tried to get into the paint.”

The key, Johnson and Taylor said, was staying in front of McCamey and not allowing him to play games with them.

“He’s so crafty with the ball, and he can make some good fakes, so the key was just to stay down and be a solid defender,” Taylor said.

Added Johnson: “We didn’t want to let him get too comfortable. After a while, he wasn’t into it too much, and that’s when we had to turn it up even more.”

In reality, the two KU guards had the defensive dial cranked all the way to the right from the opening tip, something that did not go unnoticed.

I'm not a big TT fan. I think he was lazy and careless with the ball most of the season. But he has been slowly winning me over since his suspension. I think EJ is amazing on D..

Matt, Illinois is UI not IU. IU is Indiana. It's as insulting to them as people calling us UK.

As to seeding, we have already played the best seed we can play in the region (Illinois #9) with #10 (Florida State), #12 (Richmond) and #11 VCU remaining. But VCU is playing way above expectations and dominating all three previous opponents. Richmond and Florida State are tough match-ups as well. I don't think seeding matters now.

Our guards need to keep up that defensive intensity for our next match-up with Richmond. All the talk on ESPN last night was about how great their guard was and how shaky our guards play on the defensive end. Use that for motivation, and cut the head off the Spiders and the rest will die with it. Great to win 2, but we want 6. Rock Chalk Jayhawk!

TT has been playing like a stud since his return. When he is not handling the ball we aren't as good of a team. Keep it up Taylor.

What keeps cracking me up is people needing to label Tyshawn and EJ differently.

Tyshawn has "length, quickness and athleticism."

And EJ has, well, he has side to side, as Coach Self said awhile back now.

But no one is quite sure what "side to side" means.

Let's set "side to side" aside awhile.

EJ is longer than Tyshawn.

EJ has all the athleticism Tyshawn has.

But leave us be clear about this: both these guys are faster than most of they guys the meet.

It took EJ awhile longer to turn ballistics into effective speed on wood, but now that he has done it, Self gets to choose: do I want a weaponized laser traveling at 186,000 miles per second, for this particular hostile engagement, or do I want a .220 Swift going 1420 meters per second.

The Swift tears holes through things and stops them with extreme prejudice as the spooks used to say, until Hollywood got hold of the term.

Either way, to the naked eye and to the opposing defender, both guys present effectively the same problems, while one burns through you and the other stops you dead.

KU has grown from having a problematic point guard position to having a wonderful problem of trying to find out how to use both guys to best effect in series.

Tyshawn and Elijah playing very well makes us scary good. Brady and Reed didn't shoot great so glad to get behind us. Have fun, enjoy every possession.