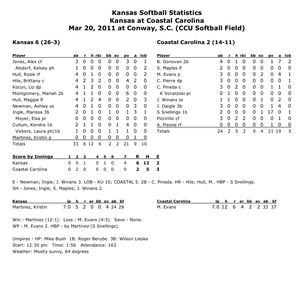 Conway, S.C. — Tied through six innings, Kansas University loaded the bases in the top of the seventh, and sophomore Maggie Hull launched a grand slam to lift the Jayhawks to a 6-2 softball victory over Coastal Carolina on Sunday.

Kansas concluded the weekend a perfect 5-0 to win the Chanticleer Classic, its fifth pre-conference tournament title this season. KU also extended an 11-game winning streak as it improved to 26-3 overall.

“I am really proud of the way we played this weekend,” KU coach Megan Smith said. “We were definitely tested, and our girls battled and did extremely well. I think Maggie Hull had an unbelievable weekend at the plate so we’re really proud of her and we’re really excited to start Big 12 play Wednesday.”

Hull led Kansas with a .438 batting average (7-for-16) during the tournament, including two home runs and two doubles to help bring in a team-high seven RBIs.

KU found itself trailing after an error in the bottom of the second inning scored two unearned Coastal runs.

Senior Brittany Hile was responsible for tying the game as she batted in a run in the third and fifth innings. Her single up the middle in the third frame plated Kendra Cullum, while her leadoff homer in the fifth knotted the score at 2-all. The round-tripper was her team-high 10th home run of the season.

Hile finished 3-for-4, while Liz Kocon and Maggie Hull added two hits apiece as KU outhit the Chanticleers, 12-5. Hull’s home run marked her second grand slam of the season and the team’s sixth.

Freshman pitcher Kristin Martinez collected the win, improving to 12-1 with her seventh complete game. The lefty hurler gave up no walks in the outing and added four strikeouts as she improved her ERA to a team-best 1.63.

Kansas is back in action for its home and Big 12 Conference opener on Wednesday versus Missouri. The doubleheader is scheduled to begin at 3 p.m.