Kansas guard Tyshawn Taylor talks with media members about his thoughts on defending the Illinois guards on Saturday, March 19, 2011 at the BOK Center in Tulsa. 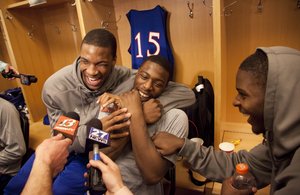 Tulsa, Okla. — With 8:06 left in the second half of Friday’s game against Boston University, Kansas University guard Tyshawn Taylor came around a ball screen and found himself wide-open.

Taylor admits one or two years ago, he probably would have passed up the open three-pointer.

“I never felt like I was a bad shooter,” Taylor said. “I just wasn’t shooting the ball with confidence.”

On this occasion, Taylor stepped into the three-pointer and swished it, contributing to a 13-2 KU run.

The junior point guard hasn’t been hesitant to put up deep shots lately. In his last seven games, he has combined to go 8-for-14 (57.1 percent) from three-point range.

His season three-point percentage is up to 39.1 percent after shooting 33.9 percent a year ago.

Taylor said he’s always been told by KU coach Bill Self to shoot it when he’s open.

When he misses threes, Taylor said there’s usually a cause. He’s either rushing his shot, fading away, not holding his follow-through or watching the ball instead of focusing on the rim.

Through repetition in practice, he has found a comfort level. It also has helped that he has become accustomed to a new way of shooting.

Over the summer, Taylor dislocated his right ring finger while pushing a player on defense at the Adidas Nations Experience in Chicago.

After he returned to Lawrence, the finger continued to pop out of place, usually when he reached for steals. Taylor dislocated it again during an early KU practice, and since then he has been taping his middle and ring fingers together for practices and games.

“It doesn’t really affect me playing,” Taylor said. “It hurts sometimes, and it’s annoying. It’s more of an annoying pain, like I wish I didn’t have to do this.”

The knuckle on Taylor’s ring finger remains swollen, and though he says he doesn’t feel any soreness while he’s playing because of adrenaline, often he feels a sharp pain in his knuckle immediately after games.

There are also times the finger locks up on him postgame. Taylor said that KU trainer Bill Cowgill has told him there’s a possibility he might need surgery after the season to repair ligament tears.

Taylor had to change his shooting form over time because he felt like, with his fingers taped, he wasn’t getting enough rotation on his shots.

“You’re supposed to use your fingertips to shoot, to pass, to dribble,” Taylor said, “and I’m using my palm for a lot of stuff that people use their fingertips for.”

After a season with the new technique, Taylor has conditioned himself to guide his shot with his index finger.

When he hits threes, KU’s offense becomes even more dangerous.

Oftentimes, Taylor is left open on the perimeter when his defender leaves to help guard Marcus or Markieff Morris in the paint.

Also, when Taylor makes his outside shots, defenders have to come out farther from the basket to guard him, which opens up driving lanes.

“I get a lot of those (three-point) shots,” Taylor said. “I’ve just got to be able to step up and make them.”

"When he hits threes, KU’s offense becomes even more dangerous."

well, he'll have to make those against the Sucking Illinniiii..

Talk about getting better.

And with a hand that needs surgery?

Tyshawn has crossed the stud frontier.

Very nice and informative article - thanks!

Key words from above: "Found himself wide open." TT just shouldn't try for a three everytime he has the ball. We have excellent 3 point shooters in Tyrel and Brady. (and Selby, Releford and Little are all capable), who should shoulder the load when it comes to 3's. But, as the article says, if the defense sags off to guard the middle, it opens it up more for TT, for the 3 or to drive.

Keep playing smart, TT. Continue keeping the turnovers down, and keep driving when you have an open lane. This tourney is ours for the asking.

Well said. As the PG, TT's primary focus should be to pass, not shoot. That can be from out front or by driving and dishing. He should go to the basket when he can go all the way, but not fall in love with the floater when he has to pull up short. That is a very difficult, low % shot which he rarely hits.

Tyshawn Taylor making 3's and getting to the rim makes us even more dangerous. As long as he takes care of the ball and gets everyone involved we will be just fine.

Pretty much as Tayor goes, so go the Jaybirds.

Keep it up Tyshawn. This is the best time of the year to be confident. I've posted plenty of gripes about Tyshawn and I think they are all legit. Most of us can see TT is extremely physically gifted. Given the combination of his freakish physical abilities with the years of experience, I've expected a greater performance this year than he's given. Stay focused, have a great tourney and all earlier blunders will be forgotten.

This team is so deep and talented though that I totally disagree with globaljaybird's comment. While every team would benefit from having a TT at his best, we're plenty capable of winning this tourney without him. Subtract the twins from this team and we have a real problem.

We know what you're capable of TT, play smart and get it done.

For my least favorite player most of the season, I am in awe of what Tyshawn has done turning around his abilities and making himself utterly indispensable to this team. He's starting with absolute honor now, and today's the level-best day of them all to keep it up. I am fully, completely, irretrievably, and unconditionally rooting for Tyshawn with all the other 'Hawks today because he has more-than-earned it. Have some fun out there Tyshawn, take care of the ball for everyone, and if you could go even one further and stop launching the offense with a one-handed scoop pass, I'd be behind you for Most Improved Player in the History of the Universe.

After the W against Illinois, he must realize if he just plays within himself, we will be in the championship game...and you can write that down. San Antonio we're takin' the town again!

Tyshawn reminds me of Aaron Miles in his senior year. You might not draw up a play for him behind the 3 point line, but as long as his feet are set when the ball rotates to him, he has a pretty good shot. His tempo on offense is what we needed today.