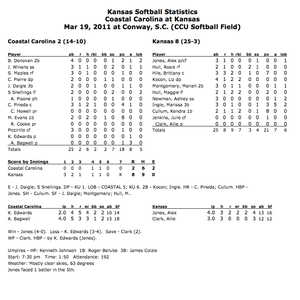 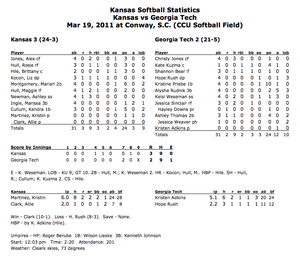 Senior Brittany Hile scored three times and was one of three Jayhawks with two hits as the Kansas University softball team defeated Coastal Carolina, 8-2, Saturday night to improve to 4-0 during the Chanticleer Classic.

KU, which is riding a 10-game winning streak, defeated Georgia Tech, 3-2, in eight innings earlier in the day.

Junior Liz Kocon and sophomore Maggie Hull tallied two hits and two RBIs each, while freshman Kendra Cullum also batted in a pair of runs for the Jayhawks.

Kansas got off to a quick start, scoring three runs in the opening inning on a sacrifice fly from Hull and then taking advantage of two CCU errors later in the frame.

The Jayhawks didn’t slow down and collected three more runs on three hits over the next two innings to push their advantage to 6-0.

Coastal Carolina finally scored in the top of the fourth inning with a sacrifice fly, the same strategy Kansas used in the bottom of the fourth as Hull drove in the Jayhawks’ seventh run with a deep fly ball to right field.

Both teams added one more run in the next inning. The Chanticleers led off the top of the fifth with a home run, while Cullum answered back with a solo shot of her own in the bottom of the frame, her second home run of the season.

Sophomore starter Alex Jones improved to 4-0 from the circle. Through the first four innings, Jones struck out four batters and gave up three of CCU’s six hits and both runs. Senior Allie Clark picked up her second save of the year, closing out the final three innings for the Jayhawks and adding three strikeouts.

In the first game, Hull’s leadoff home run in the top of the eighth inning broke a 2-2 tie to lift KU to the win and spoil Georgia Tech’s 14-game winning streak.

The Jayhawks held a 2-0 lead until the Yellow Jackets (21-5) rallied to knot the score in the bottom of the seventh inning and force an extra frame. Hull quickly gave KU back the advantage as her leadoff shot in the eighth inning to center field sailed over the fence. It marked her fourth home run of the season.

Clark struck out the first GT batter in the bottom of the eighth before forcing a foul fly to Rosie Hull in left field and an easy grounder to Cullum at first to end the game.

Clark entered the game in the seventh inning for freshman starter Kristin Martinez and held Georgia Tech to one hit over the final two frames and fanned two batters as she improved to 10-1. Martinez tossed six strong innings for the Jayhawks despite giving up both of the Yellow Jackets runs.

Kansas will wrap up the weekend at 11 a.m. today when it takes on Coastal Carolina again.