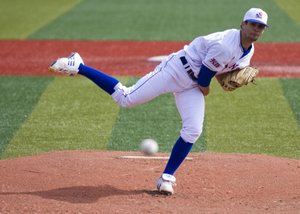 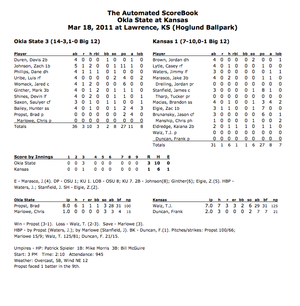 The Cowboys won their eighth straight game and improved to 14-3. The Jayhawks fell to 7-10.

OSU sealed the victory when third baseman Mark Ginther blasted a two-run double in the top of the fourth inning.

Despite trailing most of the day, Kansas had an opportunity to come back in the final inning. Marasco led off the ninth with a single to right, then designated hitter James Stanfield was hit by a pitch.

However, OSU closer Chris Marlowe entered the game and struck out Brandon Macias, Zac Elgie and Chris Manship in succession. Marlowe registered his third save. Brad Propst (3-1) earned the victory for OSU.

“We just have to keep grinding,” KU coach Ritch Price said. “We had opportunities to score, and we couldn’t get that clutch hit. It’s kind of contagious. When you can get that first one, you have a chance to get that second or third one. We have to stay positive and hope our guys keep getting better.”

“I think he did a really nice job of locating his pitches (later in game),” Price said of Walz. “He used both sides of the plate and was down in the zone. He mixed in his breaking ball and his changeup.”

The Jayhawks scored their only run in the fourth on a leadoff double by Zac Elgie, who came around to score on an RBI ground out by Kaiana Eldredge.

KU and OSU will play again at 1 p.m. today at Hoglund Ballpark.