Kansas forward Marcus Morris watches the Kentucky Princeton game as his brother Markieff Morris takes questions from media members in the locker room during a day of practices and press conferences for teams playing second and third round games in Tulsa on Thursday, March 17, 2011 at the BOK Center. 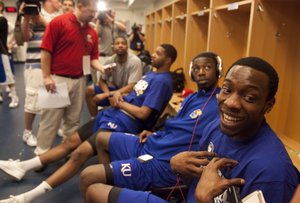 Tulsa, Okla. — It’s a simple task in terms of instruction and far more difficult in its execution.

This week in practice, Boston University forwards Chris Kurz and Jeff Pelage were asked to emulate Kansas University’s Morris twins, Marcus and Markieff, in preparation for tonight’s meeting with Kansas in the first round of the NCAA Tournament.

The reports on how they looked varied, but both took the challenge of impersonating the potential first-round NBA Draft picks with equal doses of intensity and pleasure.

“It’s a great challenge to try to simulate the Morris twins in practice,” BU coach Patrick Chambers said. “They did the best they could, though. I give them a lot of credit. They had some fun with it, but they definitely competed.”

Though playing like KU’s All-Big 12 twins was tough, it came easier for Kurz, a 6-foot-8, 210-pound forward, because of where he grew up.

“I played against them all throughout high school and AAU,” said Kurz, one of four Philly natives on BU’s roster. “Actually, a bunch of us went out to this camp in Atlanta, Ga., and I got to know Marcus and Markieff a little bit there. We had a great time.”

Knowing them is one thing. Playing like them is another. So how did Kurz draw the assignment of spinning and soaring, shooting and scoring like Marcus Morris, his potential All-American counterpart?

“Well, because I’m big and I have a few guard skills, too,” he said. “Obviously, I’m not the player that he is, but I just tried to do as much as I could in the high post, with the high-lows, just tried to do all I could to help this team get ready.”

According to teammates, Kurz handled the chore admirably.

“He doesn’t give himself much credit, but I thought he did a great job of imitating the types of things we’ll be exposed to, what types of moves he might make, his tendencies,” said junior center Jeff Pelage, who played the role of Markieff. “He really studied him and looked at his game, and I think he did a great job.”

That’s the consensus opinion of BU’s Philly guys — which includes Chambers — when talking about the Morris twins.

When not matched up with them in the NCAA Tournament, Kurz said he found himself cheering for Kansas often, just the way he does with the dozen or so other college players he knows who call Philadelphia home.

“I think us Philly guys, we really try to root for each other,” he said.

Added forward Travis Robinson, a freshman from Friends Central High in Philly: “All the guys in Philly pretty much played together at one point or another. Everyone that plays basketball knows each other. It’s a big city, but, basketball-wise, it feels small.”

Like Kurz and the rest of the Terriers’ locker room, BU’s “T-Rob” had nothing but praise for his hometown brethren.

“I always knew the twins from rec leagues, other leagues, AAU tournaments, so I’m pretty familiar with them,” Robinson said. “I must say they’ve gotten a lot better. And they’ve definitely done a great job of representing Philly. Toughness, heart and loyalty to the city.”