Yawn: Duke gets another No. 1 seed 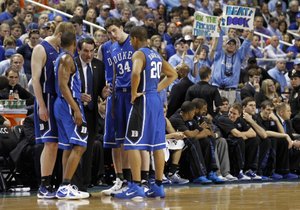 Coach Mike Krzyzewski, center, Directs the Blue Devils against North Carolina in the championship game of the 2011 ACC tournament in Greensboro, N.C.

Duke at a glance

NCAA Tourney matchup: No. 16 Hampton on Friday in Charlotte.

Sunday evening, just hours after knocking off North Carolina for the ACC tournament title, the Duke Blue Devils learned they would be a No. 1 seed in this year’s NCAA Tournament.

For starters, Duke (30-4) entered the 2010-11 season as the top-ranked team in college basketball. What’s more, Duke tipped off the season as the defending national champs and, without question, one of the most complete teams in the country.

But then sensational freshman Kyrie Irving was lost for the season, and the Blue Devils started to look a little more ordinary than they did out of the gate.

Of course, ordinary is hardly the word to describe a team that just earned its 12th No. 1 seed all-time — second only to North Carolina’s 13 — and 10th in the last 14 seasons. Many believe Duke played its way into the top-seed by winning the ACC Tournament. Doing so didn’t exactly do them any favors, though, as the Blue Devils appear to be the final No. 1 seed in this year’s field and therefore were shipped to the West Regional, where they’ll have to go through Anaheim, Calif., to get to the Final Four.

That’s no problem, according to the players.

Led by some of the same names that guided coach Mike Krzyzewski’s squad to the 2010 title, Duke is one of the most experienced teams in the field.

Seniors Kyle Singler (17.3 points per game) and Nolan Smith (21.3 ppg) are as good as it gets on the offensive end, and both possess a variety of skills that allow them to score in many different ways. In addition to their top-of-the-line stars, the Blue Devils are backed by sharp-shooting youngsters Seth Curry (9.4) and Andre Dawkins (7.9), as well as the strong interior play of the Plumlee brothers, Mason and Miles.

Still, while all of those supporting players have had their moments to shine, the Blue Devils often go only as far as Smith and Singler take them.

“They’ve just had a nice, steady progression,” coach K said of his stars. “I mean, Kyle has been good, really good, the whole time. But his last two years, he’s become a guy who will be a pro player. Nolan has become a pro player this year. You never know if that will happen, and you hope that it will. But they’ve just continually worked at it.”

Both players are more than scorers, and both are willing not only to defer to others but also to hand off the big moment to teammates if it helps the Blue Devils win.

“I think he's a perfect example of someone, if you keep your mind open, you can learn from anybody,” Krzyzewski said. “Nolan is open to learning. I'm impressed with that. From his freshman year to now, Nolan’s probably progressed more than any player we’ve had here. He’s a player-of-the-year candidate, and rightfully so.”

Throughout the years, Duke has fared well in the ACC Tournament, just as it did this season. There’s a reason for that.

“We don’t talk about the NCAA Tournament or anything like that,” Krzyzewski said after the ACC title game. “We just say we want to win this tournament. You could see how happy we are.”

Now the happiness shifts to the Big Dance, and Duke appears ready.

“We use this week to work on ourselves,” Krzyzewski said prior to the conference tournament. “We’re on spring break. The guys can get in extra shooting. We really focus on us. That’s how we’ve tried to do it (and) it’s worked out fairly well going into the NCAA tournament.”