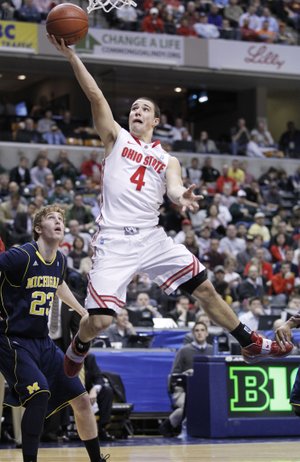 Ohio State guard Aaron Craft (4) goes up for a layup in the first half of a Big Ten tournament game against Michigan.

Ohio State at a glance

All season, the talk regarding the Ohio State University men’s basketball program was about surprise freshman Jared Sullinger, his mammoth size and potential to be the national player of the year.

But Sullinger, the 6-foot-9, 280-pound power forward from Columbus, Ohio, is not the only reason the Buckeyes enter this year’s tournament as one of the top seeds and with a legitimate chance at winning it all. In fact, there’s actually another impact freshman on the team, who’s also from Ohio who also has helped make the Buckeyes go.

His name is Aaron Craft, a point guard from Findlay, Ohio, and, in almost every way, he is the visual opposite of the Buckeyes’ big man. Craft stands just a shade over 6-1 and weighs 195 pounds. He plays outside and does it well enough to lead OSU in assists (150), steals (65) and — get this — personal fouls (92).

Here’s the catch: While Sullinger has done his damage — 17.4 points and 10 rebounds per game — by starting every game this season, Craft has started just once. Still, together, the dynamic freshmen have taken Ohio State from a team that was considered very good and transformed it into one that could be considered great.

“Thirty-two games into it, they’re pretty accustomed to just about anything that we can see,” OSU coach Thad Matta said of the two freshmen prior to tipoff in last weekend’s Big Ten championship game. “Dating back to the first road game we played at Florida, from that point on, it has been just incredible environments, and these guys have had great poise and great composure.”

Perhaps that explains how the duo has been able to perform so well while carrying the burden of being the No. 1 team in the nation and, undoubtedly, taking every team’s best shot every time they step on the floor.

However, Matta offered up a slightly different reason for the success of his youngest players, and it had to do with things that happened long before either arrived on OSU’s campus.

“You know, both guys won a ton of games throughout their high school career, as well,” Matta said.

To say that Ohio State (31-2 overall and dual champs of the Big Ten) has done what it has done this season on the strength of two stellar freshmen would be unfair. There are others on this team. Others with experience. Others with talent. Others with an understanding of what it takes to play — and succeed — at college basketball’s highest level. A lot of the attention may go to Sullinger and Craft, but neither carries himself like a superstar. And both have appreciated how much those “others” have helped them adjust.

“I’ve definitely benefited from having the coaching staff we have and the seniors we have,” Craft said. “They’ve always been there no matter if we’re up, no matter if we’re down, in practice or in games. So I think that’s definitely a thing people take for granted is the leaders you have on your team and just on and off the court trying to get you ready.”

Matta’s well aware of how important his upperclassmen have been to what Ohio State has accomplished. But, in addition to the impressive steps the two freshmen have taken as players, he’s also seen them mature as leaders in their own right.

“With these two guys and what the upperclassmen have done in terms of kind of teaching them the ropes,” Matta said, “they’ve had some games throughout the course of the season where they’ve done that.”