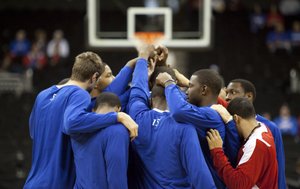 Fans in Sprint Center chanted “One More Year” as the Morris twins clipped the nets after Saturday’s Big 12 tournament title win over Texas.

“I mean, it’s definitely nice to know people want us to come back,” Marcus said. “We’ve not made that decision, not thought about that decision (to possibly turn pro). I grinned knowing they want me back. They are special fans.”

Noted Markieff: “I definitely heard it. It definitely sunk in. We’ll just see what happens.”

Tyshawn Taylor, who scored a season-high 20 points after returning to the starting lineup, had a funny line on the court after the game.

“I’m back. The Ferrari is back,” Taylor said of one of his nicknames. He’d just been congratulated by coach Bill Self, who told junior combo guard Taylor he’d played his best game since he’d been in college.

KU’s Marcus Morris and Markieff Morris were joined on the all-tourney team by Texas’ Jordan Hamilton and Tristan Thompson and Colorado’s Alec Burks.

Today is NCAA Tournament Selection Sunday. CBS will reveal the bracket from 5 to 6 p.m.

“I think Texas should be a No. 2 seed. I think they had that locked up before the game. I think we are a No. 1, and that was locked up before the game. I think today’s game was for pride,” Self said. “I’ll tell you this: This tournament wouldn’t mean as much if it ended Sunday with so much going on. The conference moving it to Saturday is great for the players. This is their day to enjoy this tournament.”

Of Selection Sunday, Self said: “I want there to be a little day of celebration being in the tournament. We should never take it for granted.”

Self was asked how he could best motivate his team for the NCAAs. “Maybe we’ll draw Northern Iowa. That would probably do it,” Self joked of KU’s loss last season in the second round.

Self was asked about Markieff Morris apparently running into Texas’ players in an arena hall Friday night and informing the Longhorns the Jayhawks wanted them in the final.

“You know what, there’s probably some Texas guys saying stuff to our guys, too. These guys know each other, text each other all the time. That kind of stuff can be done in fun,” Self said. “That doesn’t bother me. These kids know each other from back playing AAU.”

Thomas Robinson was hit with a technical foul late in the first half after a Tyshawn Taylor dunk.

“I was just shouting,” Robinson said. “I screamed, ‘Let’s go.’ The refs gave us a warning earlier. It was a good call. I deserved it after that.”

Self on Tyrel Reed’s vicious one-handed dunk. “It’s his first dunk he’s had since he’s been here. He’s a two-foot jumper. He got it off one-foot. It’s fitting it came today.”

KU has 32 victories for the fourth time in the last five seasons. ... KU won its eighth Big 12 Championship title and 12th overall conference tourney postseason title. ... KU is 12-5 in tourney title games. ... KU is 18-7 against Texas all-time. ... KU finished with six players in double figures for the third time this season. KU is now 3-0 when six players score 10 or more points. The entire starting five recorded 10 or more points in addition to sophomore forward Robinson off the bench. ... KU’s 48 first-half points were the most scored by a Texas opponent in the opening frame this season.

Welcome back to Jayhawk-ville Walt Wesley!!!!!!!!!

Coach Self owns Coach Barnes, for both regular seasons's championships & Big 12 Tourney Championships. McDonald All Americans don't mean a thing when they're up against Self and the Hawks.

Revenge is sweet. Especially when it's broadcast nationally.

With TRob at full strength, the Hawks are unbeaten this year. Did I see TRob & the twins all in the game together for a while? Or did I just imagine it? Maybe I was seeing triplets.

Loved the shorthorn steaks on the barbie for dinner. Buurrppp. Ate five helpings, and I think they gave me gas.

Congratulations to the Twins for the all tourney selections. Is anyone surprised? Anyone care for some M&M's to celebrate?

Was slightly worried about the hallway bantering, that it might give bulletin board ammo to Texas, but I think it worked in reverse. Texas thought the Hawks were just being cockey. LOL

1 in Southwest Region. Oh, yes. They can't take that away from the Hawks.

Send the Horns to the Big East champion's region, and K State to the ACC championship region. Knock each of those two conference champions out before they even reach the Final Four. Send the second place team from each to the Southwest. The Hawks can handle two a time.

The Jayhawks deserve more than 1/2 of the #1 votes in the final regular season poll on Monday.

The twins have already earned the right to enter the NBA early. The Jayhawk nation, being a selfish group of KU supporters, would love them both to stay. One more year.

Next up? One game at a time, Hawks. RCJHGKU

He’d just been congratulated by coach Bill Self, who told junior combo guard Taylor he’d played his best game since he’d been in college.

If TT can play close to how he played yesterday, this team will be unstoppable. Rock Chalk

Taylor playing well is the "missing link." I've said some very bad words this season when he's made some of his careless turnovers, but I'll be happy to repent if he keeps playing like that. Good job, Tyshawn...keep it up!

Congratulations to our beloved Jayhawks. Hopefully we can get one more ring this year!

Yesterday was great! The team and Jayhawk Nation brought the energy strong, and brought it for 40 minutes.

It is difficult to find much fault, if any, after a day like that, but there was one thing that concerned me, and that was the bench play. T-Rob was the only one who really contributed off the bench. The others that played had no points, a couple boards, and in some cases played very few minutes.

Even if the starters and T-Rob are playing great, the others are going to have to step up their play. We can't rely on our main guys to play 35-40 minutes in each of these games coming up. Other guys need to contribute and make our opponent wonder who they have to stop next.

Should be a great few weeks coming up. Go Hawks and Rock Chalk!!

You know, I actually took the bench play in a positive light. They've proven this season they can contribute when necessary. However, we were up by 15 at half, and when the starters can put up a good lead like that, all we really need out of our bench is for them to sustain that lead.

I know the lead dipped to 8 points midway through the second half, but the bench gave the twins some excellent time on the bench, and helped avoid a potentially dangerous situation where both twins could have had 4 fouls, or worse...fouled out.

I've seen what guys like EJ, T-Rob, Mario, and Releford (when he's healthy, don't know what's up with him atm) can do when we really need them to produce. But in a game like yesterday's, they did their job, sustained a lead, and now KU has yet another Big XII championship to show for it.

P.S.- I know it hasn't been long since the front of AFH had been remodeled to display our fine history, but how many more years do you think it will be before they need to remodel again to hold all of our new hardware under Bill Self. Putting the over/under at 4 years. :P

I`ll bet Bill Selfs office is starting to look like he is a hoarder.

@ Alohahawk: Hey man-- you guys doing ok? Been thinking about and praying for our Hawaiian brethren :-) It looks like you are... if you're busy posting away on KUSports.com lol

Doing fine. Nice thoughts from numerous posters, and well appreciated. Mahalo to all the Jayhawk Nation for your concerns.

Some one have conference & tourney titles from Roy vs Self?

I count 10 regular season and 3 tourneys.

Walt Wesley was at almost every game this tourney. Same for Miles and Simien. This is not new news.

Darrell Stuckey was also in attendance.

Darrell Stuckey will be marrying Reed's sister if I am not mistaken. Is he playing in NFL?

Any idiot can see that the all-tournament team should have been Morris, Morris, Taylor, Hamilton, and Burks.

Tristan Thompson had a decent tournament, but putting him on in place of Taylor is a travesty, and a testament to the stupidity of the news media people who select the all-tournament team.

Anyone else surprised Tyshawn didn't make the all tournament team? Easily the best player in the championship game and solid performances throughout. It seems to me the point guard running the best offense on the best team ought to get a little credit. Oh yeah he also plays pretty good D. Seems a little odd to me.

I can't believe that ref gave a technical to T-Rob (or anyone else) for yelling. He wasn't even yelling at the other team, just encouragement to his own team. Do you suppose it says in the rule book that there is to be no yelling?

Well we don't have to put up with Big 12 ref's and their foolishness anymore this season. Hopefully some of them will have achieved their goal of getting more limelight than the teams on the court and do us a favor and retire. We can only hope.

It'll be interesting to see how the national refs treat the Morrii. The tournament tends to be called about halfway between the NBA and the regular season NCAA.

That will be interesting, indeed.