Kansas Pitcher Wally Marciel (8) attempts a pickoff move toward first base. KU was hammered, 8-1, by Eastern Michigan on Saturday at Hoglund Ballpark. 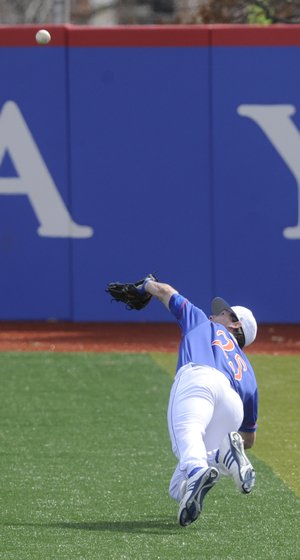 Kansas University pitcher Wally Marciel and a few other Jayhawks lingered in the dugout following Saturday’s game, their heads bowed in silence.

It was just one of those days.

The Jayhawks had a quiet day at the plate and fell, 8-1, to Eastern Michigan, which pounded 13 hits in the second game of a three-game series on Saturday at Hoglund Ballpark.

The Eagles roughed up Marciel for three runs in the first inning and knocked him out of the game in the fourth after four straight hits — including back-to-back homers — that put the slumping KU offense in a 6-0 hole.

“When you give up three in the first, it’s kind of hard to bounce back,” Marciel said, who was battered for six runs on 11 hits in only 31⁄3 innings.

Marciel fell to 2-2 after three impressive outings to begin the season, while his earned-run average ballooned from 1.89 to 5.61.

While the Eagles scored their first runs on a few well-placed singles, they seemed to have Marciel timed by the fourth inning and started teeing off.

“He’s your prototypical soft lefty. He’s got to locate his change-up and work backward with his fastball,” coach Ritch Price said. “When he was behind in the count, they were on top of his fastball every swing they put on him.”

After perhaps their best offensive output of the season Friday evening, the Jayhawks never mounted a serious threat against Eagles pitcher Steve Weber, who gave up only three hits in seven scoreless innings.

Jake Marasco extended his hitting streak to five games after smacking an RBI single in the eighth that plated Zac Elgie for KU’s only run.

Sophomore Tanner Poppe gets the start for the Jayhawks at 1 this afternoon as they try to earn the series victory.

“You can’t really dwell on it,” Marciel said of Saturday’s setback. “That’s how you get better, you learn from your mistakes.”