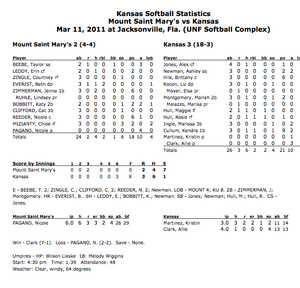 Jacksonville, Fla. — For the second time in three games, freshman Kendra Cullum drove in what proved to be the game-winning run for Kansas University’s softball team.

Cullum’s bunt in the bottom of the sixth made the difference in a 3-2 victory over Mount St. Mary’s on Friday in the opening game of the North Florida Tournament.

Kansas did all of its scoring in the sixth, collecting three runs off four hits and taking advantage of two errors. Mount St. Mary’s made seven errors for the game.

KU senior pitcher Allie Clark retired 12 of the final 13 batters, struck out four and improved her record to 7-1.

Kansas will play again this morning when it takes on Alabama State at 9, followed by Delaware State at 11:30.