Things get physical down low between Kansas players Thomas Robinson (0) and Markieff Morris (21) and Colorado defenders Austin Dufault (33) and Andre Roberson (21) during the first half on Friday, March 11, 2011 at the Sprint Center. 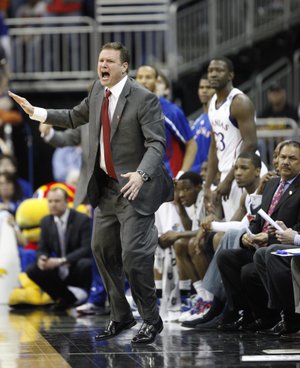 Kansas City, Mo. — Going on the assumption that Kansas University junior Marcus Morris is more of a small forward, KU sophomore Thomas Robinson was pretty comfortable with his comments about his other teammate named Morris: power forward Markieff.

“He’s the best big man in the country,” Robinson said following KU’s 90-83 victory over Colorado in Friday’s Big 12 tournament semifinals. “Whoever votes for the all-Big 12, they made a mistake by not putting him on the first team. It was obvious tonight that he was one of the best players in the conference.”

On Friday, Markieff played like he was trying to prove Robinson right. In 25 minutes, the 6-foot-10 forward from Philadelphia racked up 20 points and eight rebounds — five offensive — while also making his presence felt with a pair of blocked shots. The bulk of his final line came during a three-minute stretch midway through the first half in which he scored 10 straight points for the Jayhawks and helped turn a 24-17 deficit into a 27-26 lead.

After taking his usual spot in the starting lineup, Markieff watched from the bench during the few minutes before his solo run. In that stretch, Marcus scored seven straight to keep KU close. It was at that point that Markieff knew it was time to go.

“I hate to see him out there by himself,” he said of his brother. “If I’m not in the game with him, I don’t have that same vibe. So when I was watching him out there, I just told myself that I can do more than I was doing and then I just started playing.”

The first of Markieff’s 10 straight points came off a free throw with 10:11 to play in the first half. Next, Markieff sealed his man and received a well-placed pass from Brady Morningstar for a layup. At the 8:43 mark, he positioned himself perfectly to rebound a missed three-pointer and went right back up for another layup.

On the next trip, he extended his range a few feet and hit a jumper off an assist from his brother. One possession later, he stepped out farther and buried a three-pointer with 7:34 to play in the half to give Kansas its first lead of the game.

“I was just trying to play harder, rebounding and stealing extra possessions,” Markieff said. “I got hot and then I hit that three, and I felt like I was on a roll.”

By halftime, KU led 43-37 and Markieff had tallied 10 points and five rebounds. All but two rebounds came during that three-minute flurry.

Appropriately, the Morris twins scored 20 points apiece to lead KU into Saturday’s championship game. Markieff’s points — six off his season-high and just the fourth time he reached 20 in a game this season — came on 6-of-10 shooting from the field and a 7-of-8 clip from the free throw line. Marcus hit five of 12 shots and 10 of 12 free throws.

Though Marcus’ production nearly matched what he did Thursday, Markieff’s followed a sub-par performance in Thursday’s quarterfinal win over Oklahoma State. In that one, he scored 10 points, grabbed five rebounds and fouled out while playing just 18 minutes.

“Even though we got the victory, I felt like I let my team down,” he said. “I need to be out there at all times, especially when it’s a crucial game like that. It was fun to get back into the groove and have a good game today.”

At this point in the season, that kind of consistency is what the Jayhawks are looking for from their twin towers. As for which one starts the surge and which one follows, that doesn’t matter.

“We want them to have big nights every night and I definitely think they’re capable of that,” KU senior guard Tyrel Reed said. “They’ve come to be some of the most consistent players I’ve ever played with and I don’t ever hope one of them is on. I hope both of them are on.”