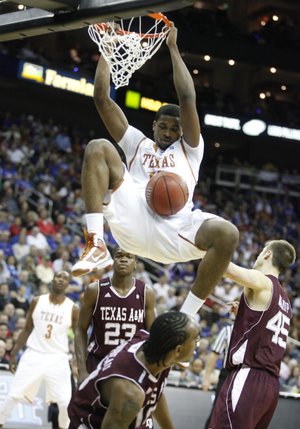 Kansas City, Mo. — With three-game sweeps this season of both Oklahoma and Texas A&M, No. 10 Texas has already accomplished something it had never done before.

Now, with No. 2 Kansas looming today in the Big 12 title game, the Longhorns have a chance to do something else for the first time.

If they beat the No. 2 Jayhawks, they’ll be the first team from the Lone Star State to capture the championship in the 15-year history of the Big 12 tournament.

“It would mean a lot,” said Texas guard J’Covan Brown, who had 14 points Friday night in a 70-58 semifinal victory over Texas A&M. “We have to go out there and have fun, like coach said. If we execute, everything else will take care of itself.”

“Each time we played (A&M) the scoring margin got closer and closer,” Texas freshman Tristan Thompson said. “We knew this game was not going to be a blowout. They were playing to play in the game tomorrow, so we knew we had to come out and play our best game ever.”

Thompson, the Big 12 freshman of the year, had 14 points and 13 rebounds for Texas, which finished second to Kansas in the regular-season Big 12 race but beat the Jayhawks 74-63 in January, snapping their 69-game home court winning streak. Cory Joseph scored 10.

In the second half, Brown, Thompson and Hamilton scored 31 of Texas’ 40 points. Then, when the game was all but decided, Gary Johnson scored the Longhorns’ last six points.

Khris Middleton had 18 points and eight rebounds for A&M.

“For us to get where we want to be as a program, where we think we belong, we’ve got to beat a team like Kansas or Texas,” Texas A&M coach Mark Turgeon said. “We’ve got to play 40 minutes, not 37 or 32 or whatever we’ve done.”

Middleton had a three-pointer, a breakaway dunk and a follow off his own offensive rebound, then converted the free throw in a 12-4 Texas A&M run to start the second half and wipe out Texas’ 30-24 halftime lead.

But the powerful 6-foot-8 Thompson got a bucket to tie it 36-all. Ten of Thompson’s rebounds were offensive.

“Are you kidding me, how good that kid is?” Turgeon said. “We were trying to box him out and he jumps over you. Then the shots he made were tough, tough shots in the second half.”

Brown swished three three-pointers in a 16-5 Texas run, capped by Jai Lucas’ runner in the lane, and the Longhorns went ahead to stay at 52-41.

Thompson was whistled for an intentional foul less than 7 minutes into the game and Dash Harris sank one free throw, giving the Aggies a seven-point lead.

But Hamilton answered with a long three-pointer and Thompson, on successive possessions, got a slam and a short bucket to start a 13-2 run. Hamilton hit two more buckets and Joseph drove in for a layup and a free throw, putting the Longhorns on top 20-16.

David Loubeau, who had 20 points in the Aggies’ 86-71 second-round victory over Missouri, had just four points in the first half on 1-for-7 shooting and finished with 12. B.J. Holmes had 11 points for Texas A&M, which was outrebounded 39-28 by the taller Longhorns in their 220th meeting.

Should be a good one!

"It would mean a lot," said Texas guard J'Covan Brown.

It would mean a lot to the Jayhawks to avenge the only loss at AFH which stopped our 69-game home winning streak.

I am thinking that this is going through all the Jayhawks heads when they play the game tonight. Not hard to get up for this game, and with the pro-KU crowd, let's bring on the cow meat. Rock Chalk Jayhawk!!!!!