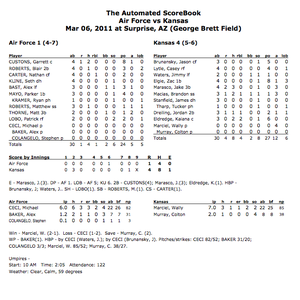 Surprise, Ariz. — Senior left-handed pitcher Wally Marciel allowed just one run over seven innings, and third baseman Jake Marasco went 3-for-4 with a pair of runs scored as Kansas University snapped a three-game baseball losing streak with a 4-1 victory over Air Force on Sunday at the Coca Cola Classic.

The Jayhawks went 1-3 in the tournament and moved to 5-6 overall. The Falcons fell to 4-7 overall.

Kansas used a big second inning and a dominating performance by its senior lefty Marciel to earn their fifth win of the season.

Marciel, from Kailua, Hawaii, allowed one run off three hits, with two walks and two strikeouts. He did not allow a base hit through the first 41⁄3 innings and held the Falcons to just five base-runners in seven innings.

Jayhawk closer Colton Murray picked up his second save of the season, pitching the final two innings. The junior righty allowed one base hit, but struck out four, including the last three in the ninth.

Kansas starting pitchers Marciel and T.J. Walz — who had a quality start Saturday evening against No. 7 Arizona State — were named to the Surprise Classic All-Tournament team.