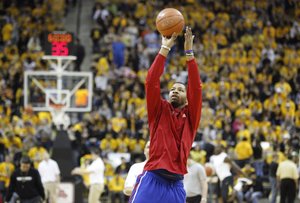 Kansas coach Bill Self talks to reporters following the Jayhawks' 70-66 victory over Missouri on March 5, 2011.

Columbia, Mo. — In need of a big basket in Saturday’s game against Missouri, Kansas University’s basketball team turned to its senior go-to guy ... Tyrel Reed. Who else?

“We had nothing going on, no juice with a minute left, and Tyrel makes the biggest shot of the game,” KU coach Bill Self said after the Jayhawks’ 70-66 victory over the Tigers in Mizzou Arena.

“I said, ‘Let’s run ‘C’ and get Tyrel a shot in the corner, and he said, ‘I’ll make it,’’’ Self added, relating how Reed, ala Babe Ruth on his home run to center field, actually called the shot.

That three came out of a timeout.

“We were in the huddle. It’s not really a play. It’s one of our sets,” Reed said. “I don’t know who it was (who) set a good fade screen for me in the corner. I told coach I was going to knock it down. He said, ‘Make the shot.’

“I did and am happy about that,” added Reed, who finished with 11 points in 37 minutes.

A fired-up Reed stared in the direction of, and may have yelled something at, MU’s raucous student section, the “Antlers,” after hitting the critical three.

After the game, KU’s Marcus Morris waved to the Antlers before hopping in the hand-shake line with MU’s players.

“It means a lot. Every year it’s our goal to win the Big 12 championship. It looked like we weren’t going to a few weeks ago,” Reed said.

The Jayhawks were two back of Texas with three weeks left in the season.

“We were fortunate, caught some breaks and won it. I’m happy the way we competed today. I thought we played dumb (24 turnovers), turned it over a lot, but defended all right and found a way to win,” Reed said.

Antlers must have loved the recognition from both Reed and Mc Morris. Would have been apropo if the salutations were of the one finger type. You know: : Ku is #1, or another, more recognizable gesture. :-)

“We had nothing going on, no juice with a minute left, and Tyrel makes the biggest shot of the game,” KU coach Bill Self said after the Jayhawks’ 70-66 victory over the Tigers in Mizzou Arena.

“I said, ‘Let’s run ‘C’ and get Tyrel a shot in the corner, and he said, ‘I’ll make it,’’’ Self added, relating how Reed, ala Babe Ruth on his home run to center field, actually called the shot.

Ha! I so want to know what Reed said. :) And Marcus giving a wave, perfect! I had a Mizzery fan ask if the Morris twins could count to a 100. Wow, jealous much? I can only imagine the things that were yelled at our guys during that game; poor guys had to play in that rotten stench of a hole...no wonder Elijah was puking in the trash can.

I couldn't believe the students were chanting "DUI" when Brady was at the line. I didn't expect anything less from them though. Just glad Tyrel smashed that three on them.

Most student sections of our conference foes have chanted "DUI" at Brady in the last 2 seasons. It was loud and clear at OU last Saturday.

I just hope Brady yelled DOA to them afterwards because that's what they got from their team....

All very true, though Brady certainly enjoyed getting knock over on the baseline http://www.youtube.com/watch?v=L_KcnYSfZhM with 42.9 seconds left. :-)

Yeah I can't believe he got clobbered like that and there was no foul, but Marcus gets an intentional foul for reaching for the ball and barely touching the guy on the wrist. Oh wait.....I can believe it. That's been the state of basketball officiating this season. It's gotten so bad that I don't even know what the rules are anymore.

Yep, my son and I just look at each other with questioning looks and don't even try to figure out foul calls anymore. Just try to enjoy games as best we can and hope the JHawks can overcome the stupid foul calling.

Thanks for posting the link. I thought I would never get to see the final minutes of the game. First of all, I think we should all boycott CBS coverage of anything until the NCAA tourney (when we have no choice.)

Self needs to file a formal complaint with the Big 12 office over the intentional foul call. The twins are having so many calls go against them now, simply based on reputation, it is just crazy. They deserve a lot of the calls against them, because often they don't move their feet, but some of these calls are totally unjustified. No other players in America are under the unfair scruitny the twins are under. It needs to stop. Actually the carrying call on Marcus was just as bad as the intentional foul call. I'll be glad when Big 12 play is over, and we get refs from other conferences, who hopefully won't be so aware of the so called reputation they have.

If that was an intentional foul, they should call the same on all the fouls losing teams make in the final seconds. He made a grab for the ball and got the guy's arm. Big deal.

Thanks but where's the end? My version stops at our timeout before Reed's 3. Is this right? Thanks again for the effort.

Great call, ancient! It is a perfect reminder of Jimmy Chitwood.

The "Picket Fence" For Jimmy, "I can hit it coach".

There isn't a basketball fan in the world (except maybe the banjo playin inbreds from columbia) that wouldn't say there was some hometown calls going on in the last 4 minutes in Paige arena! That was a joke!

I have said it many times this season, and I will say it one more time-----I would not trade Tyrel Reed for anybody----he can play on my team anytime, anywhere! Rock Chalk!

I didn't see the last 4 minutes until today, due to the "sun spots" that assaulted the Midwest; however, while I thought it was questionable, I wasn't as upset with the intentional foul when I saw it as I was when I heard it from Bob. There were certainly more "intentional" fouls committed in the last couple minutes, but the Misery player did have a breakaway, and I wouldn't have thought the call was as bad were it called against our opponent. Now. I still haven't seen the palming call, but I don't think I've seen a palming call all season, so that had to be questionable at best.

If you haven't listened to Bob Davis's and Chris Piper's reaction to the phantom intentional foul call on Mc Morris, you should. That's why I love Bob Davis calling the games -- PASSION!!

Did anybody see Bowers shove TRob late in the game & later see Tyrel get shoved into the MU cheer squad? Both happened after a dead ball and were just UNCALLED FOR (and totally ignored by the refs)! I know its the Border War, but Mizzou-try to show at least SOME sportsmanship! (This is also why MU loses on the road, but wins at home where they can get away with this behavior).