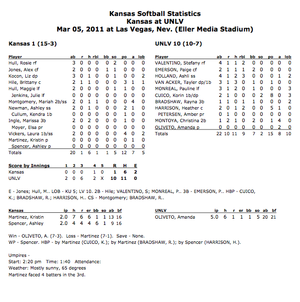 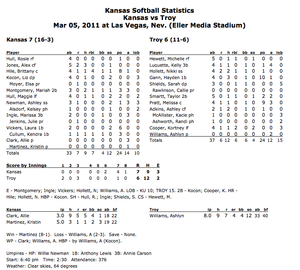 Las Vegas — Kansas University was bombed by UNLV, 10-1, but rebounded for a 7-6, eight-inning victory over Troy later Saturday on Day Two of the Eller Media Stadium Classic.

In the opener, UNLV (10-7) started with two runs in the bottom of the first inning on four hits and then gained momentum to pull away with six more scores in the third. The Rebels also took advantage of three walks and two hit by pitches in the frame to take an 8-0 lead.

Montgomery drove in Kansas’ lone run of the contest with a single in the top of the fourth inning. Her shot up the middle plated senior Brittany Hile, who led off the inning with a double to deep left-center field, her third-straight game with a two-base hit.

Freshman Kristin Martinez threw the first two innings to suffer the loss, her first of the year, as she fell to 7-1. Junior Ashley Spencer tossed the final two innings of the contest giving up four of the Rebels’ 11 hits.

Kendra Cullum drove home the game-winner in the eighth.

Trailing 5-2 after six complete innings, senior Brittany Hile smashed a grand slam over the left field wall in the top of the seventh to give KU a 6-5 edge. But Troy’s Nikki Hollett hit a solo round-tripper in the bottom of the frame to knot the score and send the game into extra innings.

That best start ever was clearly a reflection of our opponents, not our talent.

For those of you scoring at home the softball team has flown to Florida, North Carolina, and now Vegas. Sounds fiscally responsible, right?!?!?!?!?!?!?!?!?

You need to pay attention to weather conditions in KS during mid-Feb thru end of March. Not enough domed stadia in that region to allow many meaningful softball or baseball games until April.

ahperse...I challenge you to go to the Big 12 site and look over the schedules of the top teams. Every team's record is reflective of their schedule.The thing is ...we won whereas in the past few years ..we didn't.Why are you so negative? I have been seeing your comments on here and you don't seem to know that much about KU softball ..how can you degrade their talent when ,I doubt if you've even seen them play. As far as being fiscally responsible..ever heard of Title 5? I'd like to see you try to hit a ball with a bat in 30 degree weather and then say that the places they play shouldn't require "airfare" to get there. We may not win the Big 12 ,but we're doing better than we have.ROCK CHALK JAYHAWKS !!!! Keep it up girls.