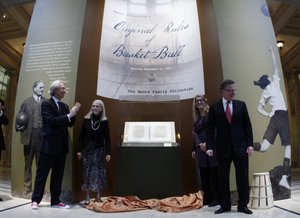 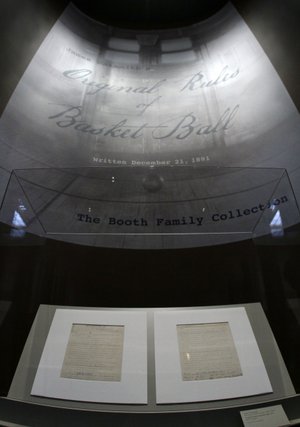 David Booth and his wife, Suzanne, purchased Naismith’s “Original Rules of Basket Ball” in December for $4.3 million in a Sotheby’s auction with the intent of eventually putting them on permanent display on the Kansas campus.

But first, they’re on display through May 29 at Kansas City’s Nelson-Atkins Museum of Art, where the nearly 120-year-old document is more than two centuries younger than the eight huge Jan Leyniers tapestries that adorn the giant hall’s walls. They were officially unveiled Friday afternoon in a ceremony attended by Booth family members, members of the Kansas athletics staff and the media.

Museum director Julian Zugazagoitia said having the rules displayed at Nelson-Atkins will bring a whole new audience to the facility to see not only the basketball documents but the works of art spread throughout the museum.

Zugazagoitia, who has been director of the museum for six months, said he has been fascinated by Kansas City’s love of all sports — especially basketball.

“Here you have a game that was invented, the man lived to see it go to the Olympics, which was also an amazing feat, and what a better thing than someone that is also so close to home,” he said.

Naismith penned the 13 rules on Dec. 21, 1891, for the YMCA training school in Springfield. His boss had given him two weeks to come up with a new indoor activity for his gym class, and he wrote down the rules on the eve of that deadline.

He gave the list to his secretary, who typed them up on two pages that Naismith pinned on a bulletin board outside the gym.

He moved to Lawrence in 1898 and became the first basketball coach at the University of Kansas. He coached for nine seasons before assuming other academic duties and serving as athletics director.

One of his players was Forrest “Phog” Allen, who went on to become popularly known as the “father of basketball coaches.”

The two are memorialized on the University of Kansas campus, where the basketball court at Allen Fieldhouse is named James Naismith Court.

Naismith died in 1939, three years after his new game became an official sport at the 1936 Summer Olympics in Berlin.

Booth, a Kansas graduate who now is a Texas businessman and major university donor, said he attended high school in Lawrence and lived at 1931 Naismith Drive. He noted that Naismith signed the bottom of the original rules in 1931, 40 years after they were typed.

In true Jayhawk fashion, Booth couldn’t help but take a couple of lighthearted jabs at Missouri during the ceremony.

“I went to high school at Lawrence High,” he said. “That’s where we learned of the Civil War and how some evil people from Missouri came over and burnt down Lawrence. I approach this with a little bit of trepidation.”

Josh Swade, an avid Kansas basketball fan who attended the university and now is a television producer in New York, played a big role in persuading the Booths to purchase the rules. As did Phog Allen’s grandson, who went to the Booth home days before the auction to urge the family to bring the rules to Kansas.

“Dr. Mark Allen, grandson of Phog Allen, called us up and said he’d like to come down and have dinner with us,” David Booth said. “That was a Wednesday night before the auction. He came to Austin and really impressed us with how important it was that these come to KU, so we decided to bid on it.”

Swade is working on a video documentary of the path the rules have taken, from Swade’s efforts after he heard last year the rules were going on sale to the Booths’ winning bid via telephone in the Sotheby’s auction.

Swade said he was in David Booth’s conference room during the auction, as was former basketball great Bill Bradley, a friend of the Booths.

“We were joyous, we hugged and had champagne,” Swade said of the reaction after Booth’s successful bid. “We were a very happy group.”