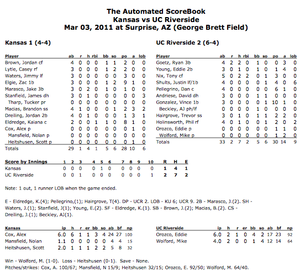 Surprise, Ariz. — Freshman Alex Cox pitched six strong innings and Jake Marasco collected two hits, but it was not enough for the Kansas University baseball team. UC Riverside’s Tony Nix singled home the winning run in the bottom of the 10th inning as the Highlanders topped the Jayhawks, 2-1, Thursday afternoon in the Coca Cola Surprise Classic at George Brett Field.

KU snapped its three-game winning streak and fell to 4-4, while UCR improved to 6-4 with its fourth straight win.

Kansas fell in extra innings for the second time this season. The Jayhawks produced their only run in the fifth when Brandon Macias and Jordan Dreiling both reached base on errors and Kaiana Eldredge hit a sacrifice fly to left to tie the game at 1-1.

KU put the go-ahead runs on base in the top of the 10th, but Macias’ long fly ball to center field was hauled in just in front of the fence with two outs.

The Highlanders scored the winning run on a lead-off walk, a sacrifice and Nix’s single to center with one out.

Cox, making just his second collegiate start, went six innings allowing one run on six hits with a walk and four strikeouts. He became the fourth Kansas pitcher to record a quality start in the team’s last five games.

Marasco collected two of KU’s four hits, including a leadoff double in the seventh.

KU will look to bounce back Friday when it takes on Cal State Bakersfield at 5 p.m. in Surprise, Ariz.