Kansas guard Tyshawn Taylor knocks the ball away from Texas A&M forward Naji Hibbert during the first half on Wednesday, March 2, 2011 at Allen Fieldhouse.

Turgeon urges Ags to ‘embrace it’ 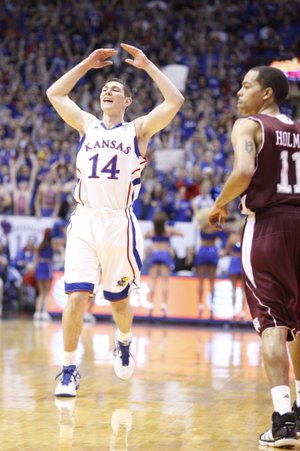 Kansas coach Bill Self talks to reporters after the Jayhawks' 64-51 victory over Texas A&M on March 2, 2011.

Peer beneath Wednesday’s Senior-Night speeches, the outstanding final home performances of Brady Morningstar and Tyrel Reed, the spectators stopping and taking a look back at the Fieldhouse on their way out because they knew they wouldn’t see the inside of it again until Late Night in the Phog, and what remained was an encouraging sign from the nation’s second-ranked basketball team.

It doesn’t always have to run up huge offensive numbers or dominate the interior to win games. It can grind its way to victory, too. That’s exactly what Kansas University did in defeating Texas A&M, 64-51, to clinch at least a share of the Big 12 title and run its record to 28-2 overall and 13-2 in conference play.

For a change, the Jayhawks weren’t a spectator’s delight in this one. At halftime, about the only thing that could have riveted the crowd would have been a video playing on the scoreboard featuring tips to combat boredom.

It takes more than style points to win NCAA Tournament games. It takes grinding away on days either too many whistles or defensive game plans too well-executed throw elite teams off their games.

The defense swarmed Marcus and Markieff Morris. It took them both awhile to figure out how to get through the maze to produce, and they figured it out. With so many defenders in the paint, accurate outside shooting was required, and Kansas delivered by hitting eight of 17 three-pointers.

“The game had no rhythm,” Kansas coach Bill Self said. “It was an ugly game. That’s how (the Aggies) had to play to give them the best chance. And I actually thought we guarded them very well. I thought we did a good job muddying up because we’ve been a pretty team. I thought today we were much more equipped to win a game with no rhythm. That was good for us.”

Reed has played in enough NCAA Tournament games to know that advancing when dancing requires doing it with some ugly ones now and then.

“That’s going to help us out down the road,” Reed said. “Those are tournament-type games, where shots aren’t falling, you’ve got to grind them out, can’t really get in a rhythm. It was probably a good game for us.”

It definitely was an important game for KU.

Instead of making 60 percent of their shots, which is their remarkable season average, the twins made 50 percent. Nobody panicked, and the seniors from Kansas hit crucial shots. Morningstar and Reed combined for eight steals and made seven of nine shots and five of seven three-pointers.

The Jayhawks finished the game the way prize fighter Oscar De La Hoya used to finish bouts. The instant De La Hoya smelled blood, his fists flew faster and stung harder. His legs became fresher, his focus sharper. His nickname was The Golden Boy. Others accused him of being a pretty boy, but there was nothing remotely beautiful about the way he flattened noses, swelled eyes shut and generally carved faces into bloody messes. The first sign of vulnerability in the opponent energized De La Hoya. The same could be said for Kansas in its home-court finale.

Reed and then Morningstar hit consecutive threes that started KU on a 21-10 finish that covered the last 10 minutes. The twins’ shots started falling, and their defense toughened. Elijah Johnson, batting a thousand in his three games as the team’s starting point guard, blocked a shot, denied his man the ball, setting up steals for Reed and Morningstar, threw down a perfect lob from Marcus Morris and played like a point guard who was in no hurry. A much tougher test awaits him Saturday in Columbia, against Missouri, one of the nation’s toughest teams when playing at home.

“I thought that we buckled down at the end,” Marcus Morris said. “We started guarding toward the end, when we really needed it. We got stops and rebounds.”

Everything’s easier at home, and the players know that. That’s why they sounded so eager to prove they can bring that finishing act on the road Saturday in search of an outright Big 12 title.