Kansas runner Jake Marasco, left, is caught off base after Southern Utah caught a line drive and doubled him up at second base. Nonetheless, KU swept Southern Utah on Tuesday, March 1, 2011 in a doubleheader at Hoglund Ballpark. 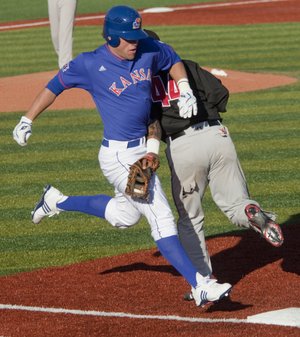 Kansas runner Zac Elgie runs safely to first base after the ball bounces off the Southern Utah first baseman's glove in the fifth inning of the first game of a double-header Tuesday, March 1, 2011 at KU's Hoglund Ballpark. 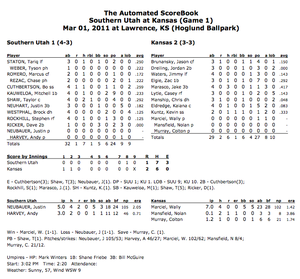 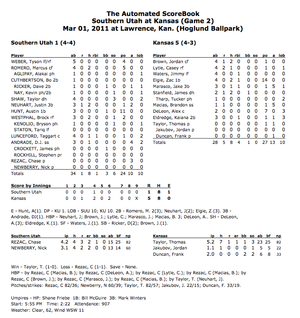 Macias tied the school record in his three times getting plunked.

Kansas put up eight hits in the nightcap: Elgie, James Stanfield and Jordan Brown had two a piece. Elgie’s third double of the season broke a scoreless tie in the bottom of the third and gave Kansas a 1-0 advantage.

After Southern Utah tied the game in the top of the fourth inning, KU answered with two runs in the bottom of the frame on a squeeze bunt and throwing error.

KU’s bullpen allowed just one hit over the final 31⁄3 innings. During the Jayhawks’ four-game homestand, which began on Feb. 22, KU’s pitching staff is sporting a 1.46 earned-run average. Starting pitchers have allowed one or no runs in all four starts.

Kansas will take on UC Riverside at 5 p.m. on Thursday in the Surprise Classic in Surprise, Ariz.